When last we left Green Arrow & Co., they were puttering around the waterfront in the  awesome and highly visible-to-crooks ARROWCRAFT, enjoying the salt air and hoping that their luck would hold out. That is, that they wouldn't run into any pirates and could look forward to an early dinner and cocktails at The Salt Line.

As luck would have it, however, something terrible happens!

An armored car with money-hating drivers is driving through a local trans-riparian tunnel, when...


It's attacked by a TOMATO PASTE AVALANCHE (#nextquartetname)!

Actually, that's water from Star City's West River overhead. Now, if you ask me, the fact that your city's rivers run red with blood or toxic pollution or crimson dinoflagellate luciferin is a WAY bigger problem then the Pirates of Penzance on your periphery, but, hey, I'm not the mayor of Star City. I mean, what kind of idiot would want THAT job?

Anyway, I suppose any number of Star Citizens drown in delicious pasta sauce so that the pirates can get their hours in toward their deep diver certifications.


Robbing stuff underwater was the height (depth?) of cool for Golden Age villains. All the greats did it. The Riddler.  Two-Face. The Octopus. Captain, um, whoever this is. Kilg%re?  Something like that.

Meanwhile, the boy in red is ECSTATIC to hear that the tunnel has blown up, killing scores of people and giving him the chance for 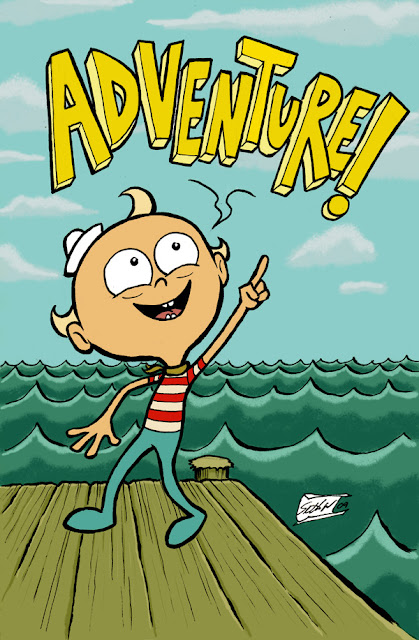 FLAPJACK. That's Green Arrow's chum's name; how do I keep forgetting that?

But the pirates are prepared to meet them... armed with TORPEDOES! Which they somehow fire from an ancient sailing ship! Did they use a big archery bow because Star City? I bet they used a big archery bow.

Luckily for him, Ollie is armed with MORE than just impeccable grammar, and an arrow hitting a torpedo is enough to cause


Oh, well; scratch 'torpedo' off the list of 1001 Ways To Defeat Green Arrow.

I'm concerned about the resemblance waterproof sacks of money have to a random mansion, with lots of eaves and a couple of chimneys, clearly the worst kind of pareidolia.

Also glad you picked up on the weird Kilg%re reference, since this is clearly the Pre-Crisis version, presumably related to how what I assume is a "paddle-torpedo" is defeated by Roy. If you've seen Roy's origin story, this is an interesting callback, since the whole point of it was that he's a far better and faster archer, who's only really slumming with Ollie because the big, manly hero cheated in a contest.

Which is all to say that the torpedo probably would've worked against Green Arrow himself; it's just that he's unique in having a sidekick who (no matter how irritating) is far more talented than he is.

Speedy's superiority to his mentor is unique to DC, John. The Green Hornet was also blessed with a sidekick that was clearly better than the Hornet. Hong Kong Phooey and Spot. Hmm. Who else?

That's a fair point, Bryan, though I think the field probably narrows when the hero and sidekick are working with the same sorts of abilities. The Robins are probably the clearest example, where a lot of them have their "thing" where they're allowed to complement Batman instead of supplementing him (acrobatics, hacking, willingness to murder...), but they're trainees in the pursuits Batman has claimed for himself, like detective work, martial arts, or plans to destroy the Justice League that he should know will eventually get stolen.

"But the pirates are prepared to meet them... armed with TORPEDOES! Which they somehow fire from an ancient sailing ship!"

It's a super-advanced sea vessel that only LOOKS like an ancient sailing ship. Cap'n Kilgore was the Wind Pirate before there was a Wind Pirate.