So, ordinarily long about now I'd be posting about something like, say,

But current comics have trumped that urge. Specifically, the utter insanity that is the whole "Metal" crossover.  Now, there's all sorts of lunacy I could discuss in a crossover that has evil Batmen modeled on various JL characters coming from the dark multiverse on the blacked out flipside of Grant Morrison's Multiversity map to attack our multiverse.


But, instead, I'm going to focus on Hawkman's role.  Or, more accurately, what the writers seem to be using the crossover to do with him.

As longtime readers of the blog will know, I started this blog for exactly two reasons.  One: I didn't enjoy anyone else's blog enough, so I figured I should write one I would enjoy.  Two: to discuss my pet literary theory, the Dynastic Centerpiece Model (specifically, that in order to become and remain iconic, any comic book protagonist needs to be the centerpiece of his or her own constellation of locations, issues, and related characters).  It's not a revolutionary concept, it's not an original concept; in fact, it's rather obvious.  But it's truly amazing how many characters have been doomed by writers willing to ignore it or actively flaunting it.  For a character to have any hope of becoming iconic, you must build a world tailored around him/her, rather than merely trying to fit the new character into a pre-existing universe.

Not all the potential elements of such a world have to be in place.  Not every hero needs to collect a permanent full set of tropes: The Older Authority Figure, The Junior Partner, The Civilian Love Interest, The Comic Relief, the Ethnic/Other-gendered Counterpart, The Physical Threat, The Mocking Foe, The Intellectual Threat, The Dark Mirror, et al.  For example, rarely does Batman have a Civilian Love Interest (notwithstanding Vicki Vale), Wonder Woman a Male Counterpart (notwithstanding Warkiller), the Martian Manhunter a Junior Partner (notwithstanding Miss Martian).  And not all of the elements used in building a world around a dynastic centerpiece  have to be completely original; they can be ones that were previously unaffiliated but can be repurposed by serving a role in the main character's mythos. For example, to build a world for the CW's Flash, its creators re-purposed, of all people, Vibe (Cisco Ramone) and Killer Frost (Caitlin Snow). Completely ridiculous and counter-intuitive...yet wildly successful.

I've long thought that DC would benefit from the mental exercise of picking X number of iconic characters and then "arranging" ALL other characters "underneath" them.  Some of you are already typing "but but but the wonderful variety and diversity of the multiverse would be spoiled by trying to box in into arbitrary lines of business....!"  To which I say:

The DCU Online game does pretty much exactly that: superheroes under Superman, magic heroes under Wonder Woman, normal heroes under Batman; boom.  Heck, I have to do it just to organize my Heroclix collection.

That process alone -- organizing my Heroclix collection -- has made it very clear to me how success/failure in apply the principle of Dynastic Centerpiece Model to certain characters has result in the success/failure of the character.  I have to have TWO boxes for Flash Foes. But my box for Martian Manhunter Foes required some pretty broad interpretation of "foe".  The Atom and Hawkman don't even have separate boxes for their foes, and, under a recent effort of get custom figures for some of their enemies, ALL of BOTH the Atom and Hawkman related figures together didn't fill up a box.

But "Metal" seems to be aiming to fix that for Hawkman. 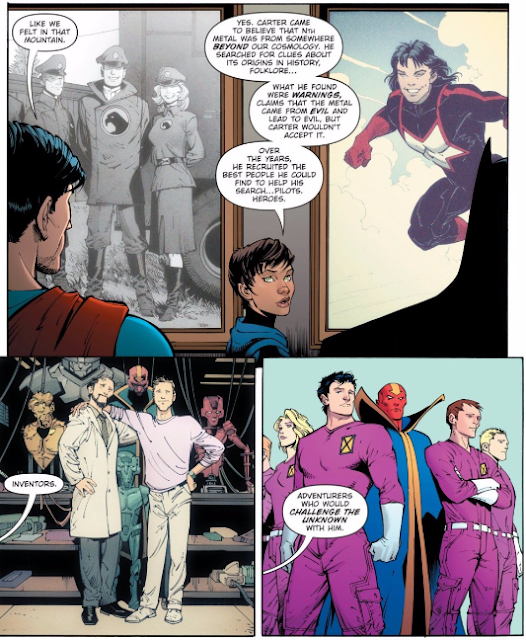 There is, as I mentioned, a GREAT deal going on already in the Metal crossover (like the Joker trying to save the multiverse).  But, here on one page, the writers have put the Blackhawks, the Challengers of the Unknown, the Metal Men (with Will Magnus), Red Tornado (with T.O. Morrow), and, of all people, the Will Payton Starman, under Hawkman's metaphorical wing.  Already all those characters (not among my favorites, as you may know) are suddenly more interesting to me because they are part of a larger story.

I still recall the amazing period around 2005 when Palmiotti & Gray did wonders with Hawkman and Hawkgirl and their suddenly awesome rogues gallery; but it all fell apart out of their creative hands.  I'm hoping that with "Metal", DC is going to put Hawkman at the center of new dynasty of adventurers.

Hmmm, adventurer / explorer IS a pretty good niche to fill with Hawkman. It seems more viable than trying to make him a superhero when the one power he's got is the one thing that every other hero can do better. It also means that Hawkman is more about his mind than about his medieval weaponry.

Nice takeaway. I only caught the theme 'Only Batman Is Competent', which was enough to decide to skip the rest of the Event...

"Metal"? Wow, and I thought Marvel was doing badly coming up with crossover names...

I've always liked Hawkman, and I still favor the "Indiana Jones with wings" interpretation of him. I hope we end up back there again.

The only Hawk I've ever liked was the silver/bronze age Hawkwoman, into the Giffen/deMatteis JL, but it looks like she's never coming back.

Bryan, I think we are there right now, without Hawkman himself even having yet appeared.
This Hawkman seems to personify civilized exploration; a much more useful characterization than The Savage Hawkman.

I've long favored a more historical approach wherein characters originally associated with the "big three" retain that connection going forward. Superman's retinue includes Supergirl, the Legion, Vixen, Thorn, and most unfortunately, the New Gods.* Batman's frequent team-ups have afforded him the Creeper, Black Canary, , Wildcat, Deadman, and a number of others. The Animated Series gave him Zatanna (and what a lovely thing to be given.)
Green Arrow and Aquaman could move more freely between the World's Finest families due to their long runs in Adventure under Superboy and their frequent appearances in Brave and the Bold. Overall, I'd tend to give Green Arrow to Batman since their pairings were so repetitive and Aquaman to Superman since, y'know, mermaids and stuff. And the Filmation series. And neither wears a mask.
Wonder Woman has long been kept off in her own little mythological (read "girly") corner of the DCU for most of her existence, but she is the one who was a frequently appearing member of the JSA and has Golden Age ties to Green Lantern and the Flash through the Comics Cavalcade title. Of course, at a moment's notice she could summon to her side the entire array of DC's heroine population and has done so a couple of times with "Judgement In Infinity" and the JL of Amazons.
I prefer it when "dynasties" arise organically from more naturally occurring story and publishing considerations rather than simply being cobbled together from scraps, leftovers, and whatever arbitrary materials are at hand. Structures haphazardly assembled can come apart just as easily.
It's also worth noting that Cisco and Caitlyn on the Flash series are merely exemplars of the "Any Name Pulled Out Of a Hat" television phenomenon and bear only slightly more resemblance to their forebears than Snapper Carr or James Olsen. See also: "Ned Leeds."
* Also, the much-beloved, much-missed Human Cannonball. I didn't mention him above since he tends to steal the spotlight from whatever else is being discussed, but that lovable, heroic goof damn near stole Lois away. Or he might have. He was making some inroads there. Softening her up. There is no Human Cannonball vs. the Purple Piledriver match-up, is there, where the two go head-to-head? Literally. So much potential...

I didn't mean to imply that I favored the division that DCUO uses, Brian. It was merely an exceeding simply example of how such things can be done. Like you, I would favor a historical approach. And such associations can vary over time. A reader will associate Black Lightning with Superman. Batman, Green Arrow, or Blue Devil, depending on when they began reading about him.

I have a question to pose to Scipio:
How would you handle a Dynastic Centerpiece for a GROUP of heroes that never really go solo? I get that you can do the Injustice Gang All Their Archenemies On The Same Team, and the Contextualizing City That Just Happens To Have A Neighborhood That Reflects Each Hero, but what else is there?

I've been boning up on the past articles on Dynastic Centerpieces, and the ideas are a'flyin'! Thanks, Scipio!

I'm going to toss out a notion, we'll see how right I am. Remember the undead Talons serving the Court of Owls? What is responsible for their reanimation? Thus far, the answer is that they have electrum (a gold / silver alloy) in a tooth, and somehow that makes it possible to reanimate them. Nobody anywhere liked that explanation, and I bet it chafes Snyder no end.

At some level, the goal of this series will be to retcon the Talon resurrection formula into gold, silver, AND Nth metal. It might be presented as just a throwaway observation, but that's what's at the heart of this.

Kind of like how "Breaking Bad" is Jesse's long and rambling answer to the question: "cool El Camino bro, where'd you get it?"