My impressions of "Man of Steel"


Metropolis must be really, really big. Because they have LOTS of buildings to spare.

Okay, fine, there's a "Jenny" but no one actually says her last name, so all you fanboys can just chill out.

This is going to sound like no matter how I put it but: Russell Crowe makes a great artificial intelligence.

Can Hollywood not find an actual WOMAN to play Lois Lane, rather than these snub-nosed little girls?  Their last two LLs didn't seem as though they could intimate a copy boy, let alone high-ranking military and politicians.  Superman is finally portrayed as appropriately powerful; I wish Lois had been, too.

That said, good on the writers for letting Lo-Lo be a smart enough reporter to figure out who Superman was before she even met him.  THAT was what made Lois impressive.

I must confess, I believe that if someone saves your life at the risk of their own, you should probably go to a basketball game with them if they ask nicely.

One of the best things about Cavill's Superman: he doesn't talk much.  He's all about action.  He has an occasional "and that's why you get earthquakes in California from time to time" speech as the plot requires, but on the whole he refrains from gratuitous chatter and commentary.  And when he does talk he gets to the point immediately.

Did Pete...?  Okay, someone needs to tell me what happened with Pete.

Perry White has an earring. BWHAHAHHAHAHAHAHA!  Earrings are the new cigars.  Eagerly awaiting a re-telling of that classic tale, "The Super-Earrings of Perry White".

CAVILL IS A HUGE FREAKING BEAST OMFG.  Thank you; that is what Superman should look like. 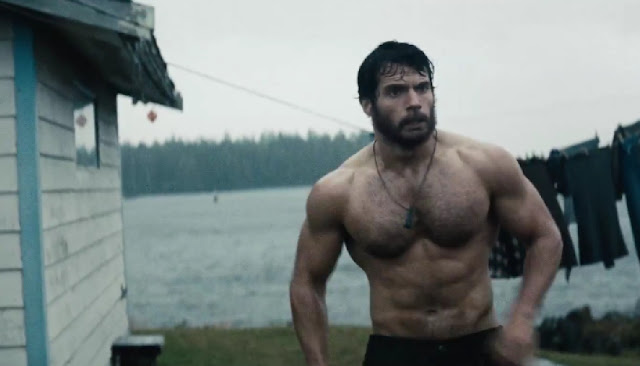 Rusty? LMAO.  Someone on staff has a very good memory.

I don't envy the Heroclix designer who got the short straw and had to come up with dials for Lara and Kelex.

The set piece where the Jor-El AI is telling the story of Krypton via liquid metal WPA-style friezes was not only beautiful, haunting, and riveting it was an ingenious way to evoke the period of the Superman character's literary birth.  Kudos to the production team for even THINKING of it, let alone making it happen.

Great job in showing that every super punch or huge object hurled had real-world physical ramifications, like concussive blast areas and shrapnel. Too often in other films we'd get video-game physics instead.

To whatever British people were involved in this production; next time, please ask an American how "Kelex" should be pronounced.

For those of you who cheered; you DO realize that that's a rig, not a pick up, and that it almost certainly belongs to a blameless trucking company owner, and not the driver, right?

So, who programmed the Jor-El AI with a 'leather clothing sound effect'? Because that seems like an odd thing for a hologram to have.

There was a nice steady drumbeat other regular humans doing very heroic things despite their vulnerabilities.  This was very welcome.  As a result, Superman would up seeming so human precisely because he IS heroic.

Okay, I know the kind of big city folk who live Metropolis tend to be kind of blaise, but really now...  How many hours of alien invasion / gravity wave pounding / superperson battle does it take before they leave the damned area?

My first thought upon seeing Clark Kent on fire was, "Oh I feel EXACTLY the same way!"

Pa Kent's demise was unlikely and convenient and, yes, very comic book-y.  But it IS a comic book story.  And I'm not ashamed to say that in the two seconds in took me to figure out what he was saying/doing, that tears came to my eyes.

I felt for Zod during his final speech.  Although it didn't exonerate him for his wrong-doings and immoral choices, he was clearly no Faora.  And it made you realize concretely the failure of Krypton's caste system; we're given the impression that Zod didn't have a real chance at being anything OTHER than Zod.

You've surely already heard praise for how well the film does in conveying the power and scope of Superman-level battles.  I'll aim my specific praise at how superSPEED is conveyed.  Even though it's clear that the Kryptonians are moving superfast, I never lost track of what they were doing.  This is due to the filmmakers rhythm for it: pause, consider what to do, DOITINSANELYFAST; pause, observe result, repeat.  Thanks to that masterful filmic choice I could follow the super speed battles better than I could the fights in the recent Batman trilogy.

Is it my imagination, or is Krypton clearly a metaphor for European colonialism?  It makes for an interesting commentary if it is.

"So, all we have to do is stick the key in Artifact A, throw it at Artifact B, and all the threats semi-magically disappear?" Ladies and gentlemen, COMIC BOOK SCIENCE.

The choice of having Pa Kent trust his son, but not necessary humanity seems counter-intuitive until you see the film.  But in context it makes so much more sense this way: Jor-El is the idealist; Jonathan is the realist.

Cavill does a marvelous job playing Superman with exactly the right quiet confidence.  Really, it was amazing.  I kept thinking, "Why, yes; that's just how Superman should seem."

Hey, is that.... Zod kneeling before the Son of Jor-El?  Nice touch.

Amy Adams is the oldest Lois Lane on film to date, and I think she did a good job. She's not my favorite Lois, but I thought she did well.

I haven't seen it yet, but may I thank you for that shirtless photo of Mister Cavill?

Yep, Metropolis did indeed have lots of buildings to spare. And on the one hand, I could've done with a bit less disaster porn. On the other hand, if aliens were invading/terraforming - if ruthless super-powered Kryptonians were ganging up on an inexperienced Superman - there would indeed be a lot of collateral damage and a lot of casualties. I would've liked to have seen Superman try to lead them away from Smallville and Metropolis - and then have it not work when they just continue to mow buildings down in order to bring him back. They'd already said they'd destroy the planet if he didn't surrender, so clearly they would've used the same tactic if he tried leading them away from people. But nonetheless, I wanted to at least see the attempt. For that matter, he could've tried physically dragging/throwing them out of populated areas too. Again, this wouldn't have been terribly effective, given that some would've escaped his grasp and/or stayed behind - but the attempt could've been made. Plus, I wanted to see Supes a) try to save more people and b) be more visibly distressed about the carnage. And I wanted to see at least a nod to repercussions/reactions re: this massive catastrophe at the end. So I give thumbs up to the collateral damage (we're well beyond the Kryptonians-fight-but-there-isn't-all-that-much-damage of Superman II), but thumbs down to some of its (pardon the pun) execution.

I was really impressed at how Supes and Zod kept finding areas to fight through that they hadn't already devastated.

I'm curious how the next movie will handle the aftermath. I mean, thousands of people had to have lost their lives, and the damage bill would be in the billions, I'd think. Even years later, there should be some signs of all that trauma.

Maybe all that damage to his property is what finally pushes Lex over the edge ;-)

Ooh, I'd like that I think. If Lexcorp is doing the rebuilding of Metropolis in the next movie, they could use the angle of "If that alien hadn't come here, the rest wouldn't have followed, and our city would still be intact!" to fuel Lex's hatred of Superman.

I've decided not to see it, so I've just got to ask: Kenny Braverman? Really? In what context?

At one point in his childhood, Clark is being bullied.

The name is never spoken, but if you check the credits, the bully's name is...

Braverman? Huh. Somehow I got the impression that Pete Ross was the bully. Clearly I need to see it again. But in any case the "loser" version of Pete is one thing I wish they hadn't carried over from Superman For All Seasons.

Dude. Amy Adams is 38 years old, and she's been nominated for 4 Academy Awards. How much more gravitas do you want? You make it sound like they cast Demi Lovato in the role.

Marcos, not the first bully (who was Pete), but afterwards at the tractor-y place; the one at the fence. THAT was Kenny.

John, it's not a question of her age, which does NOT convey gravitas automatically.

Adams didn't SEEM like Lois Lane at all to me; did she to you?

Of course age doesn't automatically convey gravitas, that's why I also mentioned her accolades. She's not just some pretty neophyte.
Margot Kidder is still the best.

JohnF, am interested in hearing more about this; send me a PM at scipiogarling@gmail.com

I've finally seen it, and it didn't really work for me. I'm not going to get worked up over it, but I'm glad you pointed out some of the better points, Scipio. I tend to focus on flaws -- it's a personal failing.

That was the first superhero fight of Superman's life, and Zod was a trained warrior. Superman was fighting not just to stop Zod's plan, but for his own LIFE.

And the only people who died at the end of MOS were the IDIOTS who stayed behind to record the fight on their iPhones. Everyone else had time to flee the area, because the World Engine had been pounding the hell out everything for a good while before the fight began.