I know I talk too much about Heroclix for those of my readers who don’t play, but, gosh darn it, some huge positive changes have been made to how the game is played that I just can’t keep quiet about!

Some powers that were a bit too powerful have gotten reined in.

Outwit/Perplex/Probability Control  are the “distance” supportive powers that let you affect other figures’ combat without being directly involved yourself.  Outwit cancels another figure’s power, Perplex can alter another figure’s combat values, and Probability Control can make a figure reroll a combat roll.  They are very powerful, particularly since they are ‘free’ (you can do them during your turn and still move or attack).  The range for using the power has always been untethered to the regular “shooting range” of the figure; it has always been 10 squares.  Since the average shooting range is about 6, this made them TOO powerful.  But now the range of these powers is limited by the figure’s shooting range (for a minimum of 6 on figures with shorter ranges).  Now all the many characters will O/P/PC can’t just hide away from danger, having a huge impact on the game without being anywhere near the action. 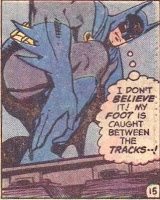 Leap/Climb (L/C) & Hypersonic Speed (HSS) are powers held by gymnasticky types (Bat-family characters often have leap/climb) and speedsters (the Flash family have Hypersonic Speed).  The powers do various things, but one thing they did was provide automatic “breakaway”.   ‘Breakaway’ is the rule that a character next to an opponent needs to make a die roll of 4/5/6 in order to move away; if they fail to breakaway, well, then they are stuck there and just wasted a turn.  Breakaway helps keep figures that can attack from a distance (by batarang, gun, or zappy powers) from overwhelming characters that have to punch you in the face in person.  But since there are a lot of characters with either L/C or HSS, breakaway’s relevance had faded and there just wasn’t any hope of pinning down a figure with either of those powers.  But NOW that’s been changed; rather than providing automatic breakaway, those powers just add +2 to the figure’s breakaway roll.  Sure it’s still likely that the character will escape (5 times out of 6), but it is now possible for such figures to fail to breakaway. In other words, occasionally, Blockbuster’s gonna grab Batman’s cape.

Some powers that had grown nearly useless have gotten boosted back into relevance. Plasticity represents abilities or powers of characters who are hard to get away from and conversely can elude you easily.  Characters like the elastic Elastic Man, Plastic Man, and Mr. Fantastic, particulate characters like Marvel’s Sandman and Hydroman, the ductile Metal Men, Element Man, and Element Woman, and shape-changing characters like the Martian Manhunter, Beast Boy, and Chameleon Boy.  Plasticity’s effect  has been improved (explained above) by removing ‘automatic breakaway’ from figures with L/C and HSS.  Those powers (and flight) also used to let figures zwoosh past an opponent without stopping (ordinarily a figure has to stop when entering a square adjacent to an opposing figure); but no more!  That still works but NOT on opposing figures with Plasticity, who are now like big sticky gumdrops of comic book violence.  This means Plasticity figs become a great way of controlling who can go where on the board, which is big strategic advantage.
Big Winners here: Beast Boy, Rag Doll, Bruce Wayne, Godiva, the Black flock of bats, Swamp Thing, GL Hal Jordan. 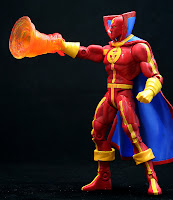 Force Blast is for characters who have a way to push you away without touching you.  Like Red Tornado, or Superman’s superbreath, or Blue Beetle’s BB gun.  Before, the opportunities to use it were kind of limited but NOW, a figure can use Force Blast (which pushes an opponent back a few squares) any time they successfully attack them.  This is great because you can use it to smack people into walls, off the edge of buildings, or into the arms of some big bruiser.
Big Winners here include: Blue Beetle, Red Tornado, Superman, Ocean Master, the NML Batgirl. 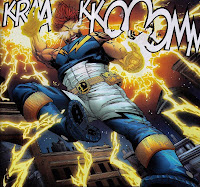 Energy Explosion is for bomb throwers and blasty types; it lets you hit one main target but also do some damage to any adjacent figures.  Used to be that you couldn’t use EE with other powers and when you did use it reduced damage to the main target to 1; very wussy.  But NOW the damage to the main target isn’t reduced PLUS you can use it with other powers (like Running Shot).
Big Winners here include: Fire, Starfire, Rocket Red, Black Lightning, Green Arrow, Live Wire, Wildfire, Lightning Lad, the Haunted Tank.

Some powers have been adjusted to have more flexible use. 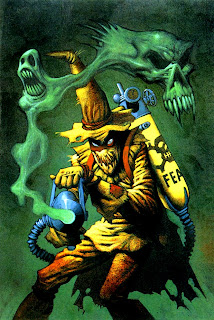 Incapacitate (a.k.a. ‘incap’). This for characters that can impede or halt other characters without necessarily doing them damage.  In the game this means adding an action token to an opposing figure (figs with one token get a penalty for acting and those with two cannot act at all).  But Incap was USELESS against any figure with two action tokens (because that’s the maximum).  Now, however, if you use Incap on an opponent with two tokens already, it takes a click of penetrating damage (that’s damage that can’t be reduced in any way).  This makes Incap figures hugely more useful.
Big Winners here include: Robin, Nightwing, Scarecrow, Black Canary, Mr. Freeze, Blue Beetle.
Smoke Cloud.  This is the ability to create areas the temporarily impede movement and visibility.  The number of spaces you can affect with it has gone from 4 to 6, and anyone in one of those spaces now gets -1 to his attack.  This makes Smoke Cloud a much more offensive power.
Big Winners include: the Batfamily, the Question, Sargon the Sorcerer, the Scarecrow. 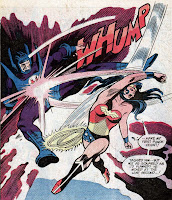 Close/Ranged Combat Expert.  This used to add +2 to the damage your figure could do to a particularly type of attack.  But now you can distribute that +2 over both your damage and attack values, making these powers MUCH more flexible.
Big Winners include: Wonder Woman, Green Lantern, the Batfamily, Aquaman, the Superman family.

There are some characters that benefit from several of these changes, making them over into nearly figures, game wise.  BIG WINNERS OVERALL INCLUDE: SCARECROW, BLUE BEETLE, BLACK LIGHTNING, GREEN ARROW.
And all this is to say NOTHING of the four new PINK powers (Sidestep, Precision Attack, Invincible, and Empower). It’s a great time to be a Heroclix player; consider it!
Posted by Scipio at 1:19 PM

Did you somehow KNOW that I just cancelled my standing order for bricks of Heroclix? Now you start talking about a bunch of cool new changes, making me want to get back into it.

I assume you'll be doing a post soon about these "pink powers"? Pretty please?

"Sidestep"= figure gets above of two squares as a free action.

"Precision strike"= attack cannot be evaded, shunted, or reduced to less than one damage

"Invincible" = figure ignores half the damage from any attack

Thanks for the post, Scipio. After a week living in a city that was bombed then went under lockdown while they organized a terrorist manhunt, it was nice to read an enthusiastic post about games and pastimes. What a pleasant diversion! Hope you enjoy the new Heroclix changes.

Long after those bad guys' names are forgotten, there will still be pink powers. :-)

The new powers all sound good to me. I don't like having to relearn the old powers, though!