The Shield: Who He Is, and How He Came to Be, II

When last we left our hero, THE SHIELD, his dad got blowed up real good in the Black Tom Explosion and he was being raised by J. Edgar Hoover. Yes, really. As crazy as foreign saboteurs blowing up munition ships off the Jersey shore sounds, it's even crazier because, well, it actually happened. Who said comics aren't educational?

Comic books have a long tradition of heroes being inspired by their parents' dying words.

So it was with the Shield, as Joe Higgins' father leaves him with the immortal words: 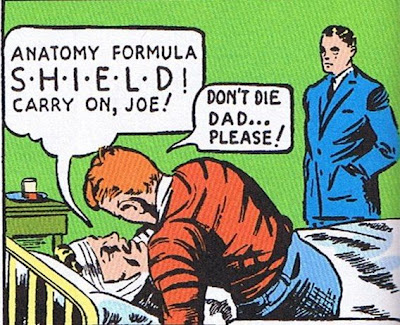 "Anatomy formula S*H*I*E*L*D! Carry on, Joe!"
Put that on your tombstone. Oh, and I really wish we would have gotten a thought balloon from J. Edgar here: "Now the boy is all MINE!"

Now, any normal person would simply conclude that the Black Tom Explosion had left shrapnel in Lt. Higgins' brain, causing death-bed dementia. But the Shield is no normal person! He, instead, proceeds to waste 12 to 15 years and three large panels becoming a presumptuous chemistry geek so he can "carry on".

Even after he gets his Ph.D. in chemistry, Joe is still laboring to complete his father's experiment.

Told ya so.
In his quest, Joe employs the most advance scientific equipment of his day, including: 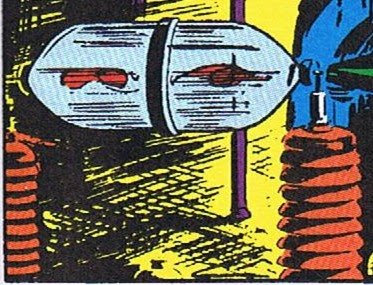 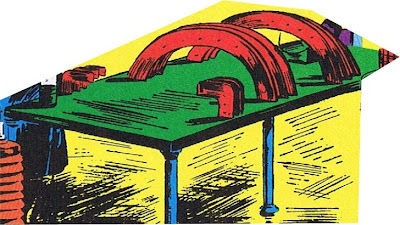 the Table of Pain & Pleasure 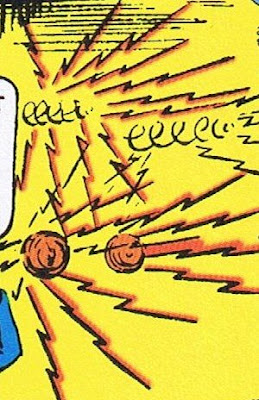 and the Device That Renders Boyfriends Unnecessary. 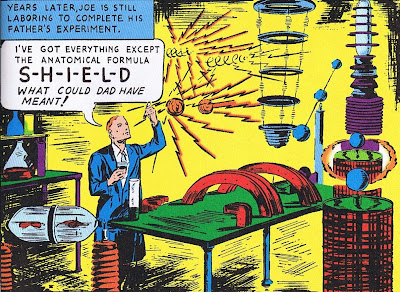 This hoo-hah proves useless, of course, because all great superhero origins are capped by an utterly random moment of self-realization, like a bat flying in a window. The Shield's moment comes as a hallucination induced by pipe-smoking the weed he grows on his coffee table. 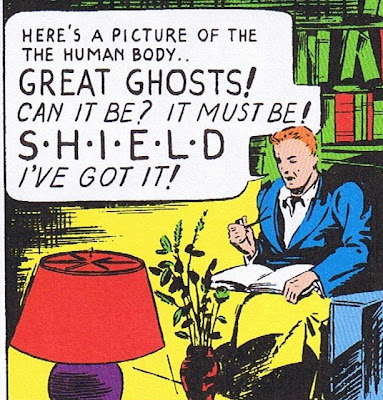 Inspired, Joe dons the latex sex gear he wears only to church on Sundays, grabs some topical poppers, and heads to the Table of Pain & Pleasure. 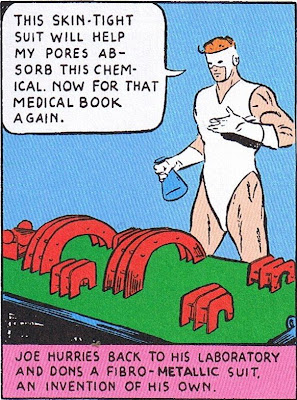 What could have caused this inspiration (I mean, other than all the chemicals Joe messes around with)? Can you imagine.. 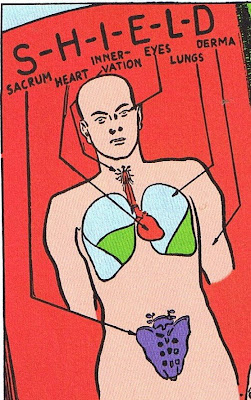 SWEET BABY JESUS ON A SWING-SET,
WHAT THE HECK IS THAT?!

I really don't have the intestinal fortitude -- or, rather, the "innervation" -- to examine the so-called Anatomy Formula SHIELD. 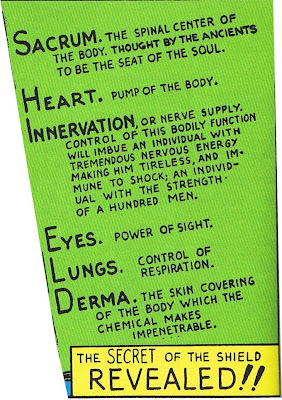 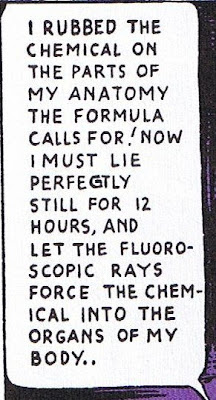 to rub his Dad's improved formula on those parts of his body and lie still under a strobe light for 12 hours, I am simply dying to know how he rubbed in on his HEART, his LUNGS, and most titillatingly, his SACRUM.

I'm betting that it somehow involved using the Device That Renders Boyfriends Unnecessary....

TO BE CONTINUED
Posted by Scipio at 9:05 PM

Thanks for killing me, mac. :D

But you're just SPOILING us with this awesome look at the early life of SHIELD so we'll be so underwhelmed by his actions in his upcoming modern age debut! :D

Verification word: hhjkc -- the sound I last made before I passed out laughing.

I love how disinterested Hoover looks while Higgins senior lays dying- "I hope this guy hurries up and croaks, Clyde Tolson's waiting for me at home!"

You know, that was a...HIGHLY detailed origin there. I can live with bats flying in a window, or a spider bite, but really, all this rubbing and the table of pleasure and pain is FAR more than I want to know.

On the other hand, consider me properly titillated for the next chapter. Most superheroes WISH their origin was this kinky.

Well, it's nice to know that at least ONE super-hero had FUN during his origin story!

if only we could all become superheroes by rubbing body oil on parts of our bodies...not saying I tried...just saying...oh never mind :(

About halfway through this post, I figured to make a lame joke about "flying static balls." By the time I got to the end, I couldn't. What's the point?

Just think -- the Shield covering himself in kerosene, setting himself on fire, and then leaping through the air singing happy ditties as he chased spies in autogyros -- wasn't even in the top ten of weird crap he did or experienced.

There's more to come? This stuff is hilarious!

And I guess no home chemistry lab is complete without a table where you can confine "test subjects" with metal restraints.

Gosh, I might've majored in science back in college if I knew it was so charmingly kinky.

I thought i'd get sick of reading gay innuendos into old comic books but you sir are a master... this was hilarious

Where I come from, "dermis" is a part of your skin -DERMA is a synonym for kishke.

Once again, truly hilarious! I look forward to each of your posts. Keep up the good work!

What comic has the Shield's origin? I'm pretty sure it's not in Pep Comics -- I've read most of those!

Those books in his study look like telephone directories.

Wonder if he orders his "arcane" lab equipment from The Green Pages?

Is he wearing yellow pants to match the rug or did the colorist just take the afternoon off? And has he related to Vinnie (The Eraser) Coletta?

DERMA is a synonym for kishke.

Which means what now?

"What comic has the Shield's origin? I'm pretty sure it's not in Pep Comics -- I've read most of those!"

I've read Pep #1, and it's his first appearance all right, but he isn't given a backstory there.