In yesterday's episode, Professor Angel and his deformed, blackmailed proteges had used a giant mirror to cause a horrific accident with a truck full of rubber tires, a valuable wartime commodity.  Into this mess roars Green Arrow in that lemon-fresh mobile-home he calls "the Arrowcar":

This single panel encapsulates everything wrong about Green Arrow (except, you know, the archery thing).  Roy is the sensible adult and Ollie the impetuous child.  Ollie's #white(millioniare)privilege in having a priority rating for his tires and his putting his own desires before the country's needs.  The absurdity of the behemoth Arrowmobile, which weighs so much it probably needs new tires every 10 miles.  Ollie, proving his malfeasance in this regard by driving the car needlessly fast to satisfy his whims, even though that the exact reason he needs new tires.  He's not even waiting for the tire convoy to reach its distribution point; he's driving out to meet it on the road.  I suspect Oliver Queen's middle name is Karen.

Note the exact timing of events in the next panel, folks.
I'm guessing from the context (and the lack of an AAEEEIIIIIGH!) that this is a second or so truck derailed by the mirror, not the first one. But ask yourself what would have happened WITHOUT the mirror there, as Ollie, who we know is driving too fast, careens around the corner in his canary Kampfpanzer.  Odds are the trucks would have driven off the cliff TO AVOID THE ARROWCAR.

Anyway, as always, Roy takes care of the issue, while Ollie gawks like a tourist

Despite being amateur, first-time criminals, Angel's stooges immediately and intuitive realize that 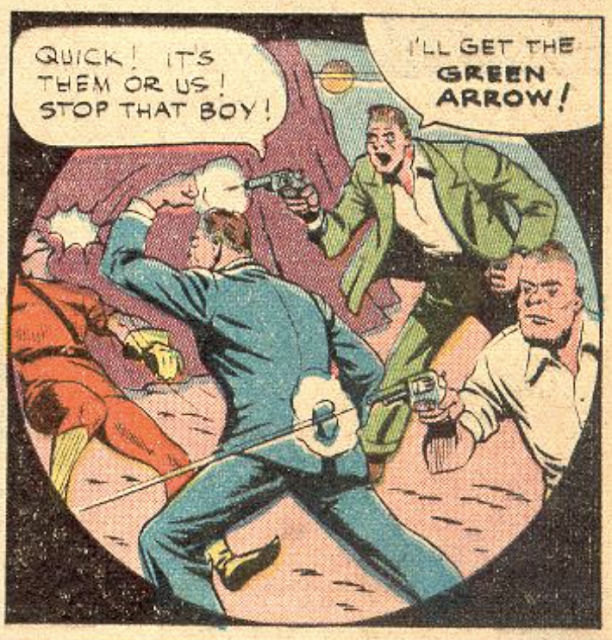 ...the real threat is the red-threaded kid and that only one of them is need to deal with Green Arrow.
They flee but leave behind a clue:

Boy, the crooks (and writers) sure do make it easy on Ollie, don't they?  At this stage, Batman (an actual detective) was doing stuff like tracking down criminals from scraps of material from the clothing.  But Green Arrow writers know they need to literally hand Oliver a piece of paper with the criminal's name on it if he's to stand any chance (N.B., Roy is the one who found the clue, 'natch).
The next encounter is, literally, a Bright idea:  to rob a benefit at a Stage Door Canteen in New York.
As it happens, pre-internet Oliver and Roy are ALSO headed to New York City to visit Equity Headquarters in hopes of finding Richard Bright...
Posted by Scipio at 7:09 PM

Too bad you don't hate Doctor Fate as much as you hate Green Arrow, IMHO Fate's story sounds much more interesting. Oh well.

This initially seems to beg the question of how far away Star City is from New York but, as it happens, this far back (November 1942), Green Arrow and Speedy's home city had in fact been established to be New York, so it's right there. Star City wasn't designated as such until the silver age.

If Wikipedia's entry on "Star City (comics)" is to be believed, that is.

I like Roy's passive-aggressive "what is it?" after spotting the card, picking it up, and delivering it to Ollie. Odds are that he copied down all the pertinent information for the likely scenario where Our Stalwart Hero chases Bright down so that he won't need to pay the replacement fee for his Equity card.

It'd be nice, though, to see the alternate-universe version of the story where Angel's Charlies don't exist and the caravan security mows down the hijacker playing chicken with them in the Banana Barge.

This fries my brain, even for Green Arrow.....

Which is to say just how much I adore Golden Age Green Arrow. Or: GAGA!

It IS Jonas. You learn something new every day!

And there we have our explanation for Dr. Angel's thugs. Crimefighters are a superstitious and cowardly lot. Angel will strike fear into them by turning his henchmen into that which Ollie most fears.

I really wish I'd thought that.