If I didn't know better, I'd say that DC's plan for Green Arrow is to screw him up/over so severely that we all simply take PITY on him and buy his book. Try to slog through this long excerpt from a recent Newsarama article about the current state of Green Arrow in DCU continuity.

As DC's "Rebirth" relaunch has reached its sixth month in December, several of the publisher's key titles are also reaching their twelfth issue. For Green Arrow, that means the twice-a-month title has had time to do more than just bring back Oliver Queen's goatee. Since the comic book kicked off with a new #1 in June, Ollie's been betrayed by many of the people he once trusted, lost his status and possessions, and was even marooned on an island yet again.
In our ongoing series marking the 12-issue point of most "Rebirth" titles, Newsarama takes a look at what has happened in Green Arrow and what may be coming next for the Emerald Archer.
The first issue of Green Arrow had a shocking final page revelation - not only was the CFO of Ollie's company part of a criminal organization, but assisting him were Oliver's half-sister Emiko and her mother, the master assassin Shado.
Oliver is drugged and dumped into the ocean, although Emi's betrayal is questionable, because she secretly plants a tracker on Ollie so his tech guru Henry can find him.
After a couple weeks healing, Ollie finds out that his name has been disgraced and everyone thinks he's dead. His former CFO, Cyrus Broderick, has taken over the company, and all of Ollie's possessions have been destroyed or liquidated.
Ollie vows to bring to justice the organization behind the attack - a group called the Ninth Circle that's headquartered in the "Inferno," their floating home base. He tries to infiltrate his own former office building to confront Cyrus, but Ollie ends up in a trap and has not only alerted the organization that he's alive, but Shado is on his trail.
Separately, Ollie's old ally John Diggle and Black Canary are investigating the Ninth Circle on their own. Canary makes her way into the Inferno, but is discovered, while Diggle finds out that the Ninth Circle is a bank that secretly funds crime around the world. He teams up with Green Arrow (after an awkward - and even angry - reunion) to try to free Dinah and take down the Inferno.
It becomes obvious to readers that Emiko's heart just isn't in this "betray all my friends" stuff, because she helps Dinah get free from the Circle. By the end of the Inferno battle, the floating base has exploded and Dinah, Ollie, and Diggle have all escaped onto what appears to be a deserted isle.
Over the course of all these adventures, readers find out that Emi and Shado haven't exactly been freely attacking Ollie and friends as part of the Ninth Circle. Emi is actually acting as a sort of double agent, trying to bring down the Ninth Circle and free Shado from a nasty Yakuza boss named Oyabun, to whom their family owes a blood-debt.
After some cool flashbacks to a story featuring the Clock King - a seemingly new version of the character for "Rebirth" - Emi fights Oyabun for her mother's freedom. Although Oyabun ends up turning into a dragon - no, really - Emiko wins with help from Shado as they blow Oyabun's lair up.
Meanwhile, back on the island (no, this isn't the same island from Ollie's origin, but it's pretty freaky on its own), Diggle, Dinah, and Ollie have to deal with a couple people who've been negatively affected by the Ninth Circle. Ollie realizes that Queen Industries (and its money) played a huge part in setting up the Ninth Circle's network. He's none too happy 'cause the "Rebirth" version of Oliver Queen is a social justice warrior.
Eventually, the three escape on a high speed transatlantic train (called The Empire Empress) that Ollie's father designed. The train carries some nasty chemicals, as well as some political figures, including the aforementioned Cyrus Broderick.
Even though he and his friends are stowaways, Ollie just can't stay hidden. After a villain tries to poison the dignitaries, Oliver and company become embroiled in a battle that concludes with a bomb.
Everyone important escapes the madness alive, but Green Arrow and friends are being blamed by the news media for all the trouble. News reporters in Seattle have acquired security footage from Queen Industries that confirms that Green Arrow broke in there a while back, and the superhero is being connected with the wreck of The Empire Empress, as well as the death of one of the diplomats on board.
With Green Arrow #12, the team of Dinah, Diggle, and Ollie have set up a tree house base of operations outside Seattle and Oliver gets back into the business of saving people's lives. The issue sets up the next storyline, titled "Emerald Outlaw," which involves a politician named Nathan Domini and another nefarious plot by Cyrus Broderick to get rid of Green Arrow.
According to DC's Direct Currents magazine, the next story arc will have Ollie framed as a murderer, and Domini will use the grisly deaths as a campaign issue in his bid for the mayor's office. "As Green Arrow looks further into the murders, he soon realizes that it must be someone he knows," the issue promises.

The nicest thing I can say about all this would be: at least Ollie's not a werewolf.  "Everyone important escapes the madness alive," this synopsis says; apparently I'm not important.  The only way I have of escaping this madness is by not reading it. 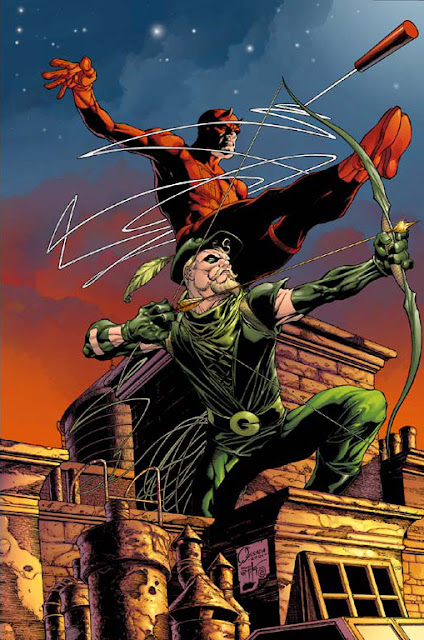 This seems to be the default approach to Ollie for some time now, and it's, frankly, quite tedious.  Even I, who have negative respect for Green Arrow, acknowledge that THAT'S HIS ORIGIN STORY.  The man was SHIPWRECKED for Neptune's sake.  Continuing to 'shipwreck' him proves nothing, other than that you can't think of anything else to do with the character.

Who's writing Green Arrow now? Is it still the same guy who thought making him a werewolf was a good idea?  Get your act together, DC Comics;  if DC Entertainment can give me a version of the Arrowverse I'm interested in, why can't you?  I hate Green Arrow and even I could do a better job than this.

This illustrates a common problem DC seems to have with varying depictions of its heroes. For some reason, they never attempt to duplicate the mass-media success of any particular hero. Often, the comics seem to take a perverse delight in going off in some bizarre tangent that just isn't designed to take advantage of the mass media depiction.

I think the divergence started with Batman '66 and the rush to divorce the comics from the BAM! POW! popular mindset.

Marvel, however, has typically tried to bring its comics into line with media successes.

Yeah, the current writer (Benjamin Percy) is the guy who turned Green Arrow into a werewolf. He did this to inform us that racism is bad, and also that to be a minority is pretty much the same as being a violent monster whose minority-ness is contagious.

Maybe the TV show is inadvertently part of the problem with the comic: having a TV show means that people expect big action with powerful players and the like. That's not Green Arrow's strong suit. I don't think I enjoyed Ollie as much as when he got eight pages in "World's Finest" comics like 35 years ago; they were smaller-scale stories that gave me all the stuff I liked -- going after "corporate fat-cats" or whatever -- without getting bogged down in Soap operatics.

"I hate Green Arrow and even I could do a better job than this."

What WOULD you do? Suppose Dan Didio gave you free rein over Green Arrow, your word is law, you can even turn him into any were-creature you want. What would you do to reclaim and redeem him? If it meant retiring Ollie altogether, what would you replace him with?

Poor Ollie. I know that the Hero has to battle injustice and stuff... but this is just ridiculous! I prefer my Ollie calling Hal Jordan a Nazi for voting Republican, shooting cat-arrows and ogling Black Canary... but then I can be a fuddy duddy.

You'd think in the current hyper-politicized environment DC would be eager to use their ready-made Trump-bashing vehicle. If anyone should be freaking out at a Republican fat-cat winning high office, it's Green Arrow.

"What WOULD you do?"

I'd probably start with this:

It's pretty dumb. But it's about 100 times better than Rebirth Green Arrow #1, which I read when it came out to give Green Arrow a chance.

Should I be concerned about the line coming out of Daredevil's cane? I'm pretty sure Daredevil was was all "hey, I wonder if twirling really works as well as it does in Martian Manhunter comics?" before he decided to throw the damn thing.

As an actual fan of Green Arrow (I know, I know, I don't fully understand it either), I like the current Green Arrow comic. The Rebirth special didn't do anything for me, but the ongoing has been solid. Not amazing, but good enough. The most recent issue, 13, was stupid so I might drop it soon. But! The plotting, pacing, action, and art have all been to my liking. The dialogue, not so much, but I used to watch Smallville so it's not a deal breaker...

Why does Green Arrow work for me when his life is always falling apart? Because he's a screw up. My platonic ideal of Oliver Queen is someone who goes in overconfident and without much of a plan, gets in way over his head, and finds a way regardless. Leave the planning to Batman, the finesse to Nightwing, the research to Batgirl, the skill to Black Canary, and the drive to Huntress. Olli's all about chutzpah and pointy sticks that sometimes end in boxing gloves and dead cats.

By the way, have you seen the Super Powers back-ups in Cave Carson has a Cybernetic Eye? Issue 3 has the best Green Arrow origin ever.

It's a Van Dyke not a goatee.