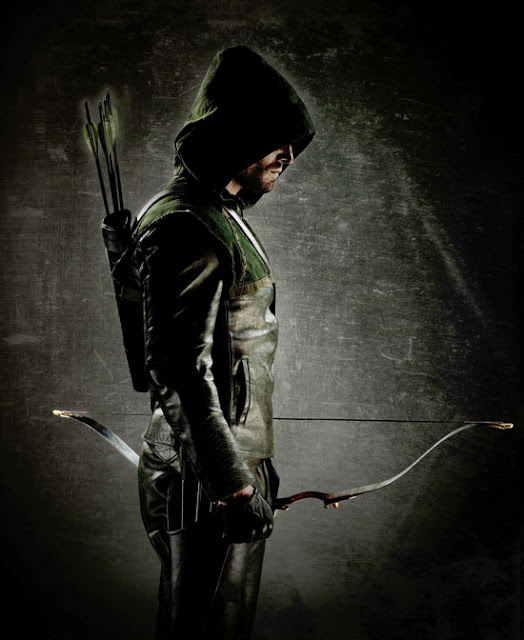 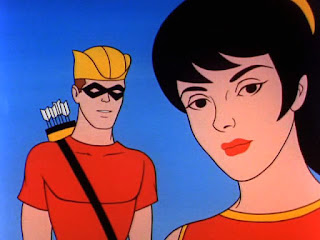 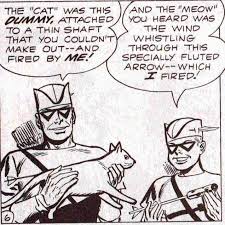 If The Plastic Cat Arrow doesn't appear in the teevee show, humanity will have failed us.

Not technically a Super Friend, though he did make a guest appearance in a Season 1 episode. But I agree with the basic idea, that he really lucked out here.

"Plastic Cat Arrow! YOU HAVE FAILED THIS CITY!"

" though he did make a guest appearance in a Season 1 episode. " DID he, now? I really can't remember it..!

It was just a small cameo.

Strangely enough, as much as I love the comics' Green Arrow (yeah I'm one of THEM), I can't get into the show. The first season was a deal-breaker for me, where Ollie had to wrestle with being a killer. That's something superheroes SHOULDN'T wrestle with in general; the fact that they don't kill (except under unusual circumstances) is one of the things that keeps them from being terrifying. Get that wrong and you lose me.

(And yeah, I know Ollie was a killer during the Mike Grell run. I gave up about two issues into the Grell run on exactly those grounds. I stuck through the Nocenti run and even the Percy werewolf Green Arrow run, but not the Grell serial killer run.)

That said, I did watch "Green Arrow" last night because crossover. Is it always that thick with soap opera? More Supergirl, less everybody else please.

"The first season was a deal-breaker for me, "

Fact is, I didn't see the first and second season. I only started watching when it began to cross over with Flash.

And, yes, it is always that thick with soap opera.

Was he the gigantic goof?

The thing about Arrow, as distinct from a Green Arrow comic, I think, is that it's very much an ensemble story.

Sure, Ollie gets a lot of attention and gets a "solo back-up story" in most episodes, but the compelling story (even when he was killing people) has been about the entire cast, and their shared history of...failing the city. The Queens were pretty awful people, Merlyn (and later Ray Palmer) regretted not saving his wife (and fiancée), Diggle had his shady history in Afghanistan, Felicity was trying to climb out from under her mother's image, Detective Lance had his assorted problems. Basically, everyone except Laurel (who didn't really have any chemistry with anyone) was trying to overcome their pasts together, and that makes for pretty compelling storytelling even when the lead is Green Arrow.

The comics, by contrast, focus on Ollie as an action hero, sometimes with sidekicks and helpers, but they only exist to make Ollie look more important. Even when it's Black Canary, who could be an independent heroine, she's just been stranded as "Ollie's girlfriend" for decades. It's a look that isn't terrible on the likes of Superman or Batman, but even in comics, a well-crafted ensemble gives the hero (even Green Arrow!) room to actually be more three-dimensional.

And it only took The CW to figure that out, without a single plastic cat arrow needing to be fired...

Judd Winick's run was chock-full of Green Arrow ensembleness. Team Arrow back in the day consisted of Ollie, Dinah, Roy, Connor, and Mia. That's two Green Arrows, two Speedies, and Black Canary. It worked. And one thing it did very well was cast Ollie as an imperfect "patriarch" who needs a good talking-to on occasion but overall is trying to do right, and succeeds more often than not.

Would very much like there to be another Superboy Punch that reinstates Team Arrow to its previous form and puts Winick back on writing duties.

"The success of Arrow lies not with Green Arrow, but with the showrunners, who with cleverness, artistry, and love for comics created an Ollie Queen (and a cast and world around him) that interests and entertains viewers."

You forgot abs, Scipio. It's a CW show. Abs.

The cat arrow was pretty fabulous, but I still like the pearl vacuuming arrow the best.

No, just a "staunch member of the Justice League".

I figured out the real reason you hate Green Arrow, y'know.

Because during the Crisis on Infinite Earths, he took Vibe down with one punch.

Didn't even need to draw his bow.

I'm afraid I would vote for the tandem use of cat-arrow and custom meow-whistle-arrow over good sense and good plots every time. You could do a really fine 60s-TV-Batman version of Green Arrow. Not exactly the same, but with equal appreciation of beautiful stupidity.

The boxing glove arrow is cool, no matter what anyone says. BONK! Fight's over, with no fatalities.

I think it was Tom the Dancing Bug that put it best:

I am 'Fantastically Skilled At Archery Man!' oh no, it's my arch nemesis, 'Somewhat OK at Machine Guns Man!"

Watching Green Arrow in tandem with the other shows is great, because the contrast is great:
- Arrow is where things are (mostly) realistic and down to ground, focused on character drama. Things are grounded and dark.
- The Flash is about Non-normal people turned into the Impossible deal with the impossible. All the drama comes from juxtaposing normal human situations with super-hero weirdness - time-travel, alternate universes, super-villains, meta-powers, time paradoxes, etc.
- Supergirl is bright, wide-eyed and optimistic. The immigrant success story of a young woman from another planet, and how she makes this one better by being there.
- Legends of Tomorrow is pretty much a live-action cartoon - a ensemble cast travels through history and deal with morality questions, deadly enemies, themes of fate, destiny, choice and contrast with different epochs of human history. Like its cast, the tone is a mix of Arrow and Flash's, but with the wackyness up to 11.

I wonder if one could fit the shows into the comics ages.

I agree with John that a big part of the story is how everyone was failing the city. Its not just about Green Arrow - its about the Queens, the Lances, the Merlyns, the Diggles, all the people of that city. And Oliver, guided by his father, is the one who decided to do something about it.

I think (Green) Arrow works because he is a Batman clone (which everyone knows) - things can be done with him that could't be done with Batman.

- Batman killing dudes left and right? Unless you're back on the 1940s, its a big no.
- Batman's parents (well, his mom) being alive? Fine elseworld.
- Batman's sidekick is a drug addict? No way! Batman taught them better than that (well, except Jason Todd)
- Bruce Wayne has a sibling? Only in E-3, buddy.
- Bruce Wayne... if Bruce Wayne was a real playboy.

Arrow was actually darker than Batman, at least early on. In fact, Oliver still is. But I think the plan here is to end up with a Green Arrow that is brighter and more of a cheery dude than Batman.

I love the character work done to make Oliver such a compelling character. Stephen Amell is really a fantastic actor.

I hope they bring all the cast from the show into the comics. Perhaps even FeFe the Unmentionable (not sure if she works in comics as a character - maybe what we need here is comics Felicity Smoak (who was fine - you remember her, don't you?). We already got Diggle.