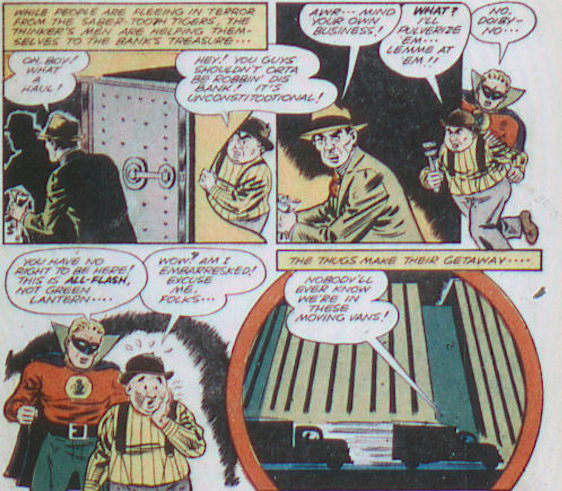 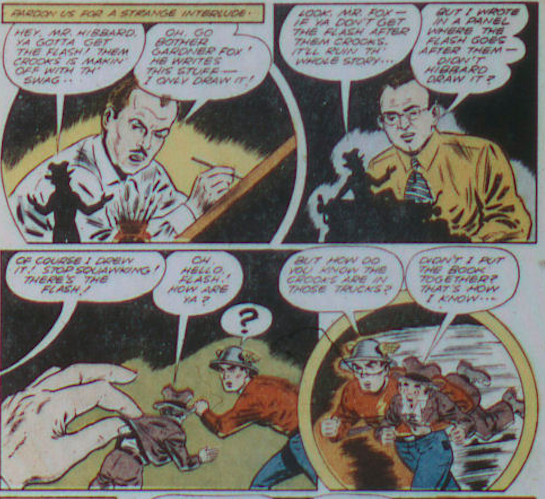 Email ThisBlogThis!Share to TwitterShare to FacebookShare to Pinterest
Labels: transquartomuralism

Doiby Dickles is the best. As he once introduced himself: "Da name's Doiby Dickles! Dat's wit one 'S'."

Grant Morrison will now draft a ten-year mega-crossover event involving every character every published detailing the trans-dimensional, reality-shifting powers of Doiby Dickles and...uhm...the other guy in the other hat (an editor?), which will be entirely his idea and not just a painfully-extended rehash of these panels.

More seriously, All-American books were surprisingly flexible with their definition of reality. Don't forget that they were the actual publishers of All-Star Comics, where the JSA originally were very open about with readers about the anthology-only membership requirements. I seem to remember one of the anthologies also having stories where crossovers were explained by the characters heading over to the other character's story to get help. Pretty good stuff all around.

"The guy in the other hat" is Noddy Toylan, the nominal leader of 'the Dimwits', a painfully obvious rip-off of the Three Stooges which infested Jay's Golden Age adventures in the days when a comic relief sidekicks seemed de rigeur.

Pfft. Uncle Marvel is still my favorite sidekick. Who doesn't want a boozy old geezer tagging along on their adventures?

Nicely, though, we DID get to see the Three Dimwits massacred horribly in 2009's "Cry for Justice". Grim and gritty ain't all bad, I guess.

Well, except during his flashback (well, mostly flashback) appearance in Ostrander's Spectre run. He was rather endearing there.

Ah, right. The Dimwits. The reference to "putting the book together" made me think it was deeper than just a sidekick. Thanks.

And yeah, the sidekick types were generally pretty atrocious and, at lesser companies, often outright offensive. I wonder if the intent was having "something for everyone" in the stories (especially the celebrity knockoffs), some model they thought they needed to adhere to, or just actually thought those characters were brilliant additions to the cast.