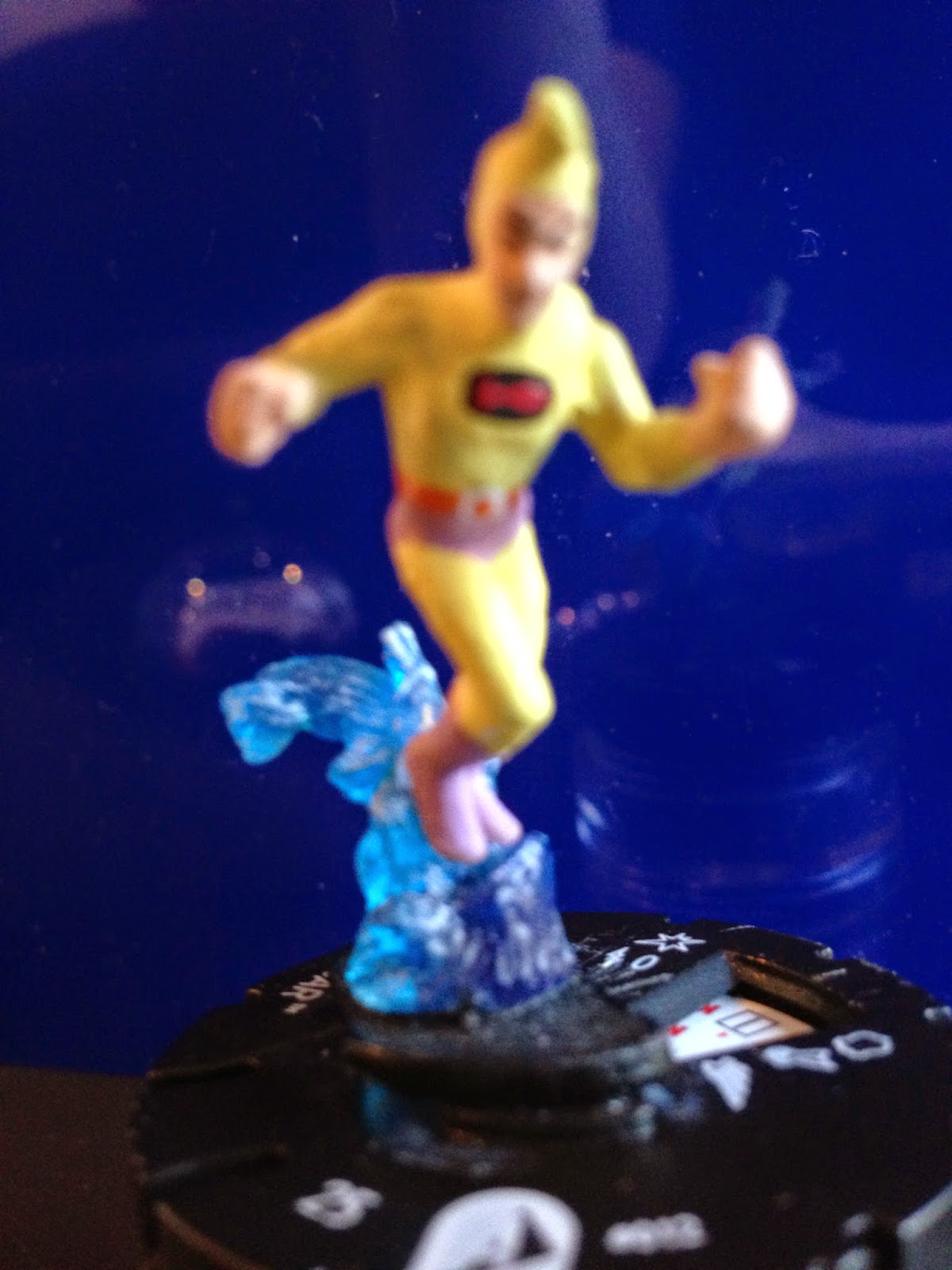 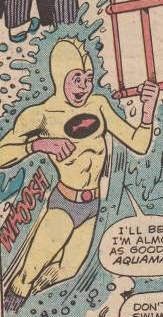 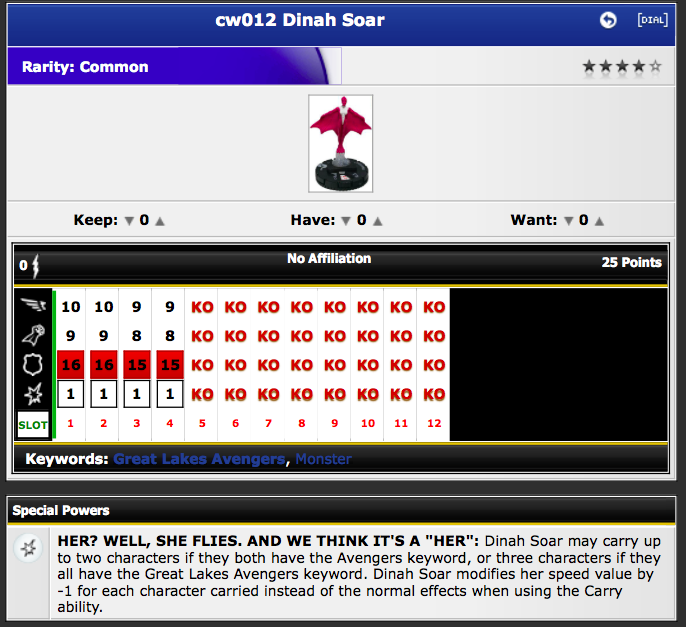 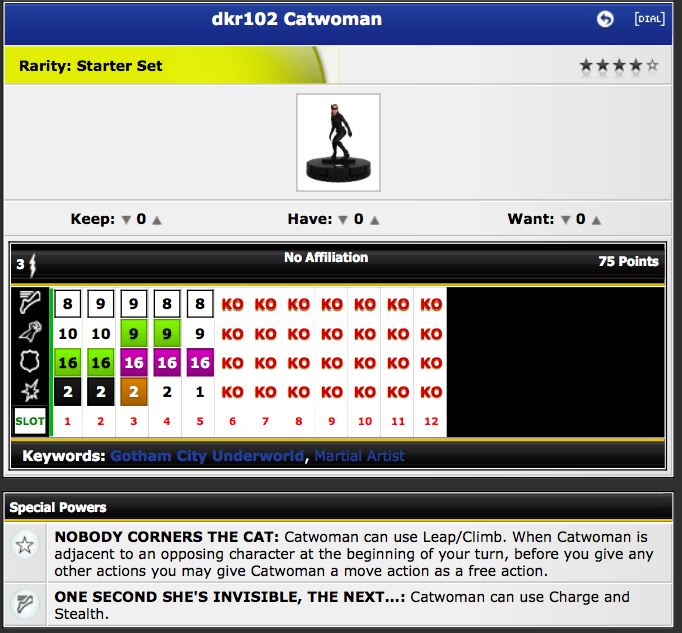 Are there more effective ways to spend 100 points on a Heroclix team build? BWHAHAHA, of course.  But more FUN? I don't think so.  Besides, if there is even the remotest chance that, at some point, Sardine will be able to kayo that big-headed purple-eyed freak, Aqualad, it's worth it.
Posted by Scipio at 9:50 PM 8 comments: 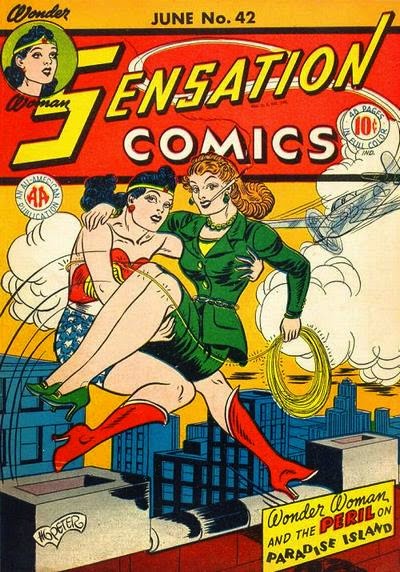 Time for it to Stop

This weekend I watched some of DC Entertainment’s animated films.

I watched Justice League: Doom. It’s about replacing Aquaman, whom we pretend doesn’t exist, in the plot with Cyborg. That’s even though Aquaman is one of the four original “Super-Friends” whom the original “Legion of Doom” was gathered to fight.

I watched Justice League: War.  It’s about using Cyborg in the Justice League’s modern origin story to replace Aquaman, who again is completely shut out (although his pissy half-brother, Orm. shows up in the credit sequence).  This is major shift from the actual printed story, where Cyborg is used to replace the Martian Manhunter.

At least I can look forward to the Superman vs. Batman movie, where there is no original comic story to ignore. So it will skip right to ignoring Aquaman totally, and including Cyborg, instead.

Look, I have nothing against Cyborg as a person or as character—
Okay, wait, that’s a lie.

I’ve always thought Cyborg was a crappy character.  Great guy, but a crappy character.  Let’s start with the laughably ‘heroic’ name: VICTOR STONE.  Good heroes have names that undercut them, names that are boring or even wussy (“Bruce Wayne”; “Clark Kent”; “Peter Parker”; “Barry Allen”; “James Bond”, “Arthur Curry”, “Scipio Garling”,  et al.); it makes the superheroic identity seem like a contrast.  VIC STONE Is a movie star name (a PORN star name, really).  I can’t wait until he has a son someday and names him “Turok 2.0”.  Naming him “VICTOR STONE” cries out “this character is a HERO”, which is typical of the lazy, cheesy writing of his creator Marv Wolfman, the Man Who Could Do No Write.

Then there’s his origin.  The iconic JL-level heroes have myths of self-creation (“I shall become a bat!”), happy accidents (“CRAAAAAAACK!”), or bequeathed legacy (“Speak my name”, “Doomed planet”, and “Oh, god, really, the ring choose YOU, WTF?!?! “).  Vic Stone’s origin is a “Doom Patrol” style origin: a BMOC (race car driver/movie starlet/jet pilot/football player) has a tragic injury that both marginalizes them from the norm and gives them special powers.  Why, it’s rather Marvelesque, isn’t it?  Like the origins of Daredevil or the Thing or the Hulk?  Almost as if Cyborg’s creator were writing for Marvel.

At least Geoff Johns did a good job making Cyborg’s New 52 origin more epic (Red Room surgery with T.O. Morrow using alien high-tech to repair damage caused by Darkseid’s invasion!).  Cyborg’s pre-52 origin was that an experiment his parents should have been tending blew up at him because his parents were making out on a control panel; that’s Wolfman-style heroism.

And, of course, there’s the generic-ness of his powers/name.  Let’s slap some tech on him, that’ll let him do whatever we need.  He’ll be a cyborg. Named…. Cyborg.  Eventually he can hang out with Dark Vigilante, Strong Guy, Warrior Woman, Magic Lamp, Speedster, and Sea King.  Except when we just use him instead of Sea King.    It’s like he’s the result of an office bet at DC Comics: “I’ll bet you one dollar you can’t come up with a new superhero before the elevator ride’s over!”

I guess it wasn't as egregious in his original setting in the Teen Titans, where Cyborg was introduced with Dark Mage Girl, Alien Metal Bra, and, um, Beast Boy.  He was always fairly colorless in the Teen Titans. No connection to any of the DC heroic dynasties or iconic characters, no independent stories or setting of his own, no special role on the team.   We all agree he was vivacious and charming, thanks to Khary Payton and fun writing, on the Teen Titans cartoon, but that’s hardly a reason to use him while benching Aquaman.

I get that DC doesn't want its iconic heroes to be a ‘whites-only club’, and it’s laudable. And they've only got so much to work with.  Lord knows, all their attempts to level-up Vixen have consistently failed miserably, because, well… Vixen’s a much worse character than Cyborg, even.  You can put a pig in a dress, but you can’t teach it to dance.

But… Cyborg as a Justice League founder?!  Rather than Black Lightning, who’s got a much better publishing pedigree and Justice League connections?  Or Mister Terrific?  Or Vibe, who also got his powers from Darkseid’s invasion and is, after all, the world’s greatest break-dancing superhero, whether they show him doing it or not?

Anyway, I didn't intend for this post to become a diatribe against Cyborg as a character.  Or even against his choice as DC’s affirmative action choice in the Justice League.  It’s about EXCLUDING Aquaman from other-media projects.  About replacing him with Shazam in things (do NOT get me started).  About not treating him as one of its icons at the same time DC’s leadership trumpets its goal of refreshing his status as an icon.  Perhaps this is a split between DC Comics and DC Entertainment, I don’t know.