Before there was Young Justice, and Batman: Brave and the Bold, and Teen Titans, Batman and Superman the Animated Series, and The Batman, and Justice League (limited and unlimited)—even before the frickin’ SuperFriends—there was… Filmation.

Which doesn’t get enough love, in my estimation. When Filmation got the gig to make cartoons (that’s what people used to call “animated series”) of Batman, Superman, and Aquaman, Filmation was four years old, had about 12 bucks per episode to work with, didn’t hire warehouses of artists in some foreign company working for pennies, had a mannequin for a receptionist, and used about five voice actors, including Master of a Thousand Shrieking Alien Despot Voices, Ted Knight.

In fact, they had to bluff Elliot S! Maggin with some shenanigans to get the job. Of course, "bluffing Elliot S! Maggin" is pretty much in the same box as surprising your infant by magically 'reappearing' when you play peekaboo. They probably just told him that villainous cats banished by Krypto into the Phantom Zone were whispering story ideas into their ears at night and he was sold. 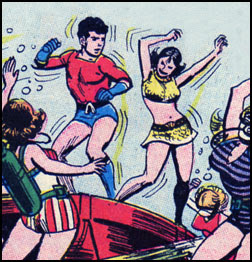 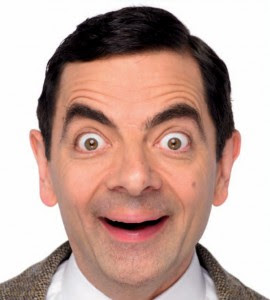 What they lacked in ability and resources, they made up for with ingenuity (like making up the story about the Phantom Zone cats). For example, Filmation’s animation was certainly not sophisticated, but (as previously mentioned), they understood how to make Aquaman cool. Heck, they never let Aqualad leave his side, and even Mr Bean looks cool in comparison when standing with Aqualad.

But in addition to their work on Batman, Superman, and Aquaman, they did a smaller number of “Side B” cartoons of other DC heroes, including the Teen Titans, the Atom, Hawkman, the Flash, the Justice League, and one of the Absorbascon’s favorite whipping boys, Green Lantern (Hal Jordan).

Let’s watch one of the GL Filmation cartoons together, shall we? You can currently watch the whole thing here, but I’m going to use screen caps below anyway.

“BY THE POWER OF THE MYSTIC GUARDIANS OF THE UNIVERSE….”

Filmation often had little oopsies in their coloring department for a few frames, but this next frame isn’t one of them. For some reason, they decided not to make the Guardians blue. It kind of robs them of their Alien Dignity. When not colored blue, the Guardians just look like some old guy who gives the counterman at the corner deli a hard time. 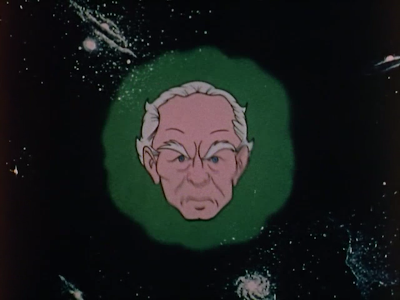 “You call this fresh?”

The visuals may not be helping the Guardians’ credibility, but the audio does; nobody but nobody in animation could generate awesome majesty and sincerity with his voice alone than Ted Knight (whom most remember only as “Ted Baxter”, the pompous and moronic newscaster on the Mary Tyler Moore Show). Ted Knight was an orator; he didn’t just say his lines, he practically SANG them. If Ted Knight says Mr Scheinmann up there is one of the “Miss Tick GAHHR dee ahns uvthuh YOO nee verse”, then you will damn well believe it and bow down accordingly.

Why, the voice of Ted Knight even makes you take Hal Jordan seriously.

At least, until Hal starts talking. More on that later. 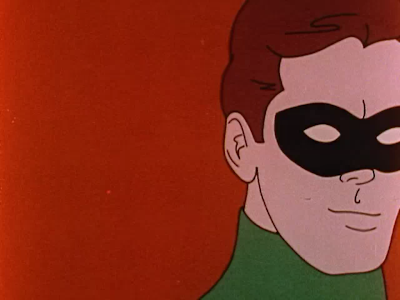 So the Mystic Guardians of the Universe live on... 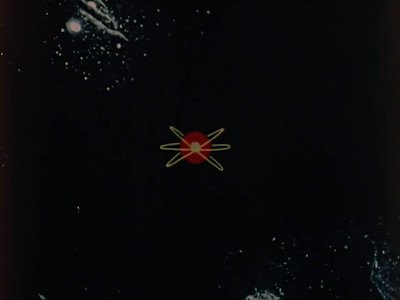 ...a giant glowball. Jeez, Jor-El would have a conniption.

Actually, they live on Oa, with its awesome but impractical architecture. 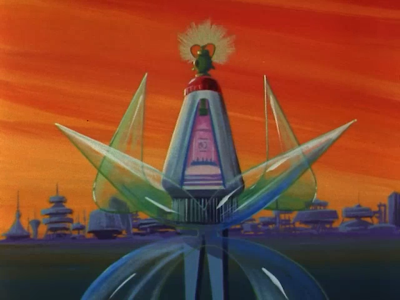 Little known fact: on February 4, 1989, the day after all the Filmation animators were fired by L’Oreal, they were all hired by an architecture firm in Dubai.

The story starts with Hal Jordan sitting on his phat ass at home, long-distance coaching some sucker who’s taking some experimental flight into space, sidekicked for no apparent reason by “Kairo”, Green Lantern’s Venusian Man Friday. 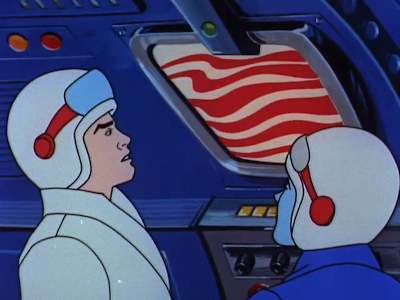 I’ve never heard an explanation why Filmation decided to recast/replace Tom “Pie-Face” Kalmaku, Hal’s Eskimo mechanic, with some blue kid from Venus named after an Egyptian cafe. Probably because Green Lantern needed a “space-oriented” sidekick and an Aleutian simply wasn’t exotic enough. Or perhaps it’s the Conservation of Blue theory; if the Guardians weren’t going to blue, somebody in the cast had to be.

"Hear me, MetroCity! You WILL bow down to Megamind!!!"

Regardless, the use of Kairo accomplished one important thing: it let Ted Knight use a Venusian accent, which … well, you’ll just have to hear it for yourself. It’s kind of what you’d get if Squiggy from Laverne & Shirley had a son with Pebbles Flintstone and raised him in the Philippines.

This is also the point where Hal Jordan starts talking, losing all the credibility that announcer Ted “Voice of Awesome” Knight had build up for him. Hal sounds exactly like the drunk at the bar in every other episode of Bewitched. “I wan’ choo to shteer offfff, Thom, yer too closhe t’ the Shargasho pl*hic*planneetoid.”

Guardians bless brilliant B-movie actor Gerald Mohr, the "King of Cool", for his work as the voice of Green Lantern. Hal Jordan’s voice falls about halfway between Dean Martin and Foster Brooks, and it is priceless. Once you hearit, suddenly the whole “Hal gets arrested for DWI” thing falls into place for you. All the while you thought Hal was just an idiot. Now you know better; he’s a drunken idiot. No wonder he’s benched at home driving flight simulators while somebody goes out to drive the spacecraft. 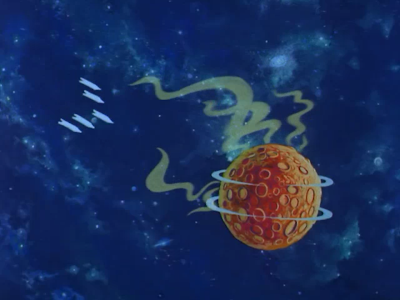 Naturally, coached by Hal, they shteer—sorry—steer the spacecraft right toward the evil and odiferous Sargasso Planetoid, whose stinkyon emanations overwhelm them. 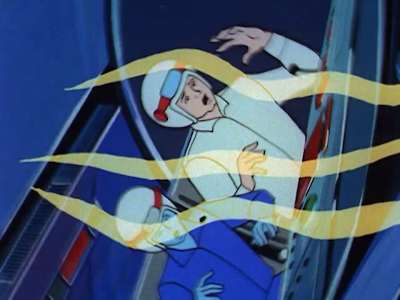 So Hal Jordan does what any sensible, subtle hero would do: steps outside in the middle of the airfield where he works and changes into Green Lantern in public. 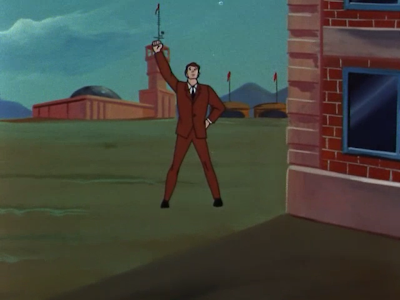 NEXT UP: We meet our villain!

In the Silver Age, when the Justice League was created, creators and artists were not focused on extraneous details. If it wasn't necessary to the plot, it didn't get in (and that included characterization).

In its first stories, the Justice League simply... existed. There was no long, drawn out story of Who It Was and How It Came To Be. Later, someone threw together a typically wacky tale of how the League was informed, involving the absurd Ersatzians, er, I mean Appellaxians and their attempt to take over Earth as a side-effect of their electoral process.

So, too, the JLA's HQ was introduced without ceremony or elaboration. They had a "secret sanctuary". It was deep within a hollowed out mountain.

Later on we learned that the Secret Sanctuary was, for no fathomable reason at all, in Rhode Island, by the ocean. Are there mountains sitting by the sea in Rhode Island? I don't think so. That's probably why the writers picked Rhode Island; chances are, most of their reader had never been there and hadn't the slightest idea what it was like.

The JLA holed up in the Secret Sanctuary for the entire Silver Age. Their tenure there--and indeed the Silver Age itself--came to an end when Snapper Carr betrayed the Justice League to the Joker, and the JLA modern to a very non-secret sanctuary "in geosynchronous orbit 22,300 miles above the earth" (as we were reminded in every story).

In later years, the Sanctuary would be used by Justice League successors, like the Detroit League, Young Justice and (briefly) the Justice Society. Those stays gave us several artistic interpretations of the Sanctuary, made possible by the fact that, as originally presented the Sanctuary was a tiny and unprepossessing place. 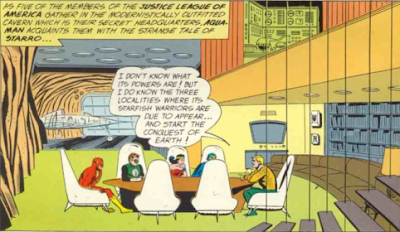 See those two empty chairs? Batman and Superman's.
They seldom hung out with the JLA during the Silver Age.
Too busy walking their dogs in capes, I suppose.

That was it. An open-face garage for Diana's plane, a meeting table in a cramped lounge, and some funky stairs up to a library and communication center. That was it; the HQ for the world's most astonishing and powerful superteam was little more than a carriage house.

Even later, when it started to be implied that the Sanctuary might be larger, we had no idea what that meant. For the longest time, so much of whatever non-action scenes the plot required in JLA stories took place while they all sat around that damned table trying to figure out what the heck Snapper was saying, so there were few visual clues as to anything else in the Sanctuary.

Eventually, various inconsistent cutaway plans were drafted (see link above). But I only used what I saw in the stories themselves when I made... 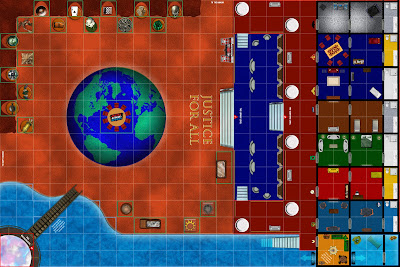 A custom Heroclix map of the Justice League of America's original headquarters!

I started with a few ideas. "The Conference Table" had to be in the middle of a big, cavernous space. Each of the original Leaguers should have their own quarters in the Sanctuary (even though they were never seen in the stories, it simply made sense as a practical matter), plus a guest room. There had to be a "library level". There had to be a waterway to Aquaman's room, and there had to be exits to the hangar and to the harbor.

I threw in some trophies as hindering terrain (since in JLA: Year One, the League was shown to keep trophies in their main hall rather than in a separate Trophy Room). I added a Teleportation Pad, since that figures so prominently in the Young Justice cartoon, and few suitable items of ostentation like the world rug and the "justice for all" inscription.

The map is fairly straightforward with the exception of Aquaman's uniquely amphibian living quarters, whose "dry room" has a hatch that leads to a pipeway that connects Arthur's bedroom directly with the underground stream that leads to the harbor.

If you print this map (PosterBrain will do a fine job for you; tell Poppy that Scipio sent you!), have fun by having each of the Leaguers start in their own bedroom and the attackers come in from the harbor and teleportation pad. Battle will probably take place in the main hall, with some maneuvering on the library level and the balcony of the quarters level. Let Aquaman take full advantage of the underground stream to sneak up behind his foes. If you field Batman make sure he hugs the walls where the trophies are, otherwise he'll be a sitting duck.

Some day I may try to compose a map that hews much more closely to the original, smaller design of the Secret Sanctuary, rather than being inspired by elements added later. But for now, enjoy this map and the individual touches that each hero brought to his or her living quarters.
Posted by Scipio at 8:10 PM 11 comments: