So, I’m sure you aware of the MYSTERY shrouding the DCU after September when Flashpoint wraps up, and that some kind of ‘bombshell’ announcement is planned for early June.

Many theories have been posited, from the bland (“So and so will be the new creative time on Icon-man!”) through the hopeful (“DC will announce a JLA movie!”) and idiosyncratic (“Vibe will be the new Protector of the Earth!”) to the preposterous (“DC will stop publish monthly comics”).

Okay, I confess: the Vibe one was mine.

But consensus centers around the idea that the DCU will get a universal reboot. Much of the discussion consists primarily of reactionary eye-rolling (“DC is addicted to universal reboots!”)… and much of that is deserved. However, much of it also seems to miss an important point:

DC has never had a universal reboot.

Oh, it’s shut down some non-working programs with Task Manager, and cleaned out its cache a couple of times. But an actual reboot? Nope.

After Crisis of Infinite Earth and Zero Hour, there were a few changes to backstory (“The Kents are alive!” “Wonder Woman wears sweaters!”), but for the most part the whole DCU pretty much picked up in medias res and moved on. Except for Superman and Wonder Woman, we didn’t watch any characters “start over” again. And as for Infinite Crisis, well, the only thing that came of that was a run on CVS for aspirin to recover. Morrison succeeded to some degree, in that he convinced me that the Anti-Equation did exist; except it was titled Infinite Crisis, which convinced me that life was meaningless and sapped me of my will to think for myself; Morrison likes that.

The closest thing that DC has ever had to a universal reboot wasn’t really announced and was, well, a “soft reboot”: the Silver Age. “The Big Three” kept a thread of continuity—too much momentum there to waste—but everything else got restarted. Of course that was easy to do since… everything else had stopped. During the dark interregnum between the Golden and the Silver Age, virtually no superhero comics—the pillars of DC continuity—were being published, other than ‘the four superfriends’ (Superman, Batman, Wonder Woman, and Aquaman; and I guess Green Arrow, but we all know Green Arrow doesn’t count). DC created a whole new DCU, including a new Flash, a new Green Lantern, a new Hawkman, a new Atom, some freaky Martian, and a modernized “JSA” (now named the “JLA”) practically overnight.

And that was exciting! So was the reintroduction of Superman and Wonder Woman after COIE. I, the reader, was right there in on the ground floor for this ‘new’ but familiar character. They kept their iconic value—reclaimed it, really, by shedding years of accumulated literary dross—and began new adventures with fresh interpretations of their familiar foes and friends. Whether you liked all the decisions that were made in the process is beside the point; the approach was the right one.

Think of some of DC’s most exciting multimedia projects since COIE: Batman the Animated Series, the Justice League Unlimited, The Batman movies, the Teen Titans cartoon, Batman: Brave& the Bold. A huge part of the fun was… the starting over. Watching this new version of the DCU reveal itself and evolve bit by bit.

I’m hoping DC has the cajones to do a real universal reboot. They might pick up new readers; older ones like me will stick on; it’s the middling ones, the ones who can’t imagine a world without a “Nightwing”, who might bolt. But DC has got to do something to make their stories more accessible. Mainstream comics have long since given up on the principle that “every comic is someone’s first”; instead they cling desperately to the principle that “this comic must NOT be someone’s last!” This gives us an endless cascade of ‘can’t miss’ cliffhangers to keep dying addicts addicted, rather than an endless parade of new stories to keep new readers interested. That parade is EXACTLY why fans love most of the multi-media versions of the DCU: stories that are enriched by having knowledge of DC history, but not dependent on it.

Wouldn’t it be nice if DC were bold and brave enough to take that approach to their monthly comics? I think it’s time.

Well, even though I took my issues of 1983's "The Daring New Adventures of Supergirl" with me to Carnegie Hall last weekend, turns out I was too busy to get much work done on them. Imagine. 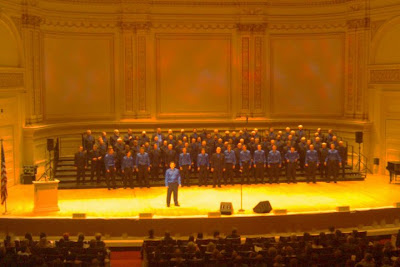 That's me, announcing on the Carnegie Hall stage. Yes, really. And all I could think was... "My god, now I know how Dazzler felt!'
But I did manage to get this project completed, in honor of my Carnegie Hall debut (which raised over $170,000 for Sendai/Tsunami relief, I'm happy to say)....

"THE THEATER" map for Heroclix! 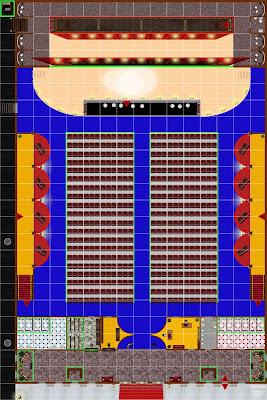 It takes advantage of the new expanded rules for elevated terrain; the theater itself is level 2 elevated terrain, the street and the orchestra pit are level 1, and the box seats and tech catwalk are level 3. The front lobby has windows (windows can be 'broken' with an attack of two) and the stage curtain is special orange terrain that blocks line of sight but not movement (it appears green in the photo because what you see is not the final version of the map).

So many wonderful scenes can be replayed as games on this map! The bid for Batman's secret identity from the Englehart run. The Joker taking Pagliacci's place. Two-Face holding up the entire auditorium while his face is projected on the screen. Dazzler at Carnegie Hall!!!

If you want a copy of "The Theater", just send me your email address and I'll be happy to send you the file.