Green Arrow vs. The Pirates, #1: Something Ought To Be Done!

It begins in the great seaboard city that Green Arrow calls home.

He calls it 'home' because it doesn't have another name. At least not yet; this is early Green Arrow.  Hilariously this pirate ship is... quite literally a pirate ship. Not a modern ship for plunder, a robber-craft, as it were.  It's just a crappy bedraggled sail-driven schooner with the cast of "Penzance" aboard.

Is this anachronistic approach endemic to backwards-thinking Star City?  I mean, its crimefighter uses a bow and arrow.  Are the newspapers made on Gutenberg presses?  Do they use candles instead of lightbulbs, and if so are they made from tallow? It would explain much.

Speaking of anachronisms, the pirate ship naturally has on it an Unwilling Cabin Boy:


I've read Treasure Island, by the way, and pirates are not glamorous in the stories told about them, if you are paying any attention.  They stink, are unshaven and badly nourished, and are covered in a hodgepodge of bad tattoos; they are the Carnies of the Sea.

Meanwhile, as this Stevensonian nightmare is unfolding along the waterfront of the great seaboard city, urban sophisticates Ollie Queen and that boy who unaccountably lives with him idly ponder the news.

Poor, lazy Oliver.  "The Harbor Police, what DO we pay them for?! Yas, someone REALLY should do SOMETHING. Something that doesn't involve my lifting my ass off this magenta credenza,  because my hip is KILLING me." Count dysplasia among the 1001 Ways To Defeat Green Arrow.

Eventually, the boy's sense of civic duty (or boredom, because "trapped in an apartment with Oliver Queen") impels them out of their apartment (because Ollie spends too much of his money on arrow-crap to afford a HOUSE) and into ....


Note that not only is Ollie not the World's Great Detective, he's not any kind of detective at all.  Noncommittal, he relies, as usual, not on planning or thinking (which is Speedy's job) but on dumb luck. Fortunately, he is almost as lucky as he is dumb. As we shall see tomorrow... .
Posted by Scipio at 7:02 AM 1 comment:

Green Arrow vs. The Pirates #0: Pssstt! 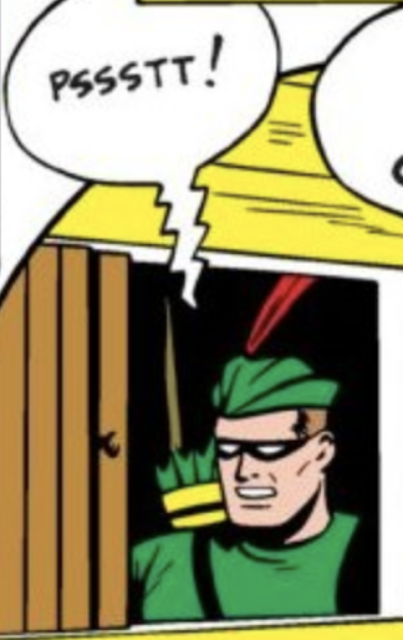 I have a story to tell ye this week! 'Tis a story 'bout

'n' his struggles against the wicked crew of THE BLACK RAIDER!

This pirate yarn'll be fun fer all ages!