…in my comics this week.

Wonder-head-butt!!! I was dumbstruck with awe at the sight of Wonder Woman head-butting a centaur this week. Now we finally know why she wears that tiara (and why it’s clearly NOT a princess-y tiara). It wasn’t just the head-butt itself that was over-the-top fabulous. It was the little smirk on WW’s face beforehand that said, “Heh, if this stupid centaur thinks he can step on Wonder Woman THAT easily, he’s got another think coming, and now I’m perfectly positioned to latch onto him with the vise-like grip of my mighty Amazonian thighs and head-butt the Hades out of him… thank the gods I’m not wearing pants!!!” And, yes, that’s why she doesn’t wear pants – for the same reason she doesn’t wear sleeves. Although she does wear arm-bracelets and a choker that appear to be designed so that she injures herself through any sudden motion. Tough lady.

The team has struck just the right note with Wonder Woman herself. Yes, she is butt-kicking warrior. But she’s also gentle and wise without being saccharine (“I could take that key right out of your hand; but…”); powerful without being overpowering. Honestly, this is first time I’ve read a Wonder Woman comic and thought, “Hey! That’s Lynda Carter!”, and I mean that as a whole-hearted compliment.

Azarello and Chiang knocked this one out of the park. This is how a book with gods & monsters should read; creepy, gory, spooky. The Incendiary Trio of Prophecy, the Rolling Head of Flicka, the Caduceus Key. It was like reading an issue of Gaiman’s Sandman, and I mean that as a whole-hearted compliment.

Bat-computer-linked Bluetooth contact lens with facial recognition and lip-reading software? YES, PLEASE! Look; I love it when Batman bops someone in the head with a batarang as much as you do. But he deserves some post-Australo-Aborginal tech, too, don’t you think? I mean, other than the Batmobile? And those contacts are enormously practical, like a little digital nomenclator sitting right on your iris! PLUS, they allow the author to use them as expositional caption boxes; genius. AND they allow for the whole “Sir, we got an anonymous tip that Grissom’s men are cleaning out Axis Chemicals” routine. You know, Ollie’s stepping up the tech over in Star City – oops, I mean SEATTLE *eyeroll—so Bruce needs to up his game. These contacts and the “CSI gloves” he uses are exactly what is needed.

Batman is Detective. Don’t get me wrong; Detective #1 was certainly… interesting. But it was all “Batman mixing it up with pointy-stabby naked Joker”. If that sort of thing is going to be in a Batman comic at all (and I’m not sure it SHOULD, since I’m fan of Murderous Joker but not of Violent Joker), it should be in Batman and not in Detective. Meanwhile, this first issue of Batman read like, well … what an issue of Detective should be. It had Batman using forensic science on the fly and in the field, Batman making deduction, clues both clever and dramatic, and one HECK of cliffhanger mystery. THIS is Batman comic I REALLY want to keep reading out of interest, not obligation or devotion. And on top of that, an intelligent, civically engaged, outgoing Bruce Wayne with plans to renovate Gotham is honor to his parent memory. THIS is the Bruce Wayne we needed during No Man’s Land. And I mean that as a whole-hearted compliment.

It’s all about Brainy. Ah, the Legion! The one comic that has always prided itself on a continuity-based impenetrability that makes the Iron Curtain of Time look about as solid as the protoplasmic slime that remains after touching Glorith’s hourglass of devolutionary radiation (how’s that for an obscure Legion-history-based metaphor!) . Naturally it makes perfect sense to me. Happy to see the Legion still explains very explicitly the ONE thing that the casual reader is most likely to already know or to be able to deduce: what the Legionnaire’s names and powers are. But that’s okay… because that’s really all you need to know in a Legion story… the rest just kinds of works itself out as you read. The future’s supposed to be a little mysterious and vague, after all. The Legionnaires are efficiently and traditionally characterized. Cham’s about stealth and subtlety, Mon-El is about the power/responsibility equation, Colossal Boy’s about being an oaf, and Brainy is about Brainy Being The Smartest Person in Any Room. As for Ultra-Boy, he’s still a beefy bad boy, but they show him using his vision powers as much as his other ones; that’s good, since those are the ones that keep him from being just a Flying Brick. The new recruits didn’t seem like very interesting additions, but who knows, maybe they’re just typical Legion cannon fodder; I certainly wouldn’t mind seeing Dragon-Face (or whatever her name is) get offed. Naturally, the Legion is (as always) “woefully under-manned and under-powered due to our recent losses”, including, apparently, the little-mourned Earth-Man. And I don’t mean that as a whole-hearted compliment.

Rage of the Red Absorbascon....! 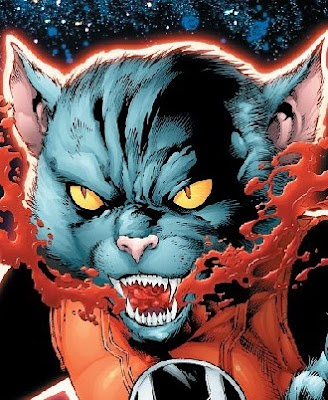 I’ve been slowing let the new DCU sink into my bones before I sink my fangs back into it (um… except for the two posts where I already did). For the record, I support DC’s decision, I think they are doing the right thing in principle, and in practice most of their continuity have the whiff of commonsense about them. Some decisions are certainly not consistent with my tastes (Darkseid? Deathstroke? Eyeroll.) But that’s to be expected. No version of the DCU is going to be entirely to any one fan’s taste; if it were, it would probably only have one fan, which is not a good business model. 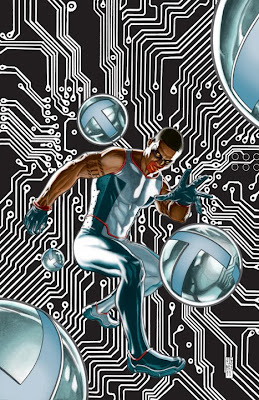 That said, it’s time to comment on some of things I’m not liking, spewing forth my carmine bile like Dex-Starr the Red Lantern Cat.

Mr. Terrific. Gainluca Gugliotta: put down your pencil… step away from it slowly and keep your hands in the air; you are under arrest for crimes against art. Usually I’m not fussy about art (at least I do not think of myself as being fussy), but the art in Mister Terrific is, frankly, unacceptable. No one should be drawn with a neck that looks like I could personally crush it in one of my tiny little hands. How much worse is it when that person is Karen Starr? At times many of characters have an odd, warped look, something like those caricatures that street artists draw; I had to double check to make sure that this work was paid for by DC and not the WPA. It was as if the artist had been possessed by the ghost of Gene Colan, then fell down drunk with inspiration and drew everything from the perspective of someone who can’t get up off the floor. I thought Mr Terrific was supposed to be hip, not FULL OF HIPS. HIPS EVERYWHERE. Giant hips. Thrusting at you, shattering the Fourth Wall. Great Shades of Elvis! Of all of the art styles I might have encouraged to be used for Mr Terrific, Pelvic Transquartomuralism was not on the list. 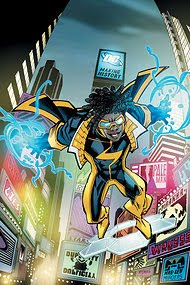 the new Spider-Man is black! And by that I do not mean Miles Morales in the Ultimate Universe. I actually mean DC’s Static, who is so annoying with his” juvenile patter while fighting in the Manhattan (and not Dakota) skyline” routine that I wanted to jump into the comic and expose myself to some dangerous chemicals or radioactive experiment, just so I could become a supervillain long enough to punch him in the face. This saddens me. I liked the cartoon show a lot; I really wanted to like this new Static and his book (particularly if DC is sacrificing Black Lightning from continuity just to give this kid breathing room). But honestly, I do not anticipate continuing to play money to subject myself to this comic. Although recent developments suggest I may wish to delay that decision.

Suicide Squad. DC, I call you cowards: that is NOT Amanda Waller. Part of the reason I loved Amanda Waller was precisely because she wasn’t an aerobics instructor wrapped in spandex. As I’ve said before: there are fat people in the real world. Many of them are accomplished, powerful, interesting, influential; just like “normal” people. Once upon a time, DC had a place for those people in its world, too. But fat people must now be condemned and cannot serve as positive role models, because, well, gosh, any decent person simply doesn’t get fat. So long, Etta Candy the Solid! Good bye, Amanda Waller the Hefty! If we permit you to exist, it’s only after a trip to the same Fat Farm Alfred Pennyworth got sent to, all those years ago. 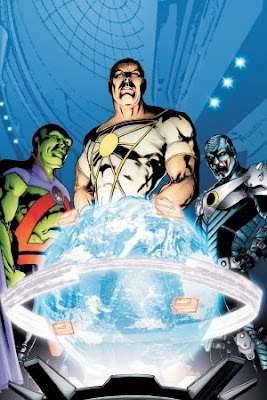 s so curious how the Wildstorm Universe characters would be come across as integral parts of the DC universe, rather than being stuck in their other dimensional shtetl . And now I know: BADLY. Suddenly, they all seem… ridiculous. Most of them have absurdist hypostatic powers that are pretty much just like the magick-y style powers of Golden Age heroes that let them do whatever the heck the writer wanted them to do. When J’onn J’onnz is most normal, realistic character in your book, your book has a problem. Or perhaps I should just say, “I have a problem with your book”, which is trying so hard to have been written by Grant Morrison I can see the strain on every page. It will be a shame if comics only gay-male couple + the freakin' Martian Manhunter isn't enough to keep me interested in a comic. But a shame it may have to be... .

Batwoman. Okay, I have nothing bad to say about Batwoman. So what if I can barely follow her zany backstory, even though I read all her previous issues and should know her backstory already? Batwoman is just … beautiful. It is what comic book art should be: it is stylish, uses the medium fully, and does so in service of the story. And Batwoman herself? Pretty much the best character design ever. Long after DC’s new found obsession with kneepads, functionality, and collars is forgotten, Batwoman will still look exactly as she does now: Red and Black and Fabulous all over. 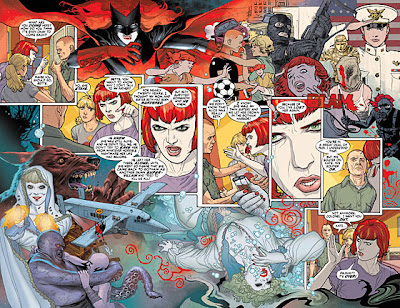