This time, the Giant Ants have come for YOU

So, last night I was playing a solitaire game of Heroclix, with the 1954 film Them playing in the background... not because I was actually watching it, mind you. It's just one of those films you simply don't change the channel from or turn off once it's on. Truly, the finest film ever made in which giant ants kidnap children in Los Angeles.

Anyway, I wasn't paying it any mind, so intent was I on the Dynamic Duo's attempts to get past the Joker's goons. Suddenly, I was jolted out of my Gothamite reverie by two quick and truncated iterations of.... the Wilhelm Scream.
Now, I have absolutely no doubt whatsoever that if you are reading my blog, that you have heard the Wilhelm Scream at some point, although you may not have recognized it as such. You'd have to have avoided films nearly entirely never to heard it. My father, may he rest in peace, knew next to nothing about comic books, but he was a movie nut who was able to rattle off the filmography of Francis X. Bushman long, long before there was IMDB.com. And my dear sweet white-haired flower-tending mother is a monster/horror movie expert who's counting the days until she can toddle down to the Bijou with her bonnet and reticule to see "Final Destination 5" in 3D. As result, while I'm definitely not a movie fan, I can't help but pay attention to movie trivia, like the Wilhelm Scream.
So, while it had slipped my mind that the Wilhelm Scream occurs in "Them" (four times, in fact), even in the distant background it was instantly recognizable and shook me from my comic book dreaming.
Well, the same thing is happening right now. Except the giant ants have been replaced by... 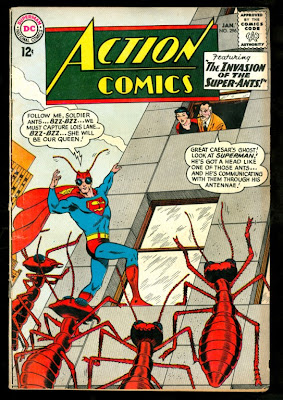 universal reboot.
And I can no longer fight the schadenfreude of it all. I am now laughing, out loud, at the Wilhelm-screaming panic of my fellow comic book fans. "*Sputter*! The... the continuity that I've invested so much time and emotional commitment to is... is being tossed aside! BETRAYERS!!!!"

I puff my metaphorical cigarette nonchalantly at your distress... welcome to 1986, kids. You'll get zero sympathy from my corner (that's zero as in "Zero Hour") during your little crisis (that's crisis as in, well, every other reboot). Where were your voices when the Penny Plunderer was erased but the Giant Penny remained? Why were you silent when people started pretending that J'onn J'onnzz, who had been absent for the entire Bronze Age "has always been the soul of the Justice League"? Where was your outcry over losing characters when they killed Supergirl or Vibe? Where were you when my DCU was taken from me...?

Perhaps you weren't a reader at the time, or weren't even born yet. For whatever reason, you didn't care about these things, because, well... they were before time. They weren't part of your comic books.

When I was a kid, comic books and associated publications had reprints of Golden Age and Silver Age material in them. It was wild and weird or at least very very different from what I was used to reading. But I was still trained by DC to consider it an important or at least relevant part of "my comic books" and their background.

When the Giant Ants of the Crises came, I didn't scream. I knew I didn't need all those stories "in continuity". They were, after all, still in my head, which has a greater capacity to hold stories than continuity does. Continuity has trouble containing contradictory stories within itself; my head does not. And, who knows, clearing the decks for new stories might bring me some new stories I might enjoy. Which is, in fact, what happened.

You didn't care when the Giant Ants came for someone else's version of the DCU. So now the Giant Ants of the Universal Reboot (and, yeah, I will continue to call it that, no matter what DC tells me) have come to destroy your version of Barbara Gordon. Or the Atom. Or the Teen Titans. Or Superman. 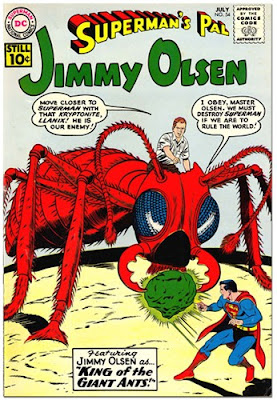 Well, you know what? I do not care; man up. You don't own these characters and neither do the creators who write their adventures; the publisher does. Do I always like what they do with them? No. But I do like the fact that they are, for the first time in what seems like forever, more interested in getting new readers and in going forward than they are in looking backward and keeping old readers (that means you now, kiddies; welcome to adulthood).

You've been enjoying your shrinking picnic in your private little sandbox of continuity for some thirty years now. And now the Giant Ants-- the fiends!-- have come to spoil it for you. 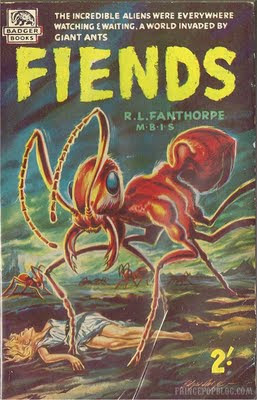 Go ahead and run away screaming the Wilhelm Scream if you want; I'll be laughing at you as you do. Because you, the reader, can, will, and eventually must be replaced. DC knows this, even if you're only just figuring it out.

Or you could stay and welcome our new insect overlords, as I intend to. Because the Giant Ants will win; whether you will win depends on which side you pick, not how hard you fight. Some planned posts have been delayed because it’s my busy season with the chorus; our Annual Retreat was this last weekend and tonight I’m emceeing our performance at the annual dinner of the Supreme Court Historical Society. PLUS, to prepare for the New Age of DC Comics, I’ve been sewing collars on all my tee shirts and practicing wearing my underwear on the inside of my pants, instead of the usual way.

But, with the conceptual assistance of my friend Noah and several Navy Seals... 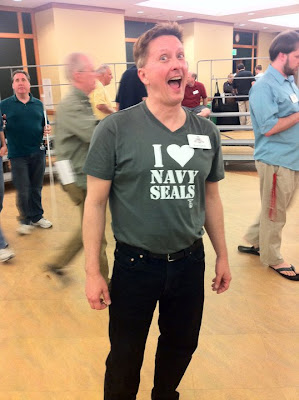 ...I did manage to create a new Heroclix map designed as a perfect arena for battles between land and sea forces. It began as a simple intellectual exercise in how to represent the vertical nature of the thalassic environment, using Heroclix rules to mimic the epipelagic, mesopelagic, and bathypelagic zones... 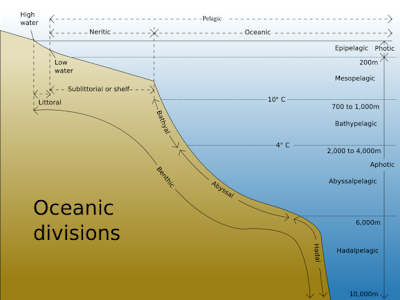 Hey, the ocean drops off almost as fast as the sales of "Seaguy"!

...but evolved into finding a way to tune a map into a form where both aquatic and non-aquatic figures can play, each with their own home-turf but sharing a common mid-ground. 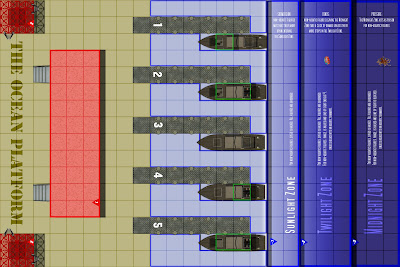 I usually do not mark the starting areas on my maps (since the traditional starting areas at the ‘top’ and ‘bottom’ of the map are well known to Heroclix players). On this map, if you are pitting a land-based team against a sea-based one, you’ll use the traditional starting areas (with, in this case, the land forces on the ocean platform at left and the sea forces in the Midnight Zone at right). If, however, you arraying two land-sea teams against each other, you’ll want to opt for the very ‘outside’ edges of the map as starting areas, placing each type of team member, aquatic and non-aquatic, in their ideal terrain.

One end of the map shows a concrete platform at sea. In its center is a building or structure whose roof serves as first level elevated terrain accessed by stairways in the rear. At its far corners are second-level elevation observation towers, each accessible by two ladders. Note that I’ve tried to use shadow size and placement to clarify the map’s various levels of elevation/submersion.

The platform terminates in five piers, at which are moored five smuggling boats, whose holds and hatches serve as hindering terrain. These dry areas are interleaved with standard water terrain to represent the surface of the sea (if you like, use a house rule to permit the aquatic figures to ‘swim under’ the piers and boats when they move). This combination of dry and water terrain forms the most likely ‘battle line’ of the opposing teams.

Then comes the sea. At first, I thought that the verticality of the ocean column could only be represented as a cutaway – very much at odds with the ‘top-down’ view of Heroclix maps. But I found a way around that by adapting the new rules for multiple elevated terrain. In short, the map employs “submerged terrain”, which combines the qualities of water terrain and elevated terrain (note that unlike elevated terrain, submerged terrain requires no "ladders" for access).

The first submerged terrain (at Depth Level 1) is the Sunlight Zone (a.k.a, the Epipelagic), the area where sunlight penetrates below the surface of sea. Text layouts the common characteristics of all submerged terrain: speed is halved for non-aquatic figures (due to water resistance, of course), all figures are grounded (because flying figs cannot hover above terrain that they are immersed in it), and figures do not block line of sight (due to the 3D nature of the environment). Additional text adds a rule specific to the Sunlight Zone: non-aquatic figures must halt their move when entering the Sunlight Zone. This represents the halting effect of dealing with change in the density of the environment (if coming from ‘above’) or pressure (if coming from ‘below’).

The second submerged terrain (at Depth Level 2) is the Twilight Zone (a.k.a. the Mesopelagic), where the light from the sea falls off. Here, for non-aquatic characters their range is halved and their line of sight only reaches four squares … unless they have an adjacent friendly aquatic character to guide their aim! So don’t send your land figs into the sea without a diving buddy, or the opposing aquatic forces will run rings around you.

That’s even more true in the third submerged terrain (at Depth Level 3), the Midnight Zone (a.k.a. the Bathypelagic), where sunlight simply does not reach. Due to the perpetual dark, all lines of sight from non-aquatic figs without an aquatic diving buddy are blocked. Furthermore the pressure is such that the terrain has effect of the ‘Poison’ power on any non-aquatic figs. That’s not something diving buddies can help out with, so don’t count on sending any land figs down this deep unless they have an inoculative power (Toughness, Invulnerability, Imperviousness). And when land figs return from the Deep, they have to take their time to avoid getting the bends; such figs take a click of damage upon leaving the Midnight Zone, unless they stop in the Twilight Zone along the way.

This is not an equal opportunity map. Aqua-fans will take to it swimmingly, but Bat-fans will be saddened to find that the Dark Knight is not suited to the dark deep (guess he didn’t have enough time to prepare). Marvel players will wish Dr Octopus were more like his namesake and even beleaguered Spider-man will be unable to turn off the dark.

I have some finishing touches to add: some sea gulls shadows, a scuba diver to decorate the Sunlight Zone, and in the Twilight Zone some fishes in the way found in the vicinity. Till then, you can get some of my other Heroclix maps (including the Carnival of Doom, the Civic Theater and two others that no one has seen: Civic City, and The Hideout) from the lovely folks at PosterBrain (They’re great, I use them for all my maps), who’ve been kind enough to set up a gallery of some of my recent maps ready to order here at this link. No profit for me; just want to make sure these are very easily available to anyone else interested in my custom Heroclix maps.