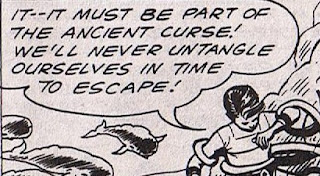 Do you remember Glum?

Probably not, unless you are of "a certain age".

During the Golden Age of Hanna-Barbera (1968 - 1970), there was a show called the Adventures of Gulliver, an animated version of Gulliver's adventures with the tiny Lilliputians. It was one of the cartoon features on the live-action "Banana Splits" kids show. 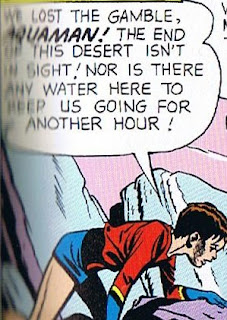 Now, the show had some interesting Lilliputians (such as Bunco, Eager, and the unfortunately named Flirtacia), but everyone who's seen the show remembers one of them much more than the others: Glum.

Voiced by the great Herb Vigan, Glum was the most pessimistic cartoon character of all time. Glum made Bad Luck Schleprock look like Richie Rich. Glum made Eeyore look like laughing Little Audrey. Once you've heard it, you never forget the pitiless, hopeless sound of Glum announcing flatly,"

"We doomed. We'll never get out of here alive."
Ironically, the voice of the can-do Gulliver was none other than Jerry Dexter -- the voice of Aqualad from the Filmation cartoons. I say ironic because Aqualad is the "Glum" of the DCU. 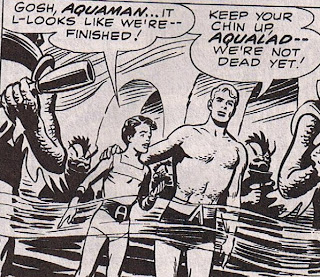 I have, most of you recall, mentioned this little failing of Aqualad's before. But I'm not sure everyone believes me... .

Now, we could blame Aqualad's doom-saying on the writers and the exigencies of story-telling. Aqualad's pessimism is part of his function in any Aquaman story, because Aqualad is mostly there to make Aquaman look good.

Whenever something happens, Aqualad has no answer for it or understanding of it. Aquaman figures it out. Whenever they are threatened, Aqualad announces that the problem is unsolvable. Then Aqua 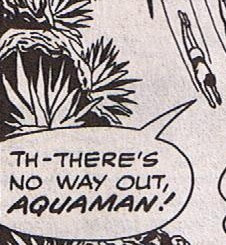 man solves it. Aqualad is used merely as a literary device to cue the readers on what their attitudes and viewpoints about the hero should be. "Neither you nor young Aqualad can see a way out of this; but Aquaman can. Isn't he cool?"

Poor Supergirl served a similar function for a long time for Superman. Read the Silver Age Supergirl stories; the basic schtick was that Supergirl's existence had to be kept secret because she didn't know how to use her powers while still keeping her civilian identity secret. She had all of Superman's powers and abilities, but wasn't able to use them with adult wisdom and restraint. Thus, the Man kept her down, shackled by her brown artificial pigtails to her broken metal bed at the orphanage.

Aqualad (as I've mentioned before) is the not really the underwater Robin; he's the underwater Supergirl. Just like Supergirl, he has all the powers of his mentor. Yes, including telepathic command of fish. What he lacks isn't power, but wisdom, ingenuity, and a can-do attitude. 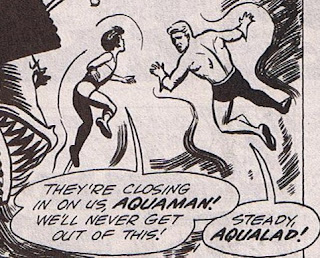 And, if scanning time and post space allowed, I could show you about a 1000 panels of Aqualad saying, "What's happening?" or "What are you doing, Aquaman?" Poor Aqualad never seems to have the slightest idea what's going on (unless it's impending doom; he recognizes that right away).

Robin and Speedy got treated much better than this. Often, they were the ones who pointed out what was going on, and their mentor would come up with the solution. Or, as soon as their mentor suggested a course of action or began one, they would pipe in immediately with, "I get it! By aiming out framarang arrows at the dynamo, we can create a field fluctuation that will draw their bullets off target!", or some such.

But Aqualad was always defeated, surprised, duped, and afraid. It wasn't his powers that made him a fifth wheel in the Titans, I think; it was his unshakable characterization as a terrified incompetent goofus that did it.

Is this a necessity? Is it, by now, intrinsic to Aqualad's character? Do the transdimensional vibrations from the Earths of the DCU simply not permit Aqualad to be portrayed as competent? Or is it because, having created a unique niche among sidekicks (former and current), it's the only hole into which the Aqualad peg fits squarely? 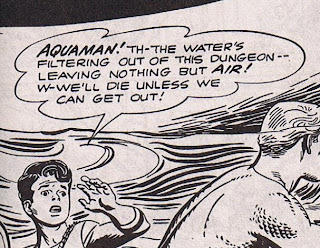 Sleepy-eyed cutie Phil Jimenez tried to bad-assifying Aqualad with his "Tempest" transformation. Regardless of the relative merits of that attempt, that characterization hasn't seem to catch fire. Maybe it's just me, but my principal memories of Tempest are:

Not the best track record. Perhaps there are other "Tempest rocks" stories that I'm overlooking, but, even so, it's fair to say Tempest hasn't been and isn't afforded the same kind of respect that Nightwing, Red Arrow, Wally West, and Donna Troy get. Or, for that matter, Jason Todd.

Should this be Aqualad's fate? Is Aqualad (I can never call him "Garth" without laughing) best as the uniquely Unsuccessful Hard-Luck Ex-Sidekick? Should Aqualad be redeemed as part of the (inevitable) return of the original Aquaman?

What do you think should be done with Aqualad?

I believe the first step is rescuing him from circus life. 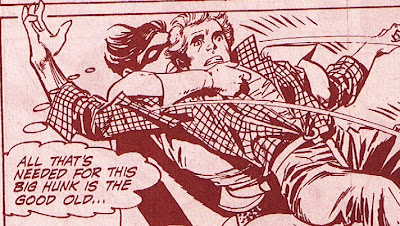 Whoa. Robin likes it rough. Well, you know how circus folk are.

I'm guessing the Big Hunk wrote that one. 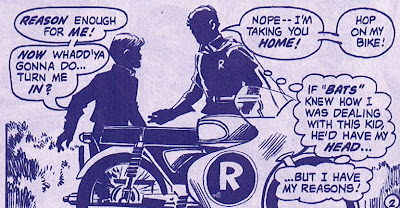 Oh, I don't know, Robin; Batman might be less upset than you think.
Particularly if you share with him the video.


And finally, the panel that made Baby Devin Greyson cry... 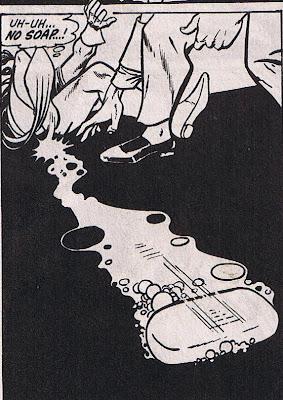 Robin's so tough, in fact, that when he plays drop the soap, he does want you to use the soap!

Curse of the Crab!

There was something in my comics that did not make me happy this week. In fact, it made me crabby. 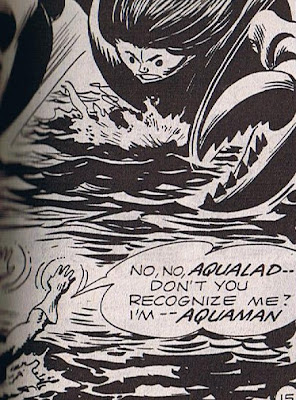 What makes us crabby is... 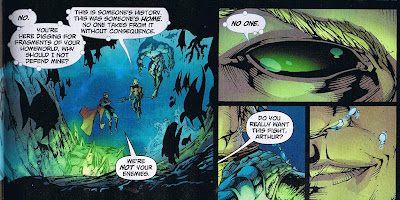 This scene is from the most recent issue of Superman/Batman, which I bought simply because it had (fake) Aquaman in it. After all, he's the only Aquaman we currently have.

The culprit is writer Michael Green. Foo on you, Mister Green, using Aquaman as a poor man's Namor, in a story that defies both common sense and previous characterization.

The story defies common sense. Batman and Superman are going about on the quest to sweep up all the kryptonite that fell to Earth when Supergirl arrived. The biggest chunk is in the ocean. Incomprehensibly, prefaced only by some irrelevant palaver about the seas not being spoils, Aquaman (that is, Aquaman Junior, not the real Aquaman) picks a fight with Superman and Batman. 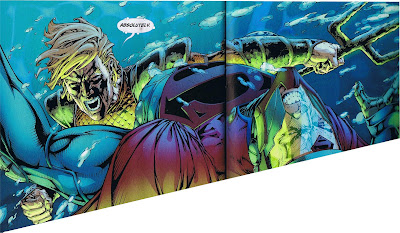 So, the world's largest single chunk of radioactive rock is poisoning the ocean floor and the site of an ancient Atlantean outpost, and Aquaman doesn't want it removed? That's simply moronic. It's not gold or diamonds nor part of some undersea history, it's a dangerous extraterrestrial material. Furthermore, some supervillain is eventually going to come looking for if the World's Finest don't cart it away. And that supervillain will not sit around chatting with Art Junior about it; he'll kill him and carry off whatever he wants. Look, I'm not a huge fan of Art Junior, but he's not a moron, for pity's sake.

Author Green just wanted somebody to actually question Superman and Batman's assumption that the world should be made safe for Superman. I get that. But it's also moronic.

Says Li'l Aquaman: "I will never understand this about you, Superman. It never once occurred to you that the world wouldn't be grateful for a savior." Uh, yeah. Interesting point. But I'm pretty sure if you polled the people of the DCU the general attitude would be, "Yes, on a scale of 1 to 5, I'm glad Superman was around to save us from that meteorite / invading space armada / cabal of crazed supervillains / Jimmy Olsen in a dress."

Green must be thinking of the ungrateful people of the Marvel Universe, who after 50 years still hate and mistrust the people who save their asses once a week. I guess that's also where he got the ideas that it's okay for heroes to attack other heroes, and the absurd idea that this Aquaman, to make some very abstract and not immediately appropriate point, would assault Superman and Batman, risking both of their lives.

You know what makes Aquaman's role in this issue even stupider? Do you remember what the last thing this Aquaman did in his own title before it was cancelled? Saved the world (or at least, most major popular centers from being sunk into the sea). Did he ask anyone whether they wanted a savior? No, thank goodness. He did what heroes do; he saved the day without being asked to.

You know what make it even stupider-er? When's the last time this Aquaman and Superman saw each other? Yes, that would be when Superman risked his own life to save Aquaman (and others) from the Collector. Aquaman seemed pretty darned grateful to have a savior at the time.

This Aquaman has clearly demonstrated he understands both the need to be a savior and the need to have one sometimes. Mr. Green, have ever read this character in anything or were you too focused on making your point to choose an appropriate character for doing so?

It seems that this Aquaman was made crabby simply because that was how people had been using the previous one... .

You know, originally, Aquaman was a fun guy. The kind of guy you could easily picture dancing in the aisle at a supermarket to the musak.


The kind of guy who would defeat Extraterrestrial Sea-Men and the Rainbow Cannons after making fools out of them using a goldfish and aquatelepathic ventriloquism.

to King of Atlantis. 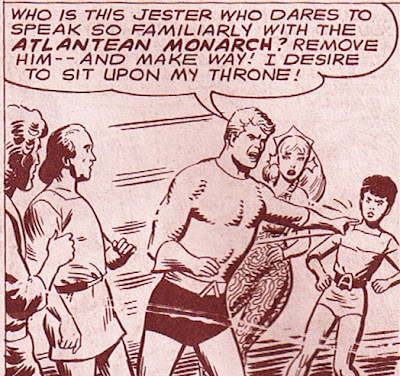 I guess that's enough to make anyone crabby. As the King of the Sea, Aquaman got to wander anywhere he wanted (in the sea), making fools out of pirates, saving lives, and teaching much needing lessons, like boating safety, hair care, and how to make a kazoo out of comb.

As King of Atlantis, he was stuck in one decrepit old European town, trapped in a bubble at the bottom of sea, which suffered and attack or an insurrection twice a month, and whose inhabitants were the thickest bunch of pinheaded ingrates outside of Marvel's Manhattan. So contemptible were the Atlanteans, Aquaman couldn't find even one suitable to be his queen, and he had to marry Mera the Mail-Order Bride from Dimension Aqua.

Because of Atlantis, Aquaman slowly but surely became a poor man's Namor rather than the witty, brave, and ingenious monarch of the sea he had been before. Crabbiness has eaten away at him like a cancer and appears for no reason to have infected his junior counterpart as well.

But Atlantis is gone now (pretty much) and the current Aquaman, Artie Junior, has no such ball and chain. Then why is he so crabby, Mr. Green?

Maybe he's figured out that Dan Didio is finally going to let him be killed off so Geoff Johns can bring back the real Aquaman... ?

P.S. In case you're wondering how the real Aquaman would react to such a situation...

He would publicly humiliate himself by losing an international olympic competition to that big-headed purpled-eyed freak, Aqualad, just to keep anyone from getting their hands on the kryptonite. THAT's how the real Aquaman was.
Posted by Scipio at 1:00 PM 10 comments: