Many of these are, in fact, comic book related, but some are not, so please excuse them. And, who knows? There may be an as of yet undiscovered comic book connection waiting for you to share.

Jean Loring: Since it's pretty much known she'll no longer be Eclipso, what should she be like after that happens? Gibbering, flame-throwing lunatic, or re-sanityized, repentant lady of intelligence?

Gilligan's Island: So, the reason Gilligan and Skipper made beds for everyone else but bunk hammocks for themselves would be...? Maybe Skipper actually likes Gilligan to fall on top of him regularly?

Vibe: C'mon; am I the only person who actually has known guys like Vibe? I mean, without the powers, of course.

The Brady Bunch: If Alice the Anachronistically Live-In Maid does the cooking and cleaning, just what the heck does Carole do with her day?

Flash: Which one of those Rogues should get an Orange Lantern ring?

Degrassi TNG: In the final analysis, everything is Terri's fault, and the only person who will survive the ramifications unscathed is Heather Sinclair. And, of course, Spinner.

Green Lantern: Does the prophecy of the Rainbow Corps and the Black Lantern Corps spoil the idea of the next Crisis being a re-boot? I'm confused... .

Wonder Woman: I really want the Olympian to be a permanent addition to the Wonder Woman dynasty, as her "Male Counterpart"; who's with me on this?

Crisis: If DC reboots to right after the original Crisis, what's the one story you'd be most sorry to have disappear from continuity?
Posted by Scipio at 4:12 PM 27 comments:


The Countdown Special #2: The Atom, which is so chock full of Jean Loring Mania that it practically explodes off the page, to say nothing of other loopy loveliness:

The Atom defeats an earthquake with a train.
Aquaman stops a tidal wave with octopuses.
Enrichetta Negrini, more beautiful and smarter than ever.
The Wind Pirate. I mean, really, the Wind Pirate. How long were he and Blockade Boy together, I wonder?
"Our best estimates give us three hours before the pressures within Jean Loring burst free and crush our planet in an orgy of destruction."
Bosun Beyotch.
Woman Wonder loses to Officer Clean-Up.
The utter lunacy of every panel with the Secret Society of Supervillians in it.
The phallocentric horror of Star Sapphire versus the robot plane.
"The world's most sophisticated electronic billboard."
Jean Loring proposes to Ray Palmer!
Posted by Scipio at 4:15 PM 14 comments:

The Meaninglessness of Supergirl

Judging from some of the Absorbascomments about this week's Booster Gold, some of you modern comics readers are upset by Booster Gold's inability to change certain events in history.

Linda Danvers has the super-power of negative thinking.
Still clutching to the belief that you have god-given free will? 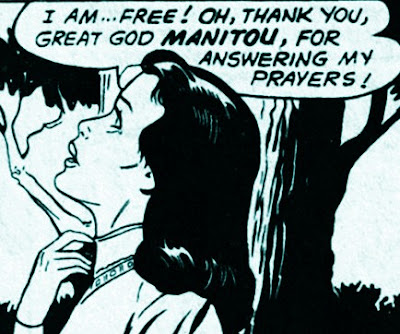 Innunchuk!
You know who we need to set our heads straight? Supergirl.

Supergirl, as I've mentioned before, is comic books' Demon of Determinism, the Devil of Inevitability, the Cuckoo in the Clockwork Universe. Supergirl is more terrifying than Swamp Thing, more bleak than Hellblazer, and more emo than Spider-Man. Master of False Hope, Supergirl invented the One-Step Program, the two-headed coin, Three-card Monte, and the four-way stop.

As we've learned, we can feel marginally better about our own lives because, despite her many abilities, Supergirl's super-self-awareness of determinism renders her powerless: 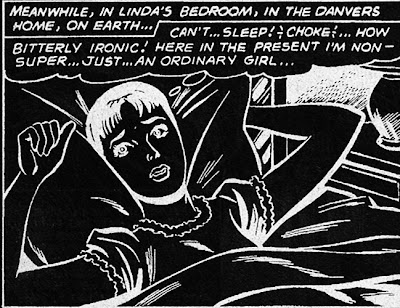 As opposed to the Danvers' summer cottage on Venus.
Only in yesterday's dreams and tomorrow's hopes have you any power, because those are illusions; here in the present, you can do nothing. 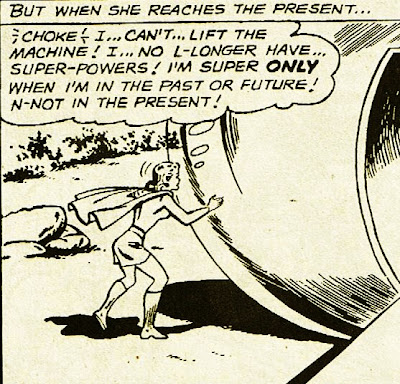 Supergirl *chokes* again.
Thus, Supergirl flees any responsibilities in the present (where all is pointless anyway), and seeks refuge in the past... 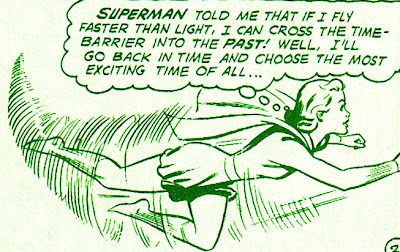 You mean, before the writer's strike?
and the future... 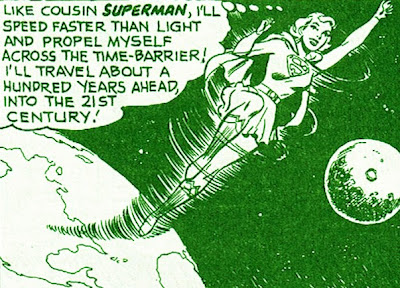 Where Mac McGarry is still hosting "It's Academic"!
But that safety is FALSE! Both past and future are merely other cell-blocks in the temporal penitentiary that is reality.

The future offers us no choices: 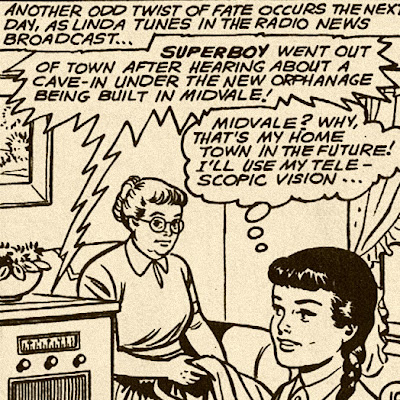 Did you vote for a new hair style for Linda (Supergirl) Lee?
It doesn't matter whether you did, because the inevitable result is that her new hairstyle is ...
the Odd Twist of Fate, by artist Jim Mooney. -- Ed.
Teach us, Supergirl, to fear the oncoming train that is the Future Express, headed straight for you on unswerving tracks to which you are inescapably bound. 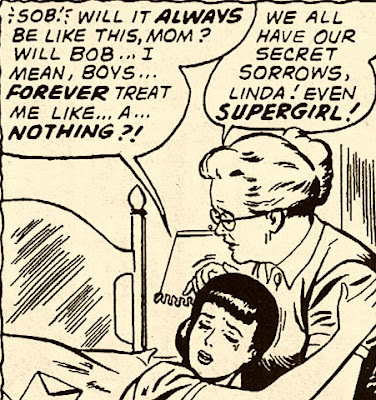 Mine involves Anderson Cooper. Nuff said.
Ah, yesterday's dreams, unrealizable in the crushing future, where Hopes for Good turn to Sufferings from Evil. 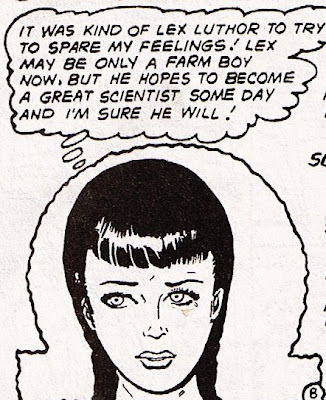 As well as baldness.
Oh, Supergirl. You try to cling to the inalterable past. 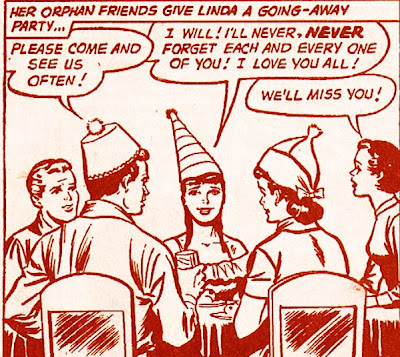 I will come back to see you only if you wear those hats. From now on.
You, however, can't. You're heartbroken from so many failed attempts to change the past, which, inconceivably, holds the same dangers as the present and the future. 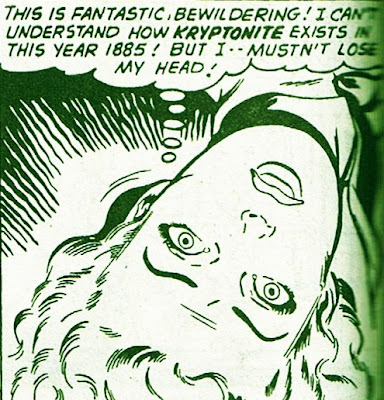 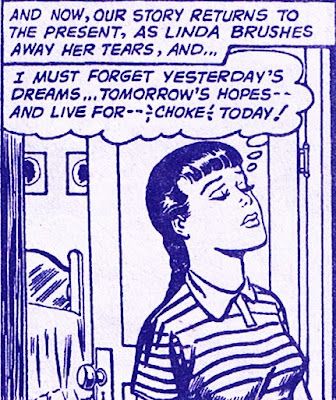 Attagirl!
Perhaps Cousin Superman can help squelch your hopes for a future that will never be! 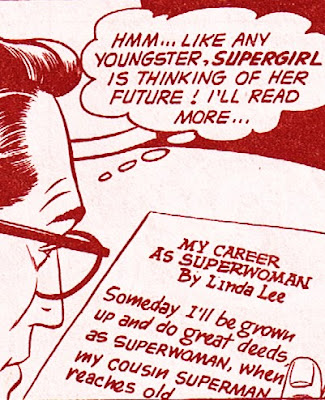 You will never be "Superwoman", Linda. Never. But Lois Lane will.
Fortunately, her cousin Superman is his traditional, supportive self: 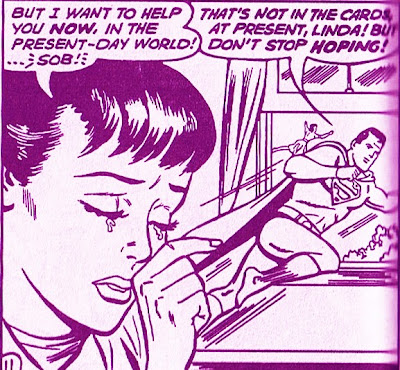 Do not ask about the flying doll.
That's right, Linda, dear; you are utterly powerless to help in the present. But, for Rao's sake, don't stop hoping. If you stop hoping, then the PAIN of daily disappointment stops. Accept the hope AND the pain. 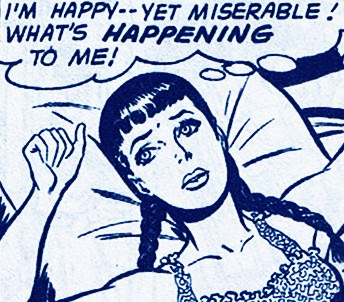 Um... you're becoming Jewish?
Thank you, Linda, for making us look backward in mourning for the past, look around at hopelessness in the present, and look forward toward dread of the future; truly it is a job for Supergirl. 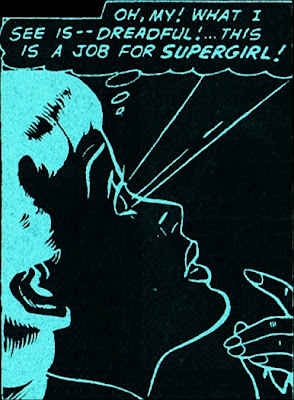