Things That Annoyed Me...

in JLA this week.


Thing that made me happy in Aquaman this week:

Email ThisBlogThis!Share to TwitterShare to FacebookShare to Pinterest
Labels: Black Manta, decompression, Things That Made Me Happy 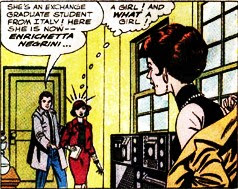 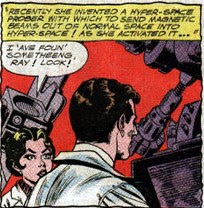 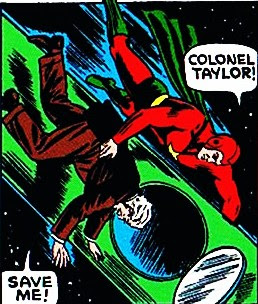 The War Against The True Enemy of Comic Books

Today, I declare war ... on decompression.

Comic books aren't storyboards for films. The filmic viewpoint has infected the art of comic book making. I have nothing against movies. I like movies. Some of my best friends are movies. But comic books, sir, are no movies. I'm not saying that filmic devices and techniques can't be used in comic books. They can; but you can also brush your teeth with a mop.

Control over time is essential to the art of film-making. Unlike a book, where the reader has the choice of how quickly they experience the events of the story, a film decides not only what you will see but the rate at which you will see it. Comic books don't have that luxury. Oh, sure, they can fill a page with static panels to denote, say, an awkward pause in a conversation. But we don't feel that the way we feel in on screen; the mind just skips over the inactive panels and goes to the next word balloon.

Here's the world of "compression", exemplified by one of the great works of literature "The Monster That Loved Aqua-Jimmy" (as I recall, a copy was included in the Voyager payload).

PANEL 1: "You're going on an adventure!" 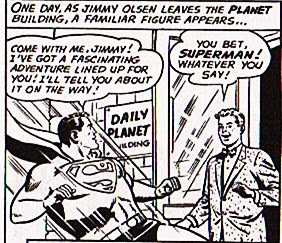 Superman is the catalyst who takes the protagonist out of his routine. 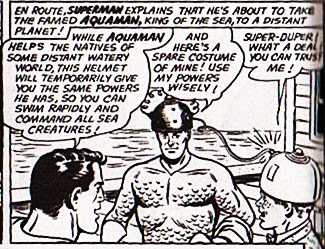 This panel establishes the hook of the story, tells you why Aquaman needs a temporary placement, makes it happen, and explains (roughly) why Jimmy is chosen: he's trustworthy. 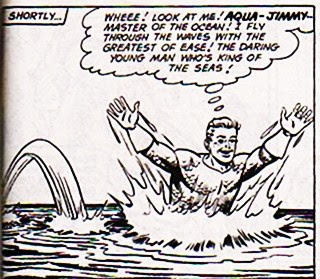 This panel conveys the information that Jimmy now has Aquaman's powers, enjoys them, and remains an enormous goober. 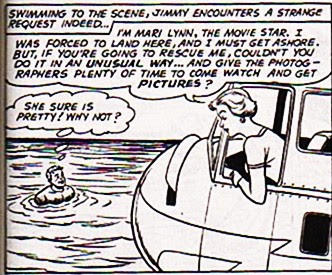 This panel sets up a challenge to Jimmy's new powers, one that isn't life-threatening but challenges Jimmy's imagination, and provides a reason that Jimmy would accept the challenge ("She's pretty; why not?").
Okay, perhaps "The Monster Who Loved Aqua-Jimmy" isn't great literature. But it does not dawdle. Advancing the plot is paramount; comic books are about plot. Character moments are extremely enjoyable but they should be the beautiful scenery viewed from a hot-rod plot; please do not slow down, pullover, or (Schwartz forbid!) take a detour to find a character moment. If you can't find opportunities to reveal character in the natural course of a moving a plot along rapidly, then you should be writing novels, not comic books.

Let's compare "The Monster Who Love Aqua-Jimmy" to a more modern story .... 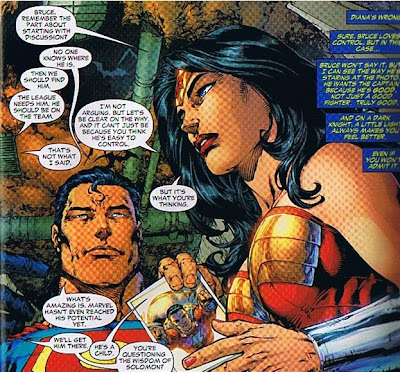 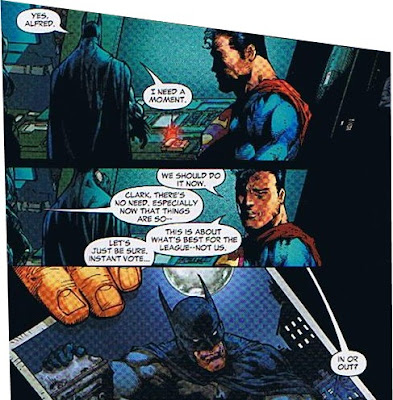 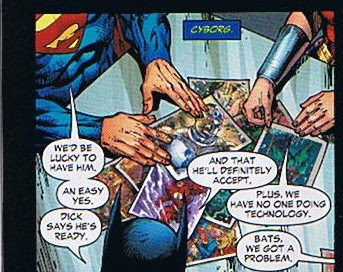 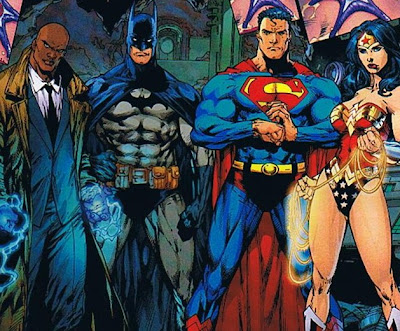 I'm not sure what the title of issue 4 is, but I always call it "The One Where They Stand Up!"


Now, I am aware that there are other things going on in those issues. I'm familiar with the Levitz model of advancing multiple plots and subplots. But I think you get my point; it seems that more happens in the first four panels of "The Monster Who Loved Aqua-Jimmy" than in the first four issues of the Justice League of America. This is what comes of editors encouraging creators to write novels using comic book characters rather than writing comic book stories.

I don't mean to pick on JLA or its writer, really; many modern comics are like this, since we live in a world where "stories" have been replaced by "storylines". I just wanted to pick one that most of my readers would be familiar with.

And please don't hand me that hokum about the economic necessity of writing for the trade. It shouldn't be an excuse to puff out what should be an action-packed 20 page story into a six-month snail race. If trades were composed of six action-packed stories (perhaps with some underlying theme to justify their compilation) rather than one bloated faux-epic, they would sell better, not worse.

Why do you think the Showcase volumes are so popular... nostalgia? In part, yes. But many people buying them have never read any of those stories before. They're not buying them out of nostalgia, they're buying them because they carry so much bang for the book.

Decompression is unsatisfying. Decompression is a root beer that's 80 percent froth. Decompression is like 4 hours of warm cuddling when you want 15 hot minutes of woo-hoo. If I wanted decompression I'd be reading Victorian horror novels like Frankenstein, with its chapter long digressions on Alpine scenery, not a sprocking comic book.

In film, the director controls the passage of time; in comic books, the passage of time is in the hands of reader, who can take the story as slowly or as quickly as he likes. That's why filmic tricks like "silent panels", by the way, backfire. They don't create a sense of pacing and slow down your reading; they speed it up.

Think of those two or three page sequences where the characters silently engage in kick-ass martial arts conflict. Exciting, aren't they? Of course not; no matter how well they are drawn, you naturally blank over them ("Oh; fighting.") and dash forward in your reading to the next written word. In film, such scenes are exciting; but comics, like it or not, are a static medium, and such scenes read like Egyptian wall paintings. Why do you think comic books so often have people talking, thinking, or being narrated during fight scenes? Why do you think fight scenes are spiced with energy blasts, batarang throws, giant props, and needless acrobatics? They are speed bumps.

Compressed storytelling has gotten a bad rep because it's associated with crappy stories. Yes, many of the stories written before the advent of decompression were stupid, but that doesn't mean they were stupid because they weren't decompressed. Sure, un-decompressed stories are challenged to get in the necessary exposition without using bursting word/thought balloons. But, face it, we have to suffer through those in your average Wonder Woman story anyway; wouldn't you rather have them advancing the plot than simply being so much empty badinage?

Think that a modern balance between quality and compressed storytelling isn't possible? Hogwash. There are many examples, but the easiest thing to do is read some Justice League Unlimited. Small wonder that JLU is popular with longtime readers yet still accessible to new readers and children. 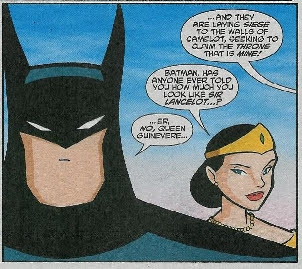 Oh, look:
a panel that contains both necessary, plot-advancing information and
a gratuitous but delicious character moment.
Apparently such things aren't impossible, after all!

Decompression, by the way, makes comic book myth very opaque to new readers; too little information is conveyed about who's who and what's what. Decompression is only possible if you rely on the reader to know a lot of information you aren't willing to stop to explain (What is that purple starfish? Who are Felix Faust, Prof. Ivo, and T.O. Morrow? Who the heck is Trident? Geez, I don't even know who Trident is). Decompression is the enemy of comic books because it's the enemy of new readers.

It would be hard to find a bigger fan of the new Batwoman (Kate Kane) than I. But today I sing the praises of the original Batwoman, Kathy Kane.

Kathy was a wealthy heiress/circus daredevil. Now, that may seem odd to you, if you don't live in the DCU. But attention-seeking media-hound wealthy heiresses are, in fact, not unheard of in our own universe. Kathy Kane was essentially Paris Hilton.

Except Kathy was smart. And attractive. And capable. And devoted to helping others. And clothed. And able to open a door without an instructional manual or a major loss of blood.

Okay, okay; she wasn't like Paris Hilton at all. But Kathy Kane was both glamorous and bold. BOLD! Characters really don't come any bolder than Kathy Kane.

How bold was Kathy Kane?

So bold that she decided to become a crimefighter, without even a scarring childhood loss to motivate her.

So bold that stole Batman's schtick without asking him.

So bold that she said, "Piffel!" when Batman told her to stop.

So bold she once slapped Batman in public.

So bold that she fought crime in a bright red, yellow, and black outfit. To do that you have to be either a total moron or incredibly bold. 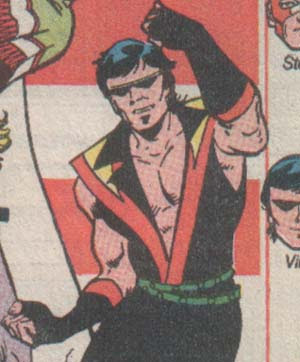 She was not merely bold, but noble. When the opportunity presented itself for her to unmask Batman and get him off her back, she let it pass because to take advantage that way would have been unfair. When the opportunity presented itself for Batman to discover her identity, he did, and promptly blackmailed her out of being Batwoman again. Paternalistic, chauvinistic control-freak.

Oh, and lest anyone forget, without Batwoman we wouldn't have Cat-Man; he was introduced to be her counterpart to Batman's Catwoman!

So while I love our current Batwoman, let's all give some credit to one of comics' original groovy chicks, Kathy Kane. Over time, I've become one of her biggest fans! 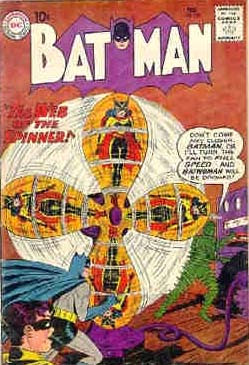 Remember voting a while ago on the next Heroclix that I should have custom-made?

Here are some of what you voted for! 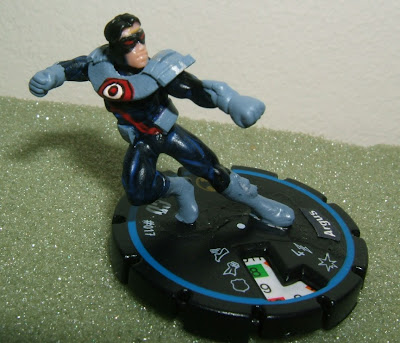 Don't remember him? Aw, sure ya do! Argus is one of the two or three acceptable leftovers from the Bloodlines crossover. Argus sits on an experienced Azrael dial; I mean, it's not like I'd ever use Azrael! Argus lives in Keystone and will augment my Flash teams (which have very little variety in their abilities!) 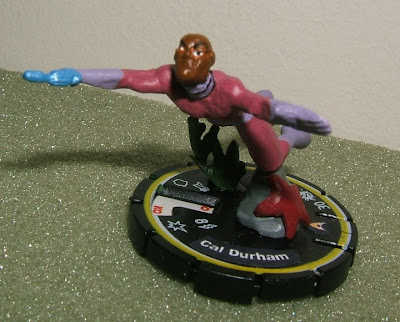 Cal Durham is the former Black Manta sidekick who went legit and was part of the extended Aquateam; nowadays, he's the mayor of Sub Diego. Naturally, Cal will help provide more options for my underwater games. 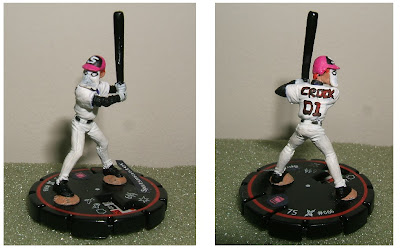 A Classic foe of the Golden Age Green Lantern and, of course, the star of the Greatest Story Ever Told. Sure, he may seem a little goofy, but none who used to fight Alan Scott to a standstill is a lightweight. So, he sits on a Veteran Taskmaster's dial, making him a nasty piece of work and one that could, with a bit a luck, actually take a chunk out of the original GL. 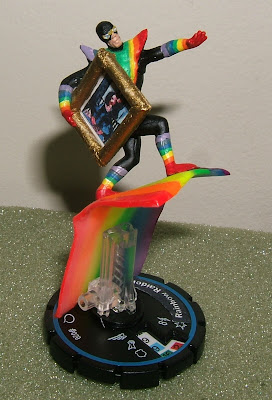 Really; what can be said about the Rainbow Raider that hasn't been said already? Besides, the Flash Rogues need some more muscle and he's actually pretty powerful.

Did I have him made because I love Rainbow Raider? No. He sits on a Halo dial. I had him made just because I hate Halo that much.
Posted by Scipio at 7:26 PM 21 comments: