Tec 823: How To Write A Superhero Comic

It's nice to have a reputation as a blogger who's not afraid to be unusual or controversial. Well, praising Paul Dini is neither unusual nor controversial; but I just can't help myself! 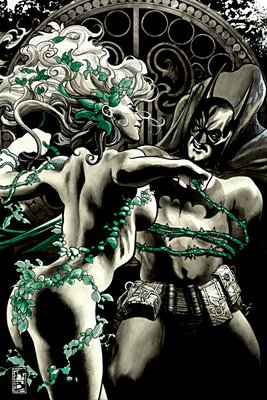 As I'm sure most of you are aware, Paul Dini is one of the genius writer/producers behind Batman: The Animated Series, and currently the writer on Detective Comics, his first regular comics gig.

The most recent issue (Tec 823), featuring Poison Ivy, was a fine example of why Dini's Batman is so popular, and almost serves as a primer for Those Who Would Write Batman Or The Like.


1. The story stands by itself.

And by that I don't just mean it's "done in one", although that alone is an accomplishment nowadays. I also mean it's tyronic enough that you could give it to someone who wasn't familiar with Poison Ivy (or even Batman and Robin) and they'd still be able to figure it out. Comic books should be a bit less ironic and substantially more tyronic.

Even more impressive, most of the information (such as Ivy's poisonous nature and her abilities with plants) is conveyed as part of the natural flow of the story, without recourse to the heavy-handed exposition so common to comics.

2. Although it stand by itself, it contributes to a larger whole.

By that, I do not mean it's part of larger "arc"; I'm sick of arcs. I think DC needs to stop hiring novelists and start hiring short story writers.

What I mean is, the story provides opportunities and ideas for other stories, but doesn't require them. In the pre-Crisis days, writers didn't seem worried that they were going to run out of ideas, and would casually toss ideas around left and right. Grant Morrison's tendency to do just that is part of his popularity. Great writers have no problem throwing out an idea and moving on to another. Neil Gaiman produced amazing new characters the way you or I produce sweat on a treadmill; as part of the process, not the point of the process. When later writers took over his creations, they beat these characters to death (including Merv Pumpkinhead, Lucifer, and Death herself).

Similarly, it introduces a new character ("Harvest") into the larger Batman mythos, whom another writer may or may not choose to use again. Writers used to do this all the time; Batman faced lots of villains who were never seen again (remember "The Blaze"?). His great foes were not introduced with enormous fanfare and force-fed to us into greatness; characters like that (such as Bane, Hush, or Azrael) are pretty much doomed. His great foes were introduced in exactly the same way as the one-hit wonders, but returned because they were popular or struck a chord with readers and writers both.

It enriches an existing character (Poison Ivy). I don't want to call this character development per se, because "development" usually means that the character changes. The long-term/cyclical nature of comic books does really allow for major characters to change; rather, our understanding of them deepens or their circumstance around them change to show them in a new light or provide new storytelling possibilities. Traditionally, Ivy attacks others with plants; what would happen if plants started attacking, and why? Dini's a master of this, this "character envelopment" which adds new and interesting layers to familiar figures. I'm sure if you'll think about his work on the Joker, Clayface, the Mad Hatter, the Riddler, Poison Ivy, and Mr. Freeze, you'll see what I mean.

3. It has characterization that derives from the plot without needing to contribute to it.

An example may make that murky statement a bit clearer. When Batman find Robin alone playing a word game with Poison Ivy, he shouts for him to get away from her. Technically, there's no plot reason for that. She is, in fact, in no position to harm Robin physically at all. But Batman has just seen recent evidence of how sick and cruel she is, and his instinctive reaction is to want to keep Robin away from her. Similarly, when he shows Robin the evidence he warns him to brace himself, and Robin asked Batman to please turn off the tape.

Those behaviors aren't needed for the plot to advance; but they serve to show Batman's paternal concern for Robin and his awareness that his partner is still a "kid", and Robin's reaction backs that up. This isn't a Poe story where every element must contribute to the story's end; time is taken, when the plot allows, to enrich the relationships among the various characters through their interaction, helping to create the feeling of integrated world of characters we "know".

I don't expect all writers to be able to do these things as well as Dini. But many writers seem not only incapable of such things but almost unaware of their value; that is something I would like to see change. Perhaps if they were less interested in telling "important" arcs and more interested in telling good stories... ?

Because I think I've come to the point where I believe those two goals are incompatible.
Posted by Scipio at 9:01 PM 20 comments: 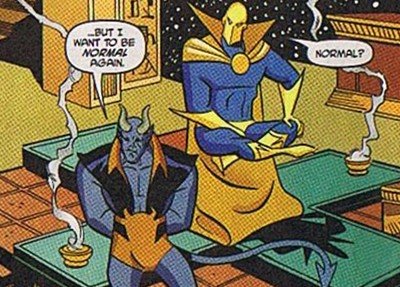 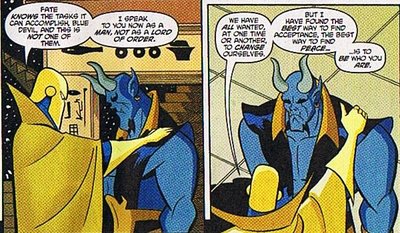 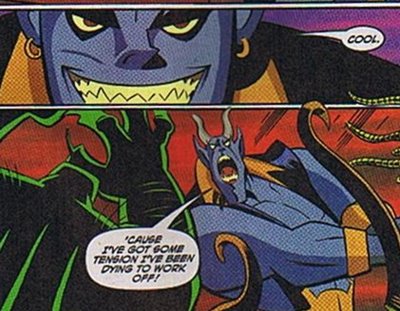 As previously mentioned, I think the Dibnys are/were are the Avatars of Sin on Earth.

He's a money-hungry camera-hound (basically, just a cleverer Booster Gold) and she's a spoiled debutante fifth-wheel desperate to hobnob with the super-set.

How bad is when you condescend to friggin' BATMAN AND ROBIN?! 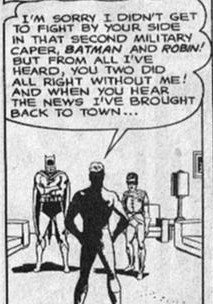 Yeah, I'm sure they struggled along valiantly without you, Ralph, all the time silently praying,
"Oh, if only the World-Famous Elongated Man would show up to help us with his extensible body parts!"

It's so bad, even Sue can't hide her disgust... 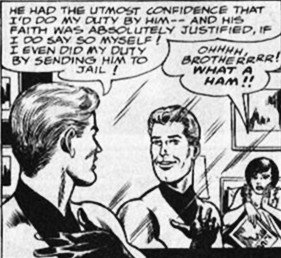 in this week's comics 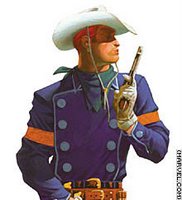 Devon, from over at our cousin blog "Seven Hells", went to the convention in Baltimore last weekend, where, as one of the comics cognoscenti, he hung out with The Big Names. He brought back many bits of gossip, but none I liked better than this...

His friend writer Jimmy Palmiotti (Hex, Hawkman, etc.) told him there's a story he wants to tell in Jonah Hex about a childless couple who seek Jonah's help. They are in urgent need of a heir, but that's something the husband can't produce. So they hire discreet Jonah to sire one for them surreptitiously. Jonah, as always, does his duty.

This is a story I desperately want told. Jonah Hex is DC's western Bringer-of-Death; I want to enjoy the irony of someone hiring him to bring life. And the opportunity to make "gun for hire" jokes.

DC won't let Palmiotti tell the story. I don't know why, but it may be because certain readers and bloggers who shall remain nameless have made DC self-conscious about the use of prostitution, rape, and similar sexual story elements. Maybe they just don't want Jonah to be viewed as a prostitute, but I certainly don't see it that way; this is clearly a case of "studding", not prostitution.

Besides, (as I have said before) there another reason this story must be told: 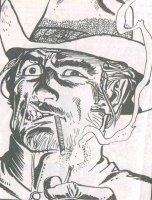 The family's name is Dent.

Please join me in publicly asking DC Comics to let Palmiotti & Gray tell this Jonah Hex story.
Posted by Scipio at 6:50 AM 63 comments:

So, someone asked me this weekend,

"As a humorist, what do you think the funniest thing you've ever written is?"


Actually, calling me "a humorist" is probably funnier than anything I myself have ever said. Bennet Cerf was a humorist (I mean, he published Ayn Rand and James Joyce; he must have had a sense of humor). I'm just a guy who comments on comics, which are themselves (appropriate to their name) intrinsically funny.

But, if I had to answer the question, I'd say the funniest things I've ever written were these sentences:


I still can't say that last one out loud without laughing my arse off. You had to be there, I guess.

But it's an interesting question for anyone, "humorist" or not...

What's the funniest sentence you've ever written?
Posted by Scipio at 10:03 PM 37 comments: