The Crusade to Vindicate Vibe

Help! A horrible injustice has been done and I need YOUR help to fix it!

Confessions of a Pop Culture Addict is a fine and respectable site ... but it has committed a Grave Sin against one of the saints of the DCU.

"Lame Character Lists" are a staple of any comic book discussion form; we understand that. We also understand that, since not all intellectual palates are of such strength and distinction as to savor the special spice that is Vibe, the poor, departed Saint Paco Ramone will often find himself on such lists. 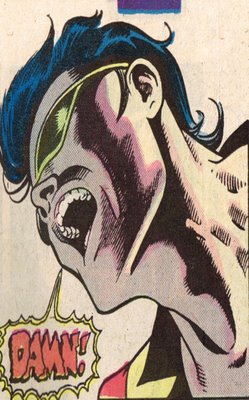 We accept that. But what we cannot, will not, must not accept is this:

It should be no surprise that Vibe was also killed, and never brought back and actually has no cult following at all. Everybody just kind of likes to forget about him. Vibe is thought of today as the stain on the legacy of the Justice League.

This must not stand. Call him lame all you like; but to claim that Vibe has "no cult following", that everyone wants to forget about him, and that he is thought of as a "stain on the legacy of the Justice League"...! Inappropriate; unwarranted; unacceptable!

Say what you will about his relative charms. But many think of him fondly, enough to consider his a "cult" following. My spies, in fact, inform me that some of the Pop Culture Addict staff are closet Vibe fans, cowed into silence by fear of public opprobium. Do not claim Vibe is forgotten or not missed. The Yazz is forgotten and not missed. Vibe is more popular now than he ever was when he was alive, as is so often the case with saints.

Vibe died a hero, trying to protect an innocent child and himself. That's not "a stain on the legacy of the JLA" in my book.

So, I charge you now, speak out! I have warned PCA to expect your messages and they await your feedback; contact them and let them know that the Cult of Vibe does exist, and ask them to recant.

ENOUGH!I say,if they will not bring this about,we should start punching a few walls,generate some SERIOUS probability waves,and do this work OURSELVES!

I'm not sure the indignity of being murdered by detachable robot hands doesn't outweigh the heroic circumstances of his death, but I do feel sorry for Vibe.

These days in the DCU, a superhero's body isn't even cold before someone new picks up the mantle. It's been 20 years. Where's the new Vibe?

Vibe's brother took the name "Reverb" in 1990's JLQ #1. And then appeared in a critically acclaimed supporting role in DC Countdown #1...

But it is actually better not to have someone take your name. Steel died - twice, like Jack of Hearts - and then someone completely unreleated took his name to play Superman. Now DC has no reason to bring him back every few years to keep trademark on the name.

Like Tula and Barry Allen, Vibe only becomes more popular the longer he has been dead. Cults, spotlight issues, even backlash. But where are the tears for Hank Heywood the III? Not even a brickbat.

(Heck, even Dr Tzin-Tzin is remembered by the verification word-bot! But no Steel...)

His brother took his mantle, but he doesn't call himsemf Vibe, he's "Reverb"

A parrot-like alien comic relief figure who belonged to the JLA in the, hm, 1990s was it?

I don't see how saying that Vibe is "a stain on the legacy of the Justice League" is any less sacrilegious then saying that is ok to Cassandra Cain go psycho even though it contradicts her entire comic run and specially her ending. Both are very capricious and unfundamented points of view that attack characters that only had a small niche of followers just cause the poster wanted to.

Aqualad and the Red Bee's inclusion were my annoyances, but everyone's got some lame character they'd defend to the death, I guess.

The V is the Kryptonian symbol for dance. Inverted, it becomes the symbol of rebirth.

He WILL be back.

Me, too, man. Adding Vibe (who's wasted potential embodied if I ever saw it) is just a twist of the knife. Not every character (especially in a team book) needs to have combat-friendly powers, dammit.

I also gotta note that apparently those who produced JLU like Vibe, as he showed up there many a time.

It seems to me that including anyone in Section Eight -- especially Dogwelder -- in a "Lamest Superheroes" list is a case of missing the point. Those characters were supposed to be stupid: gloriously, unrepentantly stupid, and hence highly entertaining (and even touching, once in a while). I was thinking that a character should be unintentionally stupid to be lame.

I'm a Douglas Ramsey fan too -- though I admit, when I first read about him as a kid, I did think, "That's it? He can friggin' understand languages?! Not shoot deathrays from his nostrils or turn into a giant monster or something?" (I was very young.) But my appreciation for his character grew over time; I especialy liked the older-woman romance that seemed to be brewing with him and the pre-ninja Psylocke. (And his powers DID come in handy in combat, sometimes -- didn't he help defeat the Magus somehow?) And then they killed him off in the most aggravating, unnecessary way possible, in that asinine Bird-brain storyline. ARRGH.

I seem to recall a time when Matter-Eater Lad was a great character too; the writer (writers?) of whatever incarnation of the Legion was running at the time made him a mayor of some place, or something like that. Yes, very specific of me, I know. Does anyone know what issues/era of the Legion I'm talking about? I just remember being highly amused.

I also remember Vibe. As a child, I only owned a handful of issues featuring that incarnation of the League, but I remember thinking he actually had a cool power, and thinking that his shades were bitchen.

After being (mostly) cured of insanity by Brainiac 5, Tenzil Kem became a senator and then president on his homeworld, Bismoll.

Thanks! Wow, President, huh? I wish I still had those old LoSH issues.

BROTHER POWER THE GEEK is a work of art. (Both original issues -- not the crappy Vertigo remix)

There. I said it. I would say it again if I had to.

I can't believe he dissed Arm-Fall-Off Boy!
Besides, it's like, a totally homophobic list. Red Bee "lame"? Oy.
--Josh

I for one sent them an e-mail! Who else did?

It cannot succeed as a matter of fact, that's what I suppose.
steel building