In his 1972 novel Invisible Cities, Italo Calvino said: "The city is redundant; it repeats itself so that something will stick in the mind."

The same could be said, I suppose, of the DCU.  As I recently noted, its "Apex Lex" storyline The Year of the Villain (I can't be bothered to remember what it's actually supposed to be called, because nowadays the number of concurrent world-changing crossovers exceeds the number of characters I follow) is just a redux of the 1995 storyline Underworld Unleashed.  But this sort of repetition occurs at not only the macro-level but the micro-level as well.  Characters get rebooted or have a 'transformative experience' that (at least in theory) improves them.

Problem is that, through editorial carelessness, nobody makes sure that writers are aware of and adhere to the update. Consequently, the character quickly reverts to its pre-update self and has to be re-updated.  DC keeps doing this with the Riddler, and I am certainly not the first person to notice; even popculture listicle sites notice.

The Riddler is a, if not THE, classic 'gimmick villain'.  This makes him an easy short-hand for (what is often incorrectly viewed as) a more innocent time in comic books.  As other characters get stronger or darker, he is updated to match, but eventually some writer can't resist him as short-hand and portrays him as a hopelessly outdated feeb (often to improve the impression made by some flavor-of-the-month villain that only an 11-year-old could take seriously).

The Riddler was a nearly forgotten character (having appeared only TWICE, in 1948) until Frank Gorshin made him threatening on television.


You may find it funny to call him (or anyone) from that show 'threatening' but he is BY FAR the most genuinely threatening and terrifying villain on the show (despite being so physically slight) because he is clearly both brilliant and bat-shit crazy.


But that was an actor-based energy imparted to the character that writers didn't manage to capture going forward.  Not only did they not continue it, they ruined it.  The Riddler's schtick was made to backfire on him in the comics when it became established lore that he "suffered from a compulsion to give clues" before committing crimes, a "fatal flaw in an otherwise brilliant criminal."

Originally what made the Riddler awesome was that he was SO FREAKING CONFIDENT that he happily gave out clues to his crimes, secure in knowing that either you wouldn't figure them out (the Gotham City cops) or if you did he was STILL smart enough to get away with it if you tried to stop him.  This is a common trope in the Golden Age; it's in the Joker's first story, you'll recall.


Like many Golden Age villains, the Riddler aims not to simply steal but to INTIMIDATE. The costumes, the props, the branding, the braggadocio, the clue-giving; Golden Age villains knew that law-abiders were a superstitious cowardly lot so instead of trying to hide themselves they tried to be publicly intimidating.


They weren't sneak-thieves; they were technicolor gangsters, trying to bully citizens and cow both the cops and lesser crooks. A character like the Riddler didn't fail as a villain because of his schtick; that's what MADE him an intimidating villain and not just another nameless gunsel in a cheap suit.


But later writers didn't understand this principle and made the Riddler seem less a mastermind than mentally crippled.  They turned his schtick into his weakness rather than his strength; he was no longer 'so mentally strong he could give clues to his crimes', but rather 'so mentally weak that he HAD to'.  This lack of understanding has led to the endless Riddler-cycle we find ourselves in, where the Riddler has to continually be re-established as a threat after being portrayed as a goofy failure.

Neil Gaiman uses him to represent that era as innocent, portraying him as an aging relic in charge of other aging relics (Secret Origins Special #1, "When is Door", 1989).

This went too far and the collective unconscious of the metaverse (apparently) struck back by giving us the most vicious version of the Riddler yet.  One year later, Peter Milligan has him use his riddles to trick Batman into accomplishing tasks (including performing an emergency tracheotomy on a baby who is choking on a ping-pong ball-- STILL one of the most disturbing things I've seen in a comic) ...


needed to raise a DEMON to give him occult power, with the express purpose of becoming a more 'mature' villain. [Batman #454, "Dark Knight, Dark City, Part III", 1990.]


The backsliding began quickly, because, really, who wants a demonically inspired or empowered Riddler?  In 1992, Batman: The Animated Series re-cast the Riddler as an aggrieved video game designer.  Despite the perfect voice-casting of John Glover as the Riddler, "aggrieved videogame designer" simply doesn't strike fear into the hearts of citizens. The BTAS Riddler, sadly, never seemed as cool as The Clock King. THAT guy was cool. The BTAS Riddler seemed like a smart but otherwise normal guy pretending to be villain. There's a reason he wasn't around for episodes like Almost Got 'im and The Strange Secret of Bruce Wayne: he simply wasn't a professional villain on the level with the others.

The 1995 film Batman Forever, although re-energizing the Riddler's iconic status, continued the Riddler's backslide.  Jim Carrey is a man of a great talent but he's not the person you hire to make a character seem serious, impressive, or threatening; he's the actor you hire to make your characters seem weird and unhinged... and easy to laugh at.


By the time Jeff Loeb (*shudder*) concocted (the word 'wrote' simply doesn't work here) the Hush storyline (Batman #608-619, "Hush", 2002-2003), he could readily portray the both as a pathetic unworthy relic ... and then pretend to fix it himself by having the Riddler be the secret mastermind. Which is Loeb's idea of a 'mystery', I suppose. But the only effect was reinforcing the image of the Riddler as an easily ridiculed joke; that was the only thing that made the ending 'a surprise'.  Particularly since the absurd mummy-faced Tommy Eliott character  beats the Riddler to a pulp leaving him a brain-damaged homeless man.

Judd Winick ignored this completely when briefly pitting the Riddler against Green Arrow in 2004 [Green Arrow #34-#39, 2004]. Winick (without actually writing a good story, of course), did demonstrate that he got the Riddler better than most.


But then almost as soon as it was over, human society agreed collectively and silently to forget pretty much everything Judd Winick had done with Green Arrow (and any other character). His mostly-on-target portrayal of the Riddler was the baby-without-a-ping-pong-ball-in-its-throat that got thrown out with the bathwater.

Elsewhere, 2005's The Batman cartoon (which gave a lot of new and, um, unique takes on classic villains) gave us an emo/goth Riddler.  I'll grant that it was an interesting look and take on the character but, in the final analysis, that Riddler was just a pathetic self-deluding puppy in love.


That same year, Shane McCarthy tried to fix the mess that Loeb had made of the character by giving us what everyone calls "the metrosexual Riddler", in a story that sees the Riddler go from a homeless and addlepated shell of his old self ... 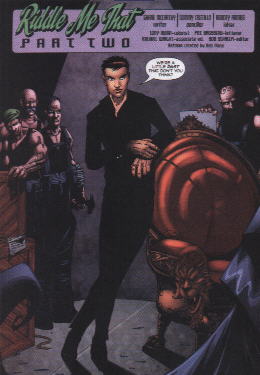 Honestly I liked the Metrosexual Riddler because (1) he seemed threatening and (2) he was indeed metrosexy.  But it was not to be, because another (this time Infinite) Crisis popped up in 2006.

Crises are the roombas of the DCU; sure, they clean your house's floor on a regular and programmable basis, but they do so unthinkingly and without fixing anything at any higher level.  This particular one put the Riddler into and then out of a coma, but now... REFORMED as an annoyingly vain attention-seeking private detective (because, I guess, Ralph Dibny was on vacation or something).  That, by the way, was a routine that had already been done the first time the Riddler was revived, during the Silver Age.


Eventually that got old, and because well-known card-carrying villains are more valuable than quirky annoying supporting characters, something exploded in 2010 to give Riddler head-trauma which restored him to his 'normal' criminal self.


As mentioned by this iFanboy article, Riddler was back on the road to greater villainy...


...until, of course, that was all cut short by the next multiversal reboot, the New52.

Are you sensing a pattern? Anyway, in 2014's "Year Zero" storyline, writer Scott Snyder went to great lengths to try to set the Riddler aright as a character is simultaneously a bit weird and goofy, attractive but not unnaturally so, annoying, and terribly terribly dangerous.


In this story, the Riddler basically kidnaps the entirety of Gotham for a good chunk of time, and he is NOT easily overturned.


This was followed with Tom King's "The War of Jokes and Riddles"(Batman Vol III, #25-32, 2016). King's version of the Riddler's was essentially the same as Snyder, but with a bit more of the metrosexual flair re-injected.


King, like Snyder, portrayed the Riddler as a very serious threat. In fact, he's portrayed as the obvious competitor to the Joker for Gotham City's top villain when all the other villains are forced to side with one of them;  such is the respect given pure intelligence.

As you have noticed from previous posts, I am no fan of either King or Snyder, but I'll give them this: as far as the Riddler goes, THEY GET IT.  And I thank them for treating him with respect.

Which, of course, didn't last long.  Because, as they say in the comics, "MEANWHILE"...

In a one-shot special this week that is part of current "Year of the Villain" storyline,


even our new Riddler is (yet again) presented (by writer Mark Russell) as a loser because of his schtick: 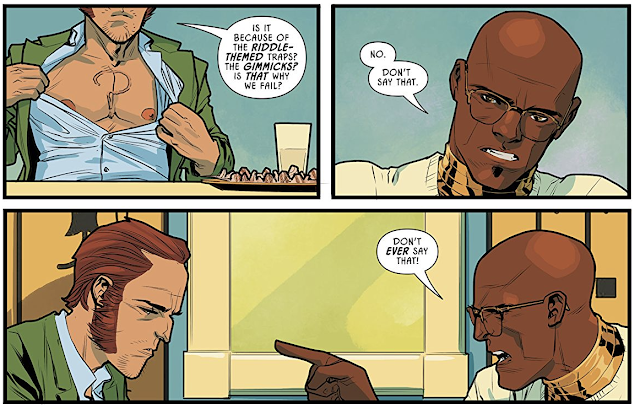 who comes to realize that he's a loser and needs to leave behind the trappings of his past villainhood to grow. Again.


I am afraid that through all this ping-ponging between goofy and threatening, the Riddler has become accidentally symbolic of DC's insecurity about not being taken seriously.  Marvel, whatever their faults, does not have this problem; they simply COMMIT to the idea that patently ridiculous characters like wingy-footed Namor and scenery-gobbling Dr. Doom are serious, powerful threats, any goofiness notwithstanding.

I'm afraid that DC is trapped in a pattern where every writer on the Riddler has to either show that "yeah, ha, look how GOOFY he is!" or "I can make him SCARY instead!" 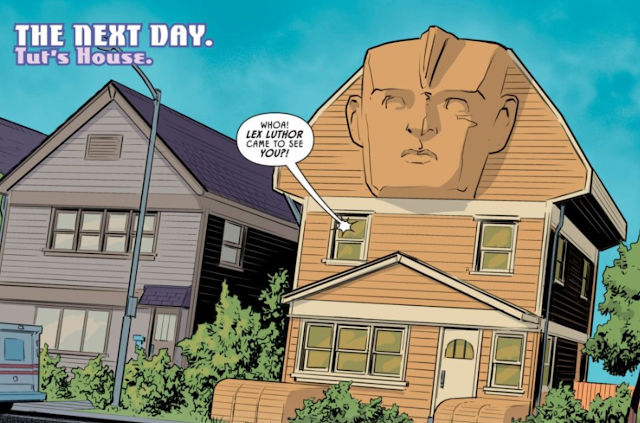