If you live anywhere near the DC metropolitan area, go to the Library of Congress tomorrow, where, in the Jefferson Building, they have an exhibit of some of their comic book collection.

Despite having lived in DC for 30 years, despite working on the Mall, despite having been to the Madison Building where these are stored about 10,000 times, I have never seen these comics. Until today.

I tried not to be That Guy went I showed up, wading through the streams of school groups in identical tee shirts.  But...it just kept happening.


"Here's a sheet that explains what the comics on the display are, sir, if you'd like."


"Oh, I'm a history teacher and I use comic books in my classroom; did you know the Captain America was fighting World War II before we were?"

"Uh-huh. And other characters were fighting thinly-veiled substitutes for the Axis even earlier, such as Superman versus Rakhal the dictator of Oxnalia or MLJ comic's The Shield versus the Moscovians.  You should read The Shield."


Well, he SHOULD. Everyone should. 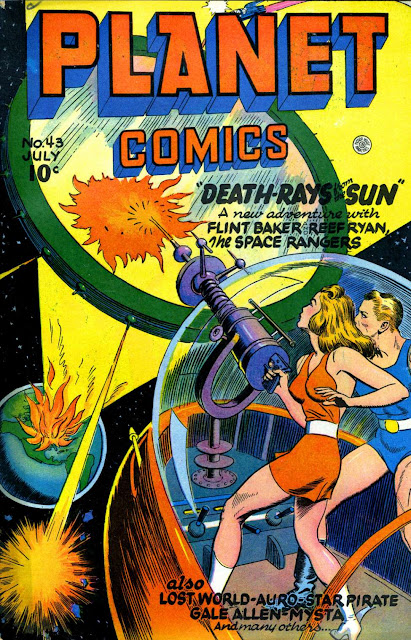 "And with that modern cover of Princess Leia compared to this early space comic book you can certainly see how the role of women in such literature has changed!"

"The princess is posing.  THIS women is firing a laser cannon at the threat. AND her clothes are less revealing than her male sidekick's.  There are certainly examples of sexism in Golden Age science fiction comics, but this isn't one of them."


Yeah.  I was TOTALLY that guy.

But it was okay. When some of the librarians realized what an obnoxious know-it...
I mean, a useful resource I could be, we exchanged info so they could consult with me about online sources for current comic book analysis and criticism.  I think they were also impressed by the fact that I was the ONLY person who said, "NO, I don't want to TOUCH the comics, are you MAD?!"

I don't think you should touch them, either. But I do encourage you to go to the exhibit, whose last day is tomorrow.

As the entire world mourns and remembers Adam West fondly, what more is there to say about the man? I was a very very little boy when the Batman live action show aired, it entranced me, and sparked my lifelong interest in DC comics. So if you have ever enjoyed ANYTHING on this blog, your thanks are owed entirely to Adam West.

Thousands of pages are being written about how his portrayal brought the character back from the precipice of obscurity and put 'camp' into the ordinary person's vocabulary.  I don't feel a need to add to those.

(Adam West's) Batman did not care what you thought about him. At all.

Adam West took Batman with deadly earnest.  Which is exactly how Batman takes Batman.  A billionaire dressing like a bat to beat up muggers at night and throw boomerangs at deranged criminals is a RIDICULOUS concept. Intrinsically.  The only thing that saves it from feeling ridiculous is the sincerity with which Batman does it. And nobody, I mean NOBODY, radiated sincerity more than Adam West.

It didn't matter what they made him do as Bruce Wayne; he was committed to its veracity 1000% percent.  Dancing the Batusi was exactly as sincerely in character for West's Batman as recounting his parents' murder....BOTH of which happened in the first episode, in case you didn't know.

West's Batman (and most subsequent Batmen) don't care whether you think dressing like a bat is ridiculous. He doesn't care whether you cynically deride Virtue, the Constitution, Mercy, Caution, Civic Duty, Driving Safety, Dancing, Nature Studies, or Foreign Language study.  HE understands and believes completely in these things and their value, and if you do not, he merely pities you (in a non-judgmental way, of course).  He takes those things seriously.

Michael Keaton's and Diedrich Bader's interpretations of Batman were dead-on and well received. Why? Because those comedians understood the importance of Batman remaining serious...whether you want him to invoke fear OR laughter.    Even LEGO Batman, the most overtly humorous screen interpretation of the character, has one central characteristic that is source of nearly all its humor: he takes himself very seriously, no matter how ridiculous his behavior or situation might be.

I have always felt that this is the essential conceptual conflict between Batman and the Joker; that Batman takes everything seriously and the Joker takes nothing seriously, without regard to the situations.  That's why, objectively, Batman is hilarious and the Joker is terrifying.  But that is perhaps another story for another time.

For now, I thank the late Mr. West for bringing sincerity to his role as Batman... and to everyone else's Batman, too.