Skipping over the highs and lows of the Supergirl show's season finale, let's go right to the cliffhanger at the end: the Kryptonian pod that lands on Earth, whose contents take Kara by surprise.

What COULD be in that pod? What do you think? 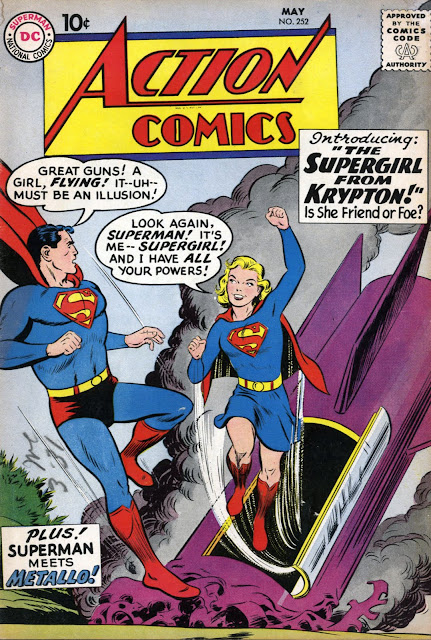 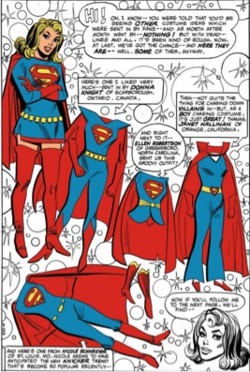 Everyone is focused on the new Superman storyline that leads from the New52 into Rebirth.  Superman is dying and is setting up a team of "super-substitutes" to take up the slack after he's gone.

With four replacements -- Supergirl (the search for whom is a plot point), Superwoman (now revealed to, somehow, be Lois Lane), pre52 Superman (Superdaddy?), and "New Superman", the Chinese guy who gets some of Superman's powers -- DC is clearly echoing the "Reign of the Four Supermen" that followed "The Death of Superman" in 1993.  And pretty cleverly, I think.  Whereas in 1993, Superman was replaced by four men (okay, actually ONE man, one boy half-clone, one cyborg half clone, and one...well, whatever the heck The Eradicator was supposed to be), now in 2016, he'll be succeeded by two men (an adult and a YA) and two women (an adult and a YA).

But this section from Vaneta Roger's coverage at Newsarama reminds me of a different old Superman Story:

In Superman #51, readers were shown a character in China named Dr. Omen, who was hacking into the Fortress of Solitude. (Apparently, there was a compromise created by the fusion of the Justice League and Stormwatch operational bases, or maybe it was because of Vandal Savage.) Superman's system booted Dr. Omen's system out, but not before she apparently got enough info to do whatever it is she was trying to do.
She then refers to a figure who's in some type of stasis chamber, "Your time to shine has come. All my dreams are on their way."
Then in Batman/Superman #31, "New 52" Superman is talking to Batman when they're both attacked suddenly by the "Four Pillars," the "embodiment of the Chinese zodiac."  One of the creatures draws blood from Superman with a claw, then teleports away.
It's all very mysterious. But it's probably related to the upcoming new title, New Super-Man, which launches in July and stars a Superman in Chinese culture who has been "infused" with Superman's powers.
Tomasi acknowledged that the New Super-Man is related to what's happening in China in "Final Days."  "Everything out of Superman #51, from the China stuff to… these are all threads that are all now tying together, right into all the Superman books coming out of Rebirth," he said.
So is that in-stasis figure the new Chinese Superman? And what does Dr. Omen have to do with it? And how does he get infused with Superman's powers?

Interesting.  A reasonable plot development.  A foreign power (or just someone in one) tries to 'bottle' some of Superman's body so as to copy it.

But I can't help be reminded of:

In the late 1970s, DC Comics was -- much like now-- all about the Bat-family.  DC liked extended dynasties generally (e.g. "The Superman Family", "The Shazam Family"); but they were particularly fond of the Bat-family.  That's what gave us stuff like The Joker's Daughter: 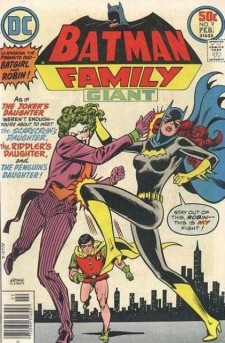 Gods help me.  I still love that storyline, I just can't help it, no matter how stupid it was.

It was in this period that Batgirl discovered she had a previously unknown brother, Tony Gordon. 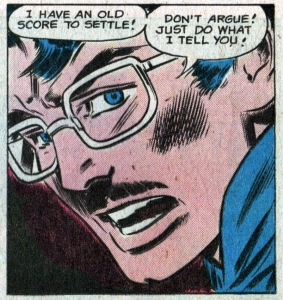 And that pornstaches, big rimmed glasses, and an air of presumptive authority are genetic.

Anyway, he was being held captive by the Chinese communist government for balloon-spying (because comics just love balloons).  He was rescued/escaped and got a new identity as a tour guide at the Smithsonian Air & Space Museum, where he runs into his sister when Captain Aero--oh, never mind, it's too stupid to explain.

The point is, eventually, she discovers his existence and as a result faces off against ersatz Chinese communist supersoldiers called; THE SINO-SUPERMAN. 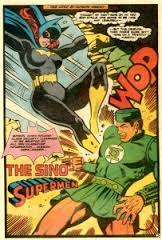 I can't imagine how this process helped make a Green Lantern.
Maybe instead of a power ring he just had an impervious skull. And of course... a Chinese Superman. 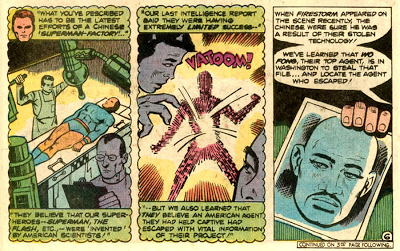 Anyway, the zapping process by which these people with superpowers was (of course) unstable, so as soon as they had used their powers once or twice...

Fortunately, they didn't care. Because they were Chinese, after all.  Dulce et decorum est, you know.  I mean, who wouldn't want to undergo a fatal procedure for a panel or two of superpowers, only to be kicked to an explosive death by an American congresswoman in high-heeled yellow boots?

The idea of a Chinese (semi-)Superman is certainly engaging.  But there are parts of this new storyline (like the ethnically themed Chinese Zodiac attack squad, the insidious Chinese scientist, etc.) that I find just too uncomfortable reminiscent of the Sino-Superman storyline, which its emphasis of Asian governments trying to steal and make poor copies of American technology (in this case, superheroes).

I am eager to read about this New Superman.  I just hope their keep him far away from Batgirl (and her boots).