The latest Heroclix output from Wizkids is the wonderful "Justice League 52" set.

The figures are dynamic looking. 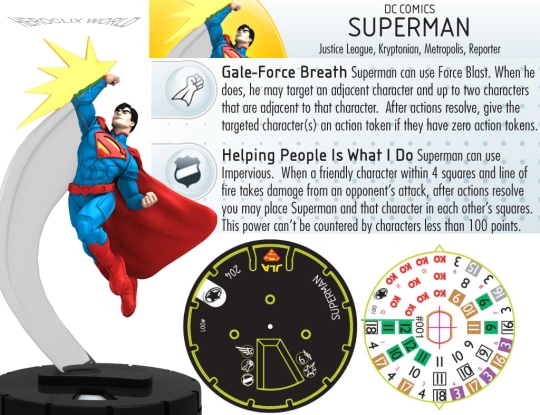 The traditional super-uppercut.  Think about; it's amazing how often Superman does that.

The dials are excellent. 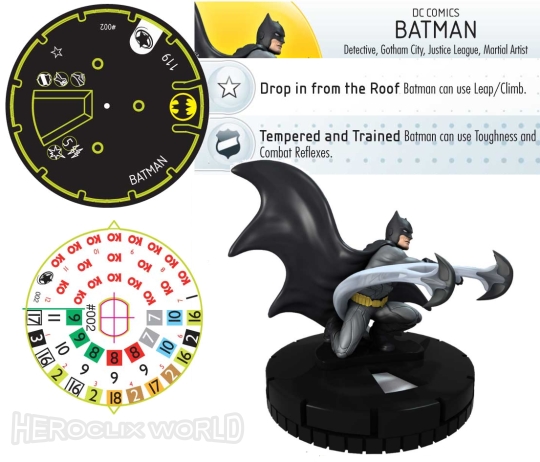 Once day, they'll just make a dial that says, "Batman can do whatever you need him to. And then he can sic trained bats on an opponent, as a free action."

The special powers are very evocative of the characters. 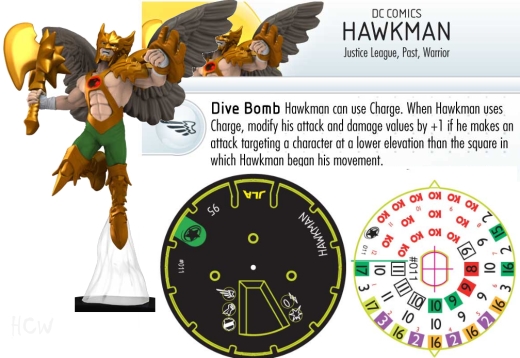 Heck, even they even managed to make a low-point Hal Jordan who's accurate, effective, but still an idiot: 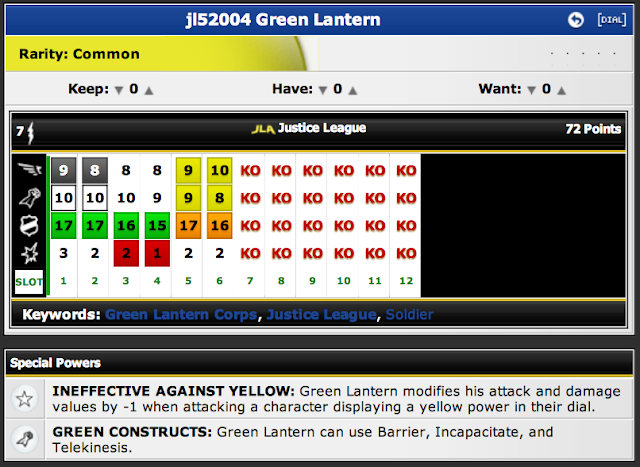 And in an even greater surprise, the new MAPS are good!  One is Paradise Island with the ocean running along its outside (Mera loves this) and the other is a very innovative Gotham Rooftop map (where I currently have Detective John Blake trying to help the Justice League defeat the Manhunter Grandmaster and his robotic minions).

To celebrate all the glories of the new Justice League Heroclix set, I have made a game map of the one JL-related location I have never dared to before: 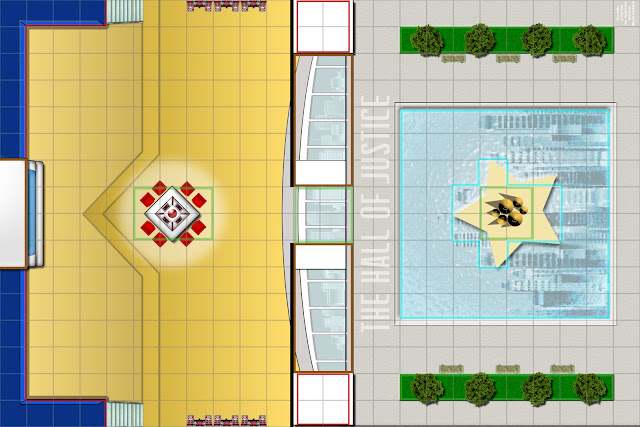 THE SUPER-FRIENDS' HALL OF JUSTICE

The Hall of Justice is a pretty simple space.  I mean other than the highly recognizable pill-box table and "the Troubalert" video screen, the Super-Friends didn't really have lots of furniture and knickknacks. It's not "The Living Room of Justice"; it's a HALL, people.

The outside of the building is, of course, ridiculously iconic, and I did my best to represent it, given the awkwardness of an aerial view.  Tactically, there's a little hindering terrain for Batman to hide in, some water terrain for Aquaman to splash in, and lots of open area for Wonder Woman and Superman to charge around in.  But strategically it's all about the small entryway in the Hall of Justice's impregnable front wall.

Ordinarily, walls and blocking terrain can be destroyed by anyone who can do 3 clicks of damage.  But I have given the Hall of Justice a trait that makes its hide nearly impenetrable.  It has the Heroclix Impervious power, reserved for super-tough characters like Superman.  Any damage done to it is reduced by two clicks, and when attacked it gets a "it tickles" roll; if it rolls 5 or 6 it takes no damage at all.  Plus, it has the Mystic ability, meaning that anyone who does manage to destroy one of its many squares takes an unavoidable and irreducible click of backlash damage.  In short, it ain't supposed to be easy to break into the Hall of Justice and it's probably more trouble than it's worth.  This will make control of that iconic entryway all the more important.

Many of the maps I design I never actually get printed for myself. But this one is too much fun to pass up, and I'm sure to get one so I can pit the Justice League against the Legion of Doom.  Or just to watch the Penguin slap Hal Jordan around like his bitch. 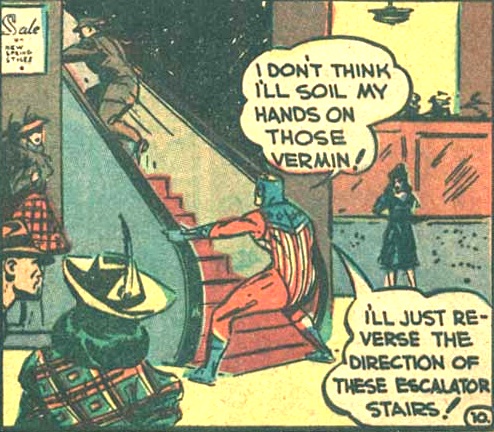 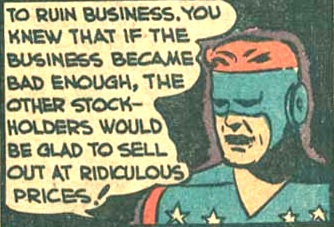 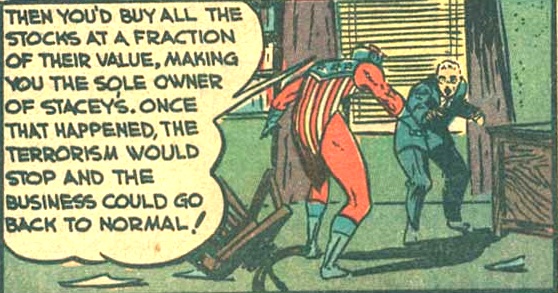 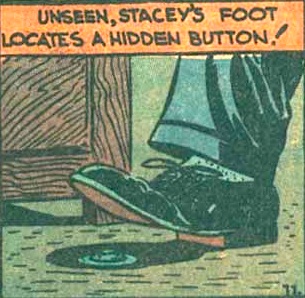 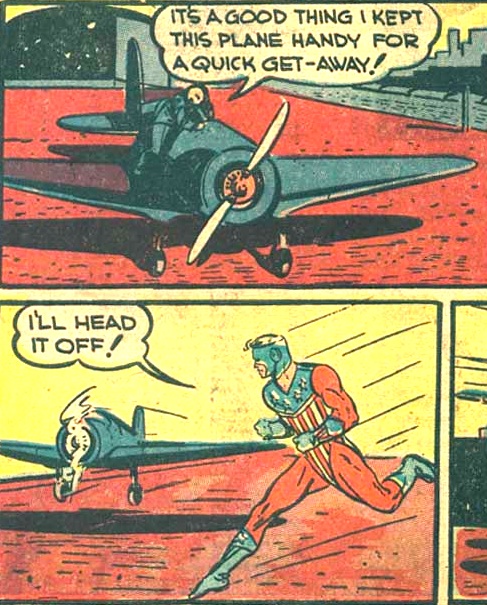 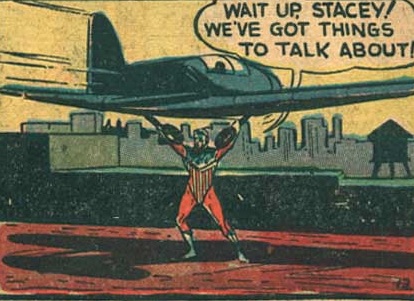 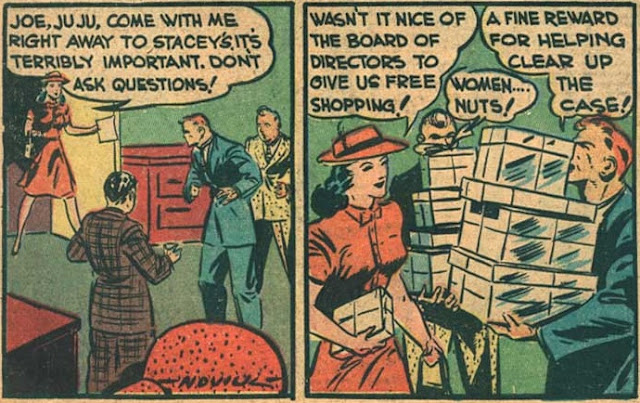 Shopping with the Shield 4: The Shield gets the shaft!

Well, I made fun of Betty for sticking her leg out the back window of her kidnappers' vehicle yesterday, but it turns out a dropped shoe was all the clue the Shield needed to track her down to the racketeers' hideout,  where he immediately indulges in some of his favorites schticks, including

bursting through walls, being set on fire, and, wait for it...

being strapped down on the Table of Pain and Pleasure. 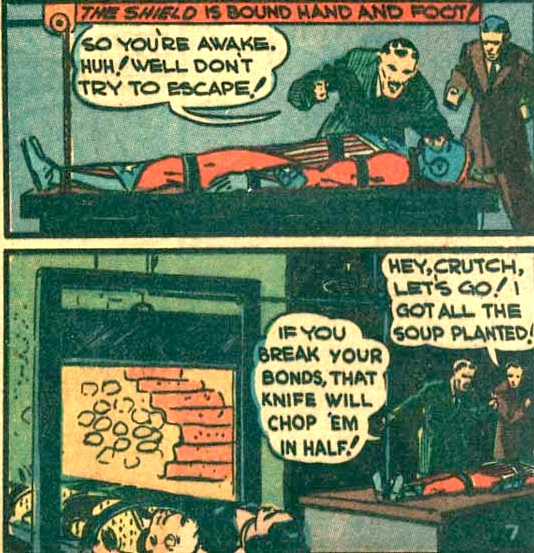 Really?  Will these villains never learn? 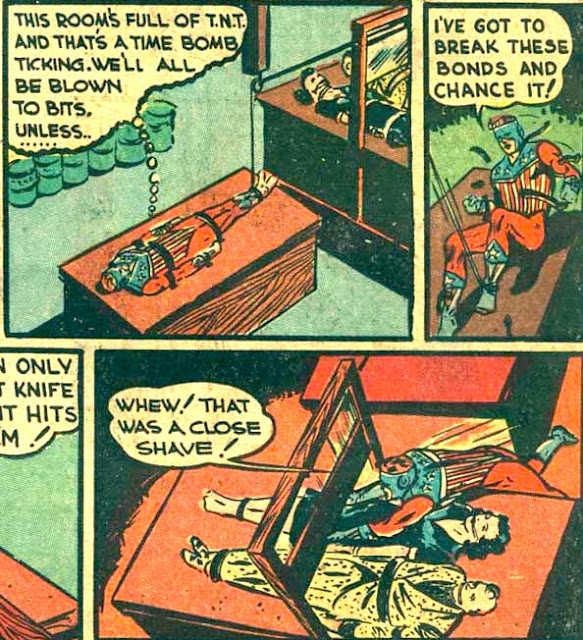 It actually not a bad trap, which takes advantage of the fact that although the Shield is nearly invulnerable, his friends are not. 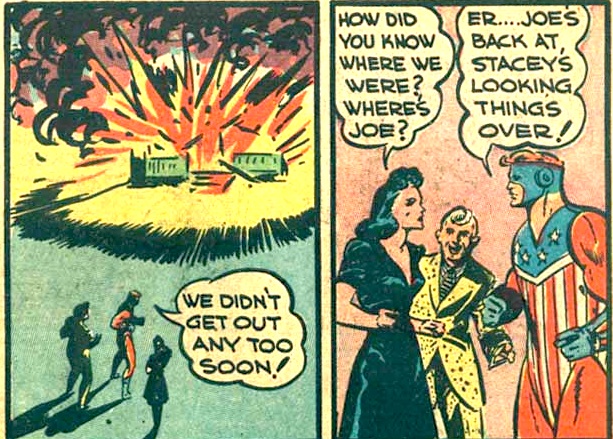 'Um... I didn't actually know where you were.  I just really like women's shoes and found this nice one and needed to find a match for it and, oh, I bet they have one at Stacey's; gotta go!'  Smooth, Shield, really smooth.

Of course, the Shield arrives just at Stacey's JUST in time to prevent another horrible tragedy. 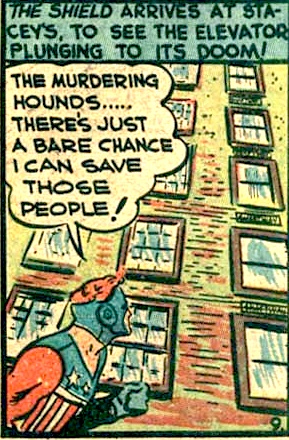 Stacey's is known, of course, for its famous open elevators shafts with windows to the outside of the building.  Really, just exactly how all this is happening is anyone's guess. 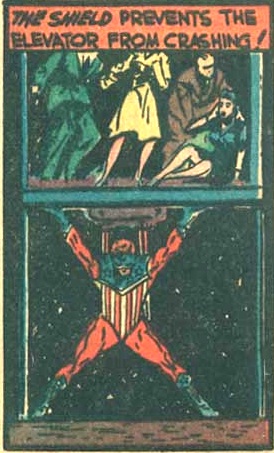 Shopping with the Shield 3: Tip for Tap

So, one dead elevator operator and one horribly murdered mother later, Joe has discovered that racketeers are behind the troubles at Stacey's Department Store.  Racketeering is all the excuse Joe needs. Mere murder is a matter for the local police, but when racketeering is involved FBI Agent Joe Higgins can butt his nose in. 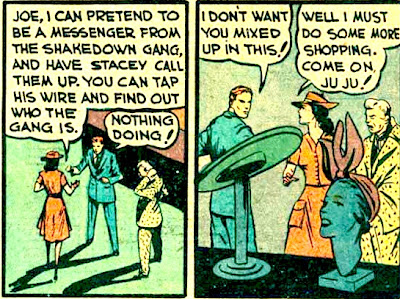 The latest in fashion: the Lockjaw Hat!  Not only is it a stunning look, but it gives you the ability to carry a primary attacker up to 12 squares.

Even though Betty's plan involves Joe's favorite hobby-- wiretapping-- he's having none of it, because it would expose Betty to danger.  But Betty Warren lives for danger and, as previously noted, does whatever the heck she wants.

So Betty, the little minx, ignores Joe and dragoons JuJu the G-man into carrying out her plan. 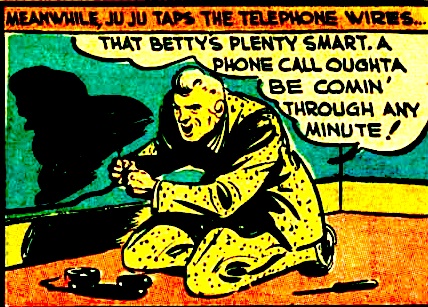 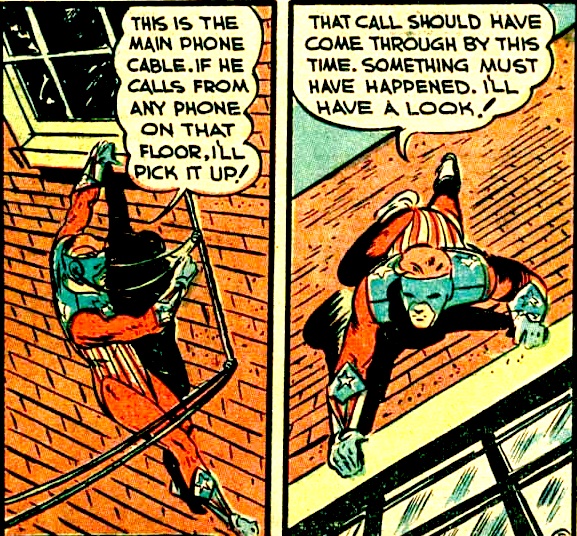 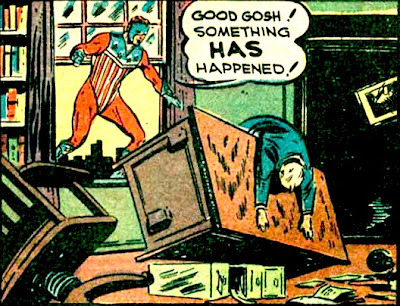 "Good gosh! Something HAS happened!"
"Oh, shut up, Niles, and help me straighten this place up before Dad and Daphne get back!"

Turns out that, while our junior G-men were being all stealthy with their wiretapping, the racketeers just walked in the front door, beat the crap out of Store President Stacey and kidnapped Betty.

But don't worry!  Ever-resourceful Betty will defeat them by...

STICKING HER LEG CASUALLY OUT THE WINDOW.

Well, at least now we have a clearer idea what Joe sees in Betty.
Posted by Scipio at 7:45 PM 5 comments: 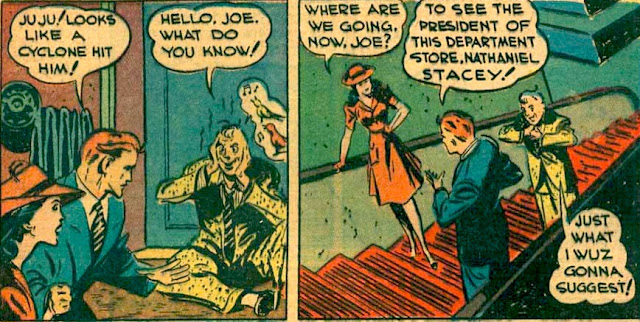 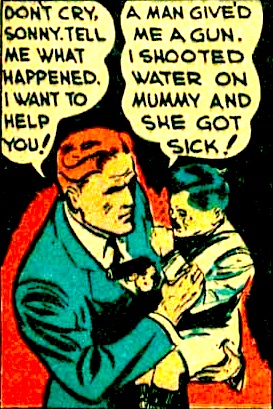 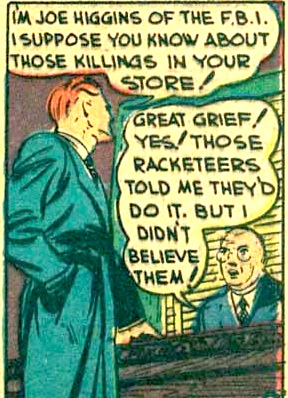 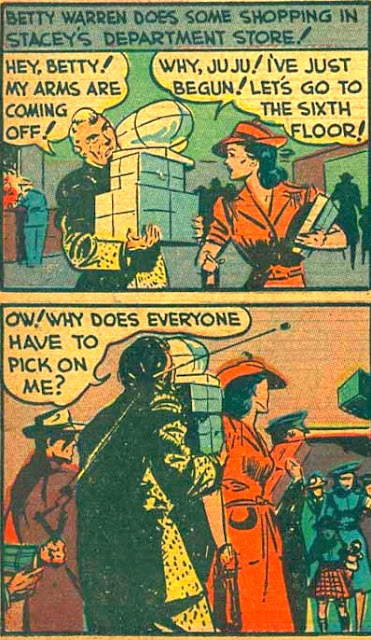 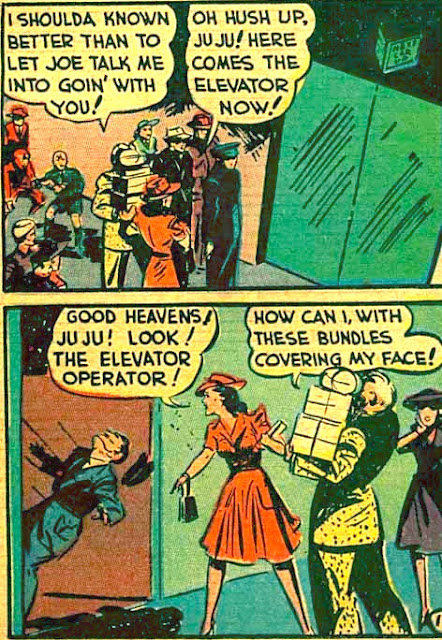 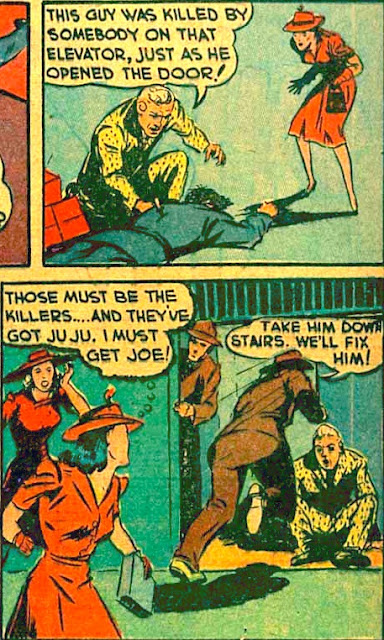 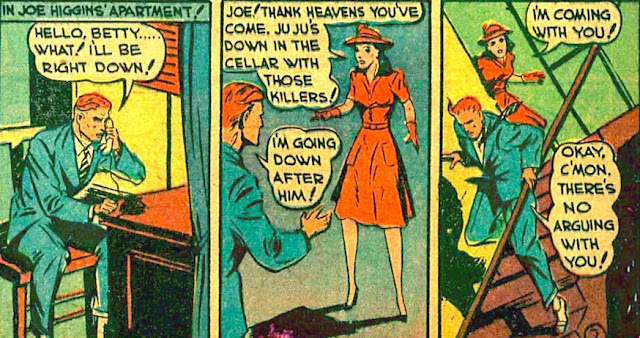