DC -- the city (District of Columbia), not DC Entertainment the comics publisher -- is full of fascinating neighborhoods, each with its own character.  Actually, so is the DCU, but I'm only talking about the DC my body occupies, not the one that occupies my mind.

I myself live in trendy Columbia Heights, which is "arguably DC's most ethnically and economically diverse neighborhood" (whose Civic Plaza is pictured below). 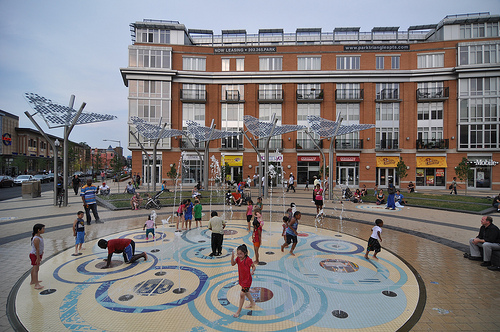 Children; shudder.  Fortunately, the fountains pretty much wash themselves.
Still, children in a neighborhood have one useful side-effect; they scare away bums, who are afraid children will set them on fire or tie tin cans to them.

One of my favorite DC neighborhoods is Chinatown: 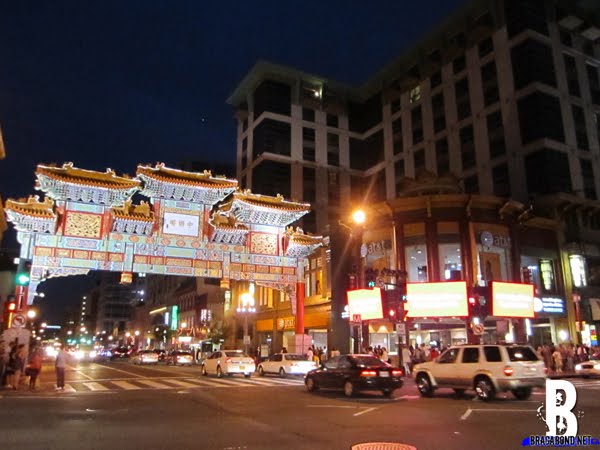 And that's WITHOUT make-up on.

I'll often swing by there on my way home (it's on the same subway line) just to have dinner or take in a film or simply soak in the crazy.  You see,  DC's Chinatown isn't just active; it's hyperactive.  If you want a family-sized helping of crazy in DC, go to Chinatown.  (P.S. Eat at Chinatown Garden; do NOT eat at Big Wong's.)  There are few DCers who do not have at least one bizarre anecdote that begins with, "So, we're in Chinatown, right, and then..."

Chinatowns are a great setting in popular entertainment, including superhero lore; both Metropolis and Gotham City of the DC Universe On-Line game, for example, have a Chinatown.  The colorful scenery, the unusual architecture, the bustling ethnic community, the air of mystery;  it's a great setting for a confrontation between the good guys and bad guys.

So I made a "Chinatown" Heroclix map! 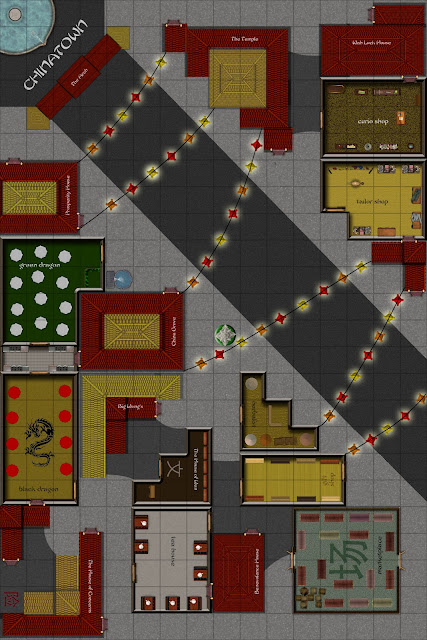 This isn't an accurate representation of DC's Chinatown, by any means. However, the arch is;  I used a screen capture from Google Earth to get the dimensions of it right.

My Chinatown is filled with some appropriate businesses (some Chinese restaurants, an herbalist, a tea house, a curio shop, and open-air market), including some nods to actual places in DC's Chinatown (such as Big Wong's and the Wah Luck House).

I've been trying to avoid using the 'neon outlines' method of marking types of special terrain.  On this map, the areas with green flooring (The Green Dragon restaurant and the Marketplace ) are hindering terrain, as are the shadowed areas in the alleyways.  Elevated terrain is marked by red roofing and blocking terrain by yellow roofing.  Special note: the elevated terrain of the arch can be walked or aimed "under", for obvious reasons.

Another special touch: even though they are interior spaces and can't be fired at from above, most of the business have ladders within them that provide access to the roofs of the adjacent buildings.  It's all very "Hong Kong" chase scene, you know.

I hope you enjoy playing on my custom Chinatown Heroclix map as much as I enjoyed making it.
Posted by Scipio at 12:45 PM No comments:

Well, well, well; Scott Snyder has brought us the return of “Batman’s brother”.  I'm not the first person on the internet to point this out, by any means, but I still thought I'd mention it here for those not in the know.

In the recent epic “Court of Owls” storyline, Batman author Scott Snyder has been drawing a picture of an unknown history for Gotham (one that is being embraced across the company’s line of titles, judging by storylines in the Bat-books, the JL line, and even outlying titles like All-Star Western).  The story has been powerful and colorful, although it suffers from a lack of logic and motivation.  For example, if the Court of Owls is already composed of Gotham’s elite, what’s with all the elaborate schemes and undead agents?  They already run Gotham and have for generations; what the heck do they WANT?  Their motivations are completely unclear, and they smack far too much of opponents created specifically to give the hero trouble, rather than independent characters with their own agenda, which the hero runs up against and then opposes.  I mean, really… they built an underground MAZE?  With hallucinogenic water fountains?   Rather than just shoot their enemies? How bored ARE these people?  They remind me of Senor Senor Senior on Kim Possible; they seem to be ‘rich people being villainous for the purpose of being villainous”. 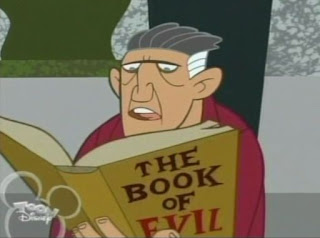 I would love to know who wrote that book.

At best, they are reminiscent of the thin-tied gangsters of Apex City who build giant mechanicalbears just to rob a bank.  It may be slightly crazy fun, but it is definitely fun, and it’s culminated in a development at the intersection of two concepts from Bat-history.

One, obviously, is the concept of “Owlman, the anti-Batman”.  Now, there have been a number of ‘anti-Batmans’ over the years; Cat-Man, Killer Moth (yes, really), Prometheus.  But Owlman is probably the most consistent and enduring ‘anti-Batman’.  Owlman, a concept originally introduced in the classic Crisis on Earth-3 story, was an evil Batman counterpart in a parallel universe.  Interestingly, he actually had a superpower, similar to Grodd’s ‘force of mind’; it was intended as a reflection of the fact that Batman’s brilliant mind was his greatest weapon.

That part of the concept didn’t last, and later iterations of the Earth-3 Owlman were simply ‘Batman on the wrong side of the law’.  There was a short-lived, “Earth-1” version of Owlman, instantiated as the son of Roy Raymond, TV Detective (an old back-up feature in DC Comics), whose skills were almost entirely deductive; he served as the in-house detective with the Outsiders. 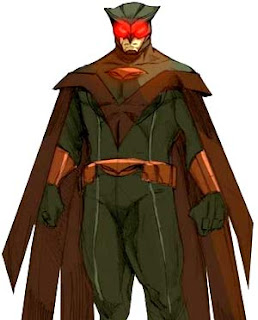 But on the whole “Owlman” has been “the evil anti-Batman”, as featured in Grant Morrison's Earth-2 and elsewhere. 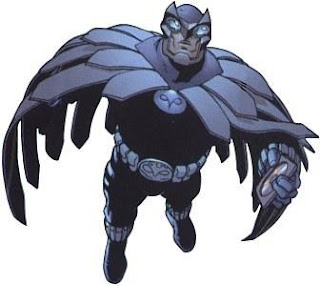 None of this should be confused, of course, with Dell Comic's Owlman, who was.... well, he was this:

The “Lincoln March” character in Snyder’s story is never called “Owlman” per se.  He is, in fact, "The Talon", a former functionary of the Court of Owls.  But that's just about as close to being called "Owlman" as you can get without the actual name.

The other concept is, of course, the idea that Bruce Wayne had an older, brain-damaged brother he never knew about because his parents had him locked away and kept him a secret.  That idea was originally one of the fever dreams of the ridiculously irreverent writer Bob Haney, who lived to defy continuity, convention, and common sense.  Which I suppose makes sense, since he himself is actually Spock's crazy brother, Sybok: 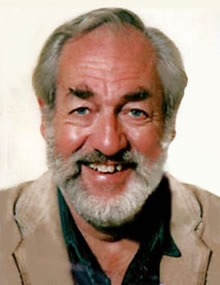 GIVE ME YOUR PAIN!

You can follow the first link in this post for more on Zany Haney's original tale of Batman's brain-damaged brother.  But suffice it say that in the character of the Talon, Snyder has cleverly given us a literary Reese's: two old Batman concepts that taste new together.

And iif  The Talon is Batman's brother, well....

at least it's not BANE.  But the less said about that story, the better.

Inspired by all the new DC Heroclix sets I've been on something of a tear designing new Heroclix maps to play them on.


Recently, I gave you the Alleyway Map (which I've already ordered for myself, because it's just such a basic for cops'n'robbers, and a staple for Batman fans).

and last time, I gave you the circensis Big Top map.  Now, as much as I knew a circus map needed to be made for the Heroclix playing masses, I doubt that I will have one printed for myself.  But this next one, I will definitely be getting printed for myself-- probably today, in fact.  Like the Alleyway map, it's such a sine qua non for proper Gotham-style conflict that I'm embarrassed I didn't make it sooner.


Why, what would being a villain in Gotham be like without.... 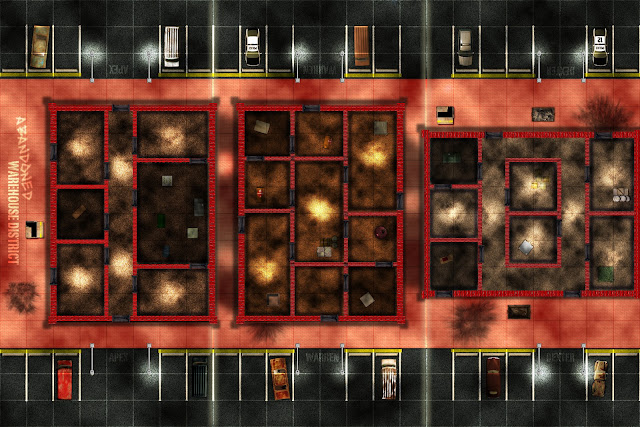 Oh, the shadows!  Oh, the lurkingness!


As in my other recent maps, I've tried to be subtler in how things like hindering terrain are marked.  It can kind of spoil the murky atmosphere you want in a Batman game to have neon green and purples borders around huge chunks of the board.  In fact, I haven't marked any terrain at all because it seems so obvious.  If there's some kind of object in a square, then it's hindering terrain.  Also, in each of the three warehouses (Apex, Warren, and Dexter), there are two particularly dark rooms with no light; those, too,  are hindering terrain.


That and the blocking walls of the buildings are pretty much it.  Note that I intentional put doors in the doorways.  Unlike Wizkids, which seems to think that doorways without doors in them are the rule in life rather than the exception, I consider the doors on my maps to block line of fire (although the do not interrupt adjacency, like a wall would).  This means there will lots of scurrying and hiding on this map; if you want to get your foes, you're going to have to dig in there and root them out face to face, rather than pick them off from 10 squares away with Long Ranged Combat Expert figures.


But there's a little something extra to this map, an idea that I've wanted to instantiate for quite some time:  it can be played as one regular sized (2' x 3') map, OR you can play each third of it (marked by the glowing white transversal lines) as a smaller  (1' x 2') mini-map.  I have often longed for smaller maps because the smaller teams I favor (such a member of the Batman family with some GCPD versus a single Bat-villains with some back-up goons) tend to get lost on a full-sized map.  So the Abandoned Warehouse District map is designed so that you can play a small game on any third of it, a medium game on either two-thirds of it, or a large game on the entire map.


If you play on less than the full map, place your figures along the outer edges of the parking lot to start (rather than at the traditional "goalpost" locations on a full-sized map).


The  map--and each of its segments--is designed to prevent the *ahem* "clusterfudge" that arises in many maps, where all the figures just rush into a big melee in the center of the board. You won't be doing that with those warehouses in the way!


Oh, and for extra "realistic" fun, you can start with your villains INSIDE the warehouses, and the good guys 'surrounding' them from the parking lot on the outside.  That will make your game seem more like a Gotham battle, and less like football with superpowers.
Posted by Scipio at 12:03 PM 2 comments: