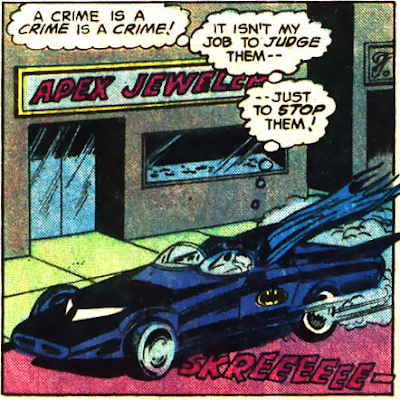 While in Apex City, Batman was asked to be a judge in
the annual Gertrude Stein Memorial Poetry Slam...
but he declined.
Probably goes there because he likes the weather in Apex. Hangs out with his pal, the Martian Manhunter, having lots of glum together. During the day they lurk about casting ominous shadows on sunbathers and handing out leaflets on skin cancer: "It isn't my job to judge them," Batman tells J'onn, "just to stop them." Sometimes the Phantom Stranger drops in, just to get together and prevent some laughs.
They stay up at night watching CSI: Miami reruns with the sound turned off, while they take turns riffing film noir voiceovers: "It was a hot and sticky night in the City of Flamingos, hot and sticky like a overweight drag queen's dress shields at Aqua."
Anyway, like any sensible man, I pattern my life as much as possible after Batman's (WWBD?)
So I, too, am in South Florida/the Keys this weekend with my very own manhunter. Catch you when I get back.
IF I come back!
Posted by Scipio at 7:09 AM 3 comments: 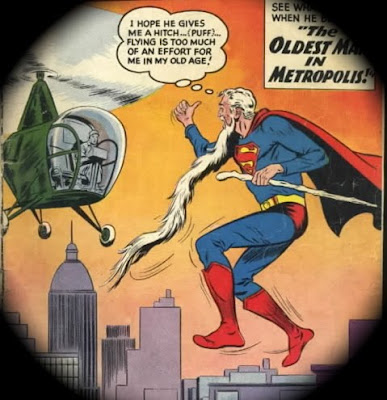 And, so, whether by accident or intention, a natural means has evolved by which writers & editors can simulate character development with
the Persona Cycle. 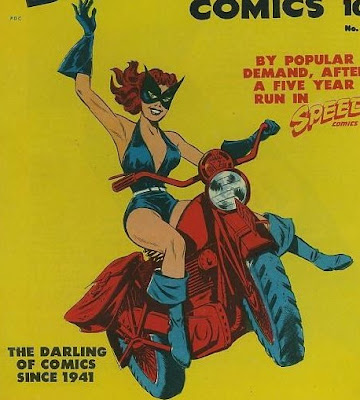 We've outlined the idea of the persona cycle before, but it deserves a deeper look, which will be doing in weeks to come with some major iconic characters (Superman, Batman, Wonder Woman, Green Lantern, Flash, Aquaman, Green Arrow, and the Martian Manhunter).
Okay, sorry... I'll correct myself: "some major iconic characters AND Green Arrow."
We'll start with Superman. If you choose to comment, please do not move on to other heroes whom we will cover in later chapters, class. Save it till then.
Superman has at least two obvious aspects along whose spectrum he cycles: The Alien Aspect and the Authoritarian Aspect.
The Alien Aspect is how Kryptonian-oriented his stories are. We all know that Golden Age Superman had only passing reference to his being from another planet, and those were just hand-waving to explain his superpowers. Even better known is how Krypton-crazy his Silver Age exploits were. 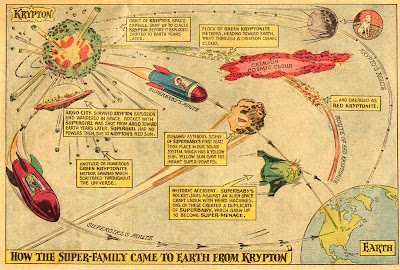 I know your first thought was "AWESOME WALL POSTER!"
You just know you are eating this up.
Don't fight it; just don't tell anyone.
The Authoritarian Aspect is, well, it's Superman's 'suck-up' factor. How much does Superman rebel against / represent authority? In the Golden Age, Superman was a sort of 'super-activist', breaking in the governor's house, dragging socialites down into coal mines, and knocking down slum with his bare hands. Compare that to, say, his portrayal as a presidential errand boy in "Dark Knight". 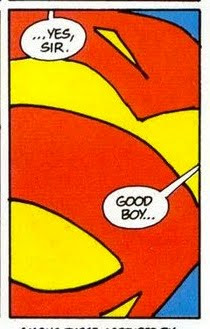 Is Superman a citizen of Earth or a Kryptonian visitor? Is he an extra-legal agent of reform or the ultimate American cop / boy scout? Of course, the answer to either question is a resounding "yes".
Clark Kent (a character in his own right) also has at least two such aspects: The Awkard Aspect and the Agro Aspect.
The Awkard Aspect is pretty simply: how much and what kind of a goof is Clark Kent?
In the Golden Age, Clark wasn't clumsy or naive in the least. He was a hip urban reporter. But he was a milquetoast. Now, that's by Golden Age comic book standards. All it really meant was that Clark didn't hit people in the face at every possible opportunity, and didn't resort to violence as the first step in problem-solving. 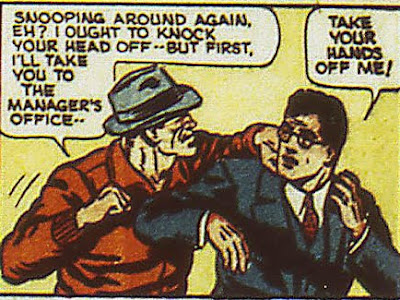 Clark being "mild-mannered".
In the Golden Age, people hit each other in the face a lot. 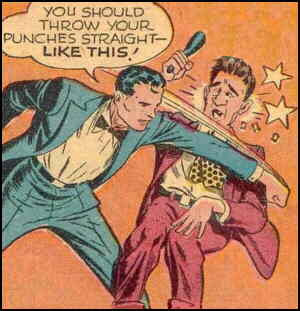 Ever wonder why your relatives in all those old family photos look so ugly?
Well, now you know.
What Golden Age comic books called a milquetoast you and I would call "normal'", "sane", or "civil". For example:
Does this guy seem like a milquetoast to you?

In the '50s television show, Clark wasn't wussy in the least. He was thoroughly confident, in fact. Clark on "Lois & Clark" and "Smallville" was certainly never a loudmouth, but he was certainly much more sassy than sissy. In comics of the 1980s and '90s, Clark wasn't awkward at all (as long as you embrace the Mullet Retcon). In the 1970s, Clark Kent the Klutz was the stuff of Awkward Legend.

The Agro Aspect isn't talked about too much, but I think that's a shame. That Superman bridges rural and urban American is essential to his popularity. Golden Age Superman may have been raised on a farm, but you wouldn't know it to look at him. He was a sharper dresser completely at home in the Big City, who went out on the town in evening wear; and what's more urbane than an investigative city reporter? But Clark Kent of the 1990s was very much a farm boy, running (flying, really) back to Smallville at the drop of a hat to stare out into the fields. Each version of Superman decides how much to play up Clark's rural beginnings.


Think of these various aspects as sliders on a big mixing board of character. You can create a whole different version of the character every time you reset the sliders to different places. Add in more sliders (say, "Running After / Running Away from Lois", "Use/Restraint of Power", etc.) and you start to get a sense of how much can be done vary Superman as a character while still keeping him recognizable.
And 'moving the slider' can be done without a jarring reboot. Superman spent last year off-planet on New Krypton, at the far "alien" end of the spectrum. Now that's being followed by Superman's realization that he's grown out of touch, so he's walking America, saving elderly poor folks, playing basketball, and fostering civic improvement.
This is part of why Superman (and any similar long-term character) works. He can cycle back at forth along various aspects over the years, being always recognizable but never quite the same twice. 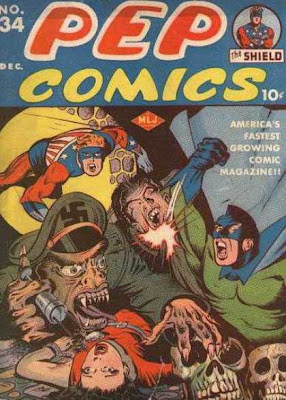 Under ordinary circumstances, The Shield would probably be just staring up at the sky and thinking, "How the heck did Rorschach manage to colonize the MOON? Damn that man's publicity manager!"

But the tribal tattooing of our moon is literally upstaged by a closer horror: the freakin' Hangman occupying the foreground of a Pep Cover. Meanwhile, poor The Shield is so shocked to be relegated to a Dusty-in-the-distance shot that he's dislocated his jaw in open-mouthed astonishment. "What th--?! This is MY comic, you finheaded freak!! And what have you done with Dusty's CAPE STARCH?!?!"


It's all part of the "Quiet Revolution", of course, by which the Evil One, the Living Avatar of Surrealism, the Hell-God Andrews will make Pep his domain. The Big Reveal will be that the Hangman was in the pay of the Riverdale mob all along, undermining The Shield's position and authority in preparation for the takeover. As Darth Vader is to Emperor Palpatine, so is the Hangman to his lord and master, Archie Andrews.

"Go, Hangman, and do my bidding!"
P.S. Oh, yeah, and also the usual Pep cover regulars of a bound chick in a red dress, menaced by syringe-wielding Nazi vampires, two great tastes that taste great together.
Posted by Scipio at 11:34 AM 4 comments: